How to measure the contrast between any given color and white?

When displaying white text on a colored background, I guess that the text is more-or-less legible depending on some kind of contrast between that color and white.

My question is, is there a formula to measure such a contrast?

The following is an example of what I'm asking about.

You can see these colors here https://jsfiddle.net/evkep9g9/ and here:

IMO the white-on-blue text is less easy to read than the other two.

Is there a formal which measures that contrast, which shows the white-on-blue is less readable?

I've tried to read the Wikipedia article on HSL and HSV but didn't really understand it.

Without understand H, S, L, and/or V, still I expected to find that one of them was larger (i.e. whiter) in the blue than in the other two.

But that's not the case:

I'm guessing that there's some "contrasts with white" attribute that measures how well white text should contrast with a colored background.

What is the name of this attribute, and how is it calculated, given that the attribute doesn't seem to be S or L or V?

I accepted this answer, whose numeric result seems to match my subjective impression (that the blue has less contrast).

The reason why the 'blue' in this OP has less contrast is actually because it has so much (bright) green in it.

This formula which I accepted (in the answer below) is not explained in any detail (it's easy to miss) in Wikipedia's HSL and HSV article. The closest that article comes to being relevant is this:

In summary the attribute might be named the "Luma" and designated with the letter "Y", but the formula for calculating it varies (perhaps depending on the palette chromacity). The accepted answer below is from and for the World Wide Web's definition of RGB.

The attribute you are looking for is “relative luminance,” L, which, for a standard monitor, can be calculated as:

Where Rg, Gg and Bg are R, G, B values transformed as follows:

Using the formula above:

From this we see blue has the worse contrast with white (its relative luminance is closest to white's 1.000), followed by orange, then pink. As you intuited, the more contrast, the easier it is to read the text. You can calculate the contrast ratio as

Where L1 is the L larger relative luminance, and L2 is the smaller. So:

They're all pretty bad.You want a minimum contrast ratio of 4.5. Seven is preferred, especially for small text like you have in your example. Those are standards from the W3C Accessibility Guidelines, but it’s a good rule for “typical” users too. You can darken your chosen colors* but that will change them considerably (your orange becomes brown, your pink becomes mulberry). With these colors, the easiest way to get acceptable contrast is to use black text. That will have a minimum contrast ratio of 7.99.

*As an aside, you may want to suggest to your boss that high-saturation background tends to look really garish. Is that really the effect he wants? Is this a party web site or something?

According to the WCAG 2.0 web accessibility standards, the contrast for a text and background color should be a ratio of at least 4.5:1. Their checker shows your current background colors as being too light. I have taken screenshots of the differences: 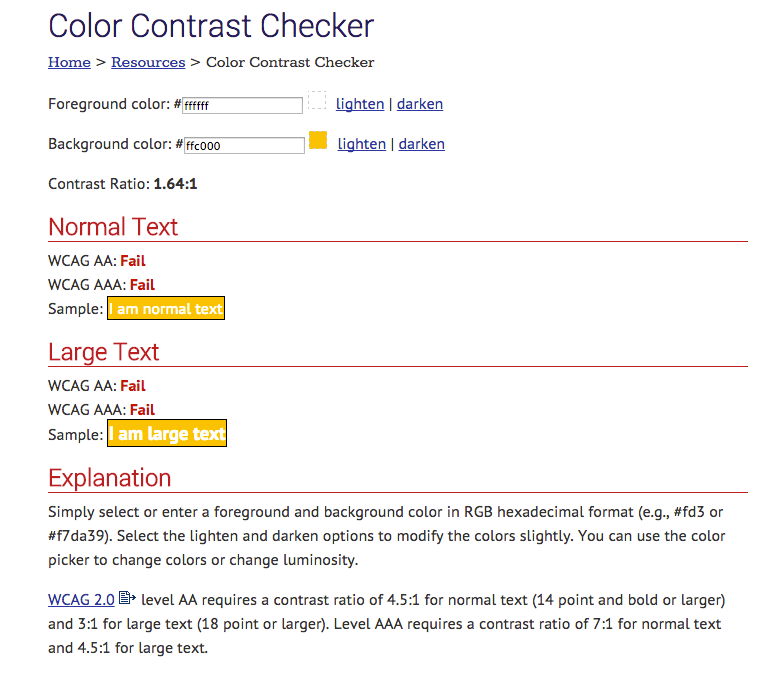 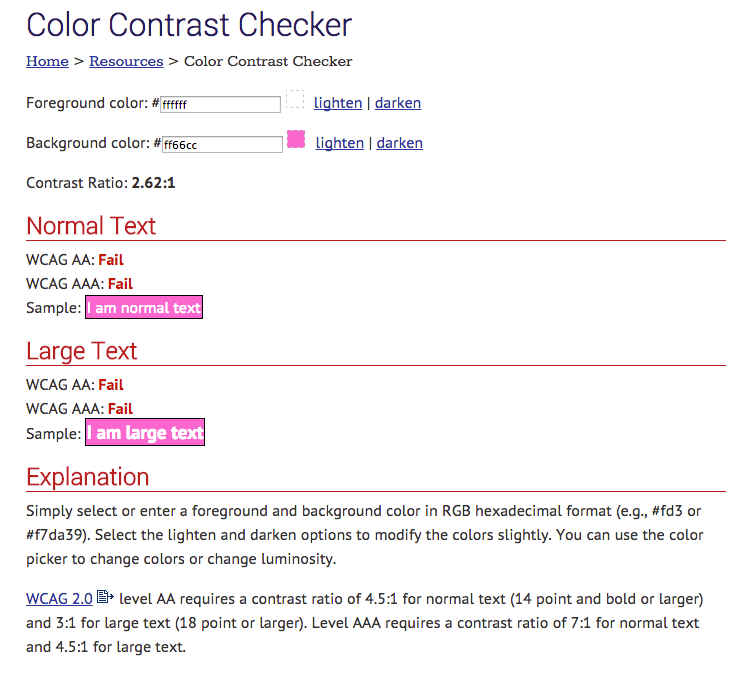 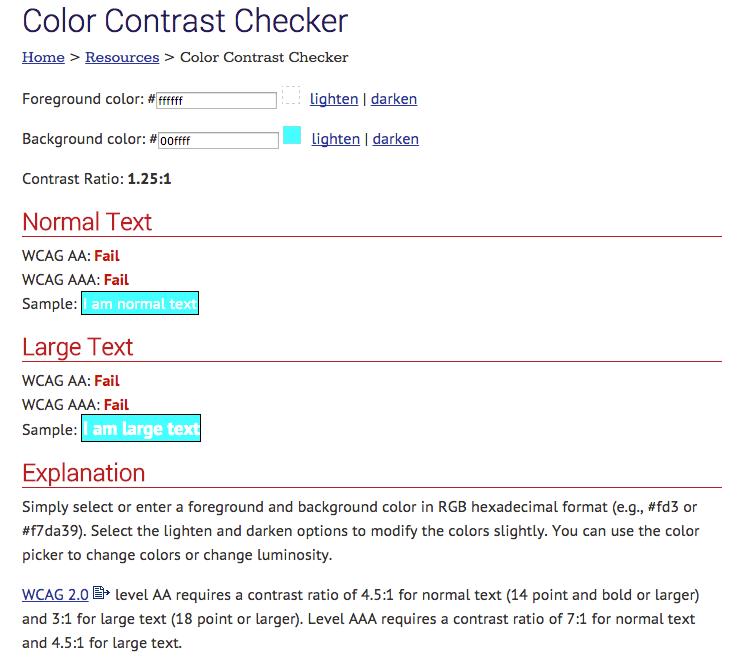 There is not enough contrast between the background color and the text. If the eye has to strain to read the text, the website will not be very effective, and people with disabilities will be able to read it even less. 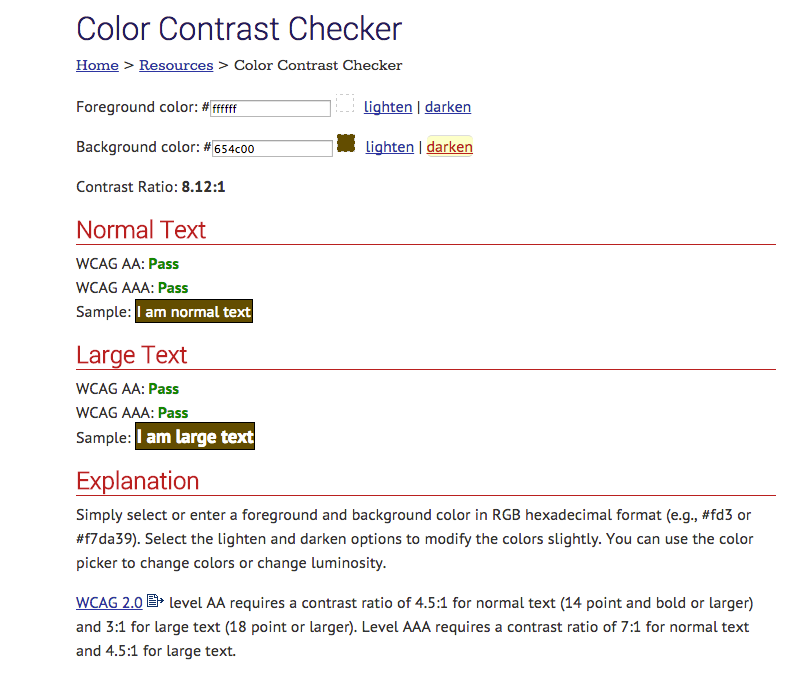 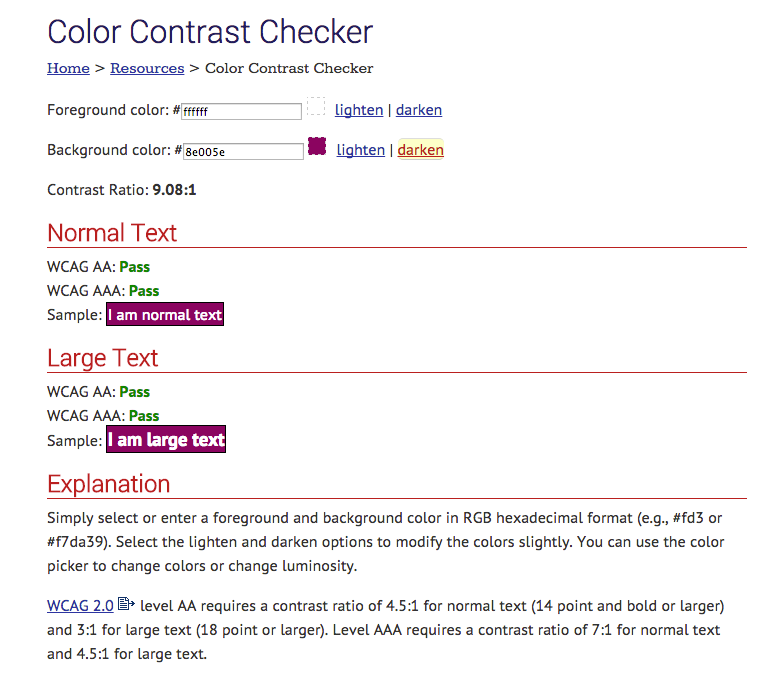 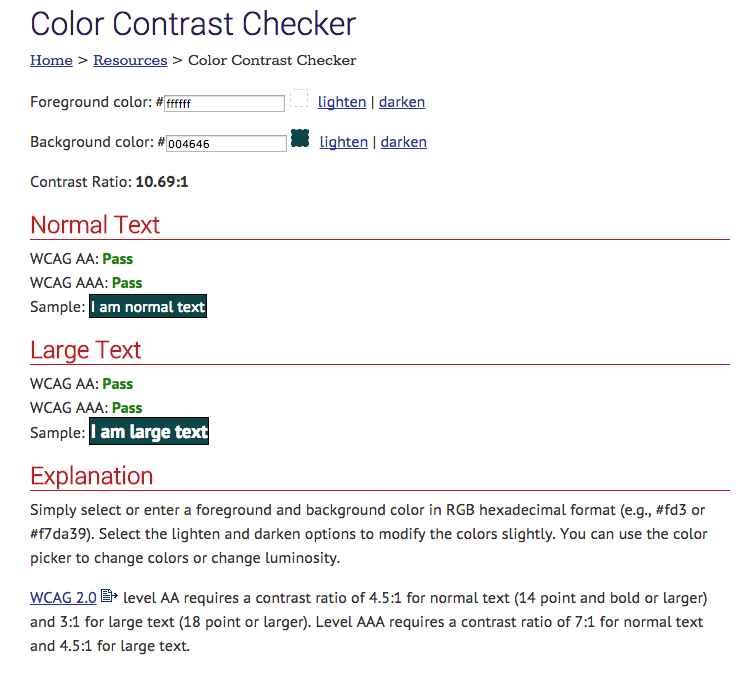 Alternatively, you could just use their AA ratio rating for large text (above 18pt), which looks like this and gives you more opportunity for variation in your design: 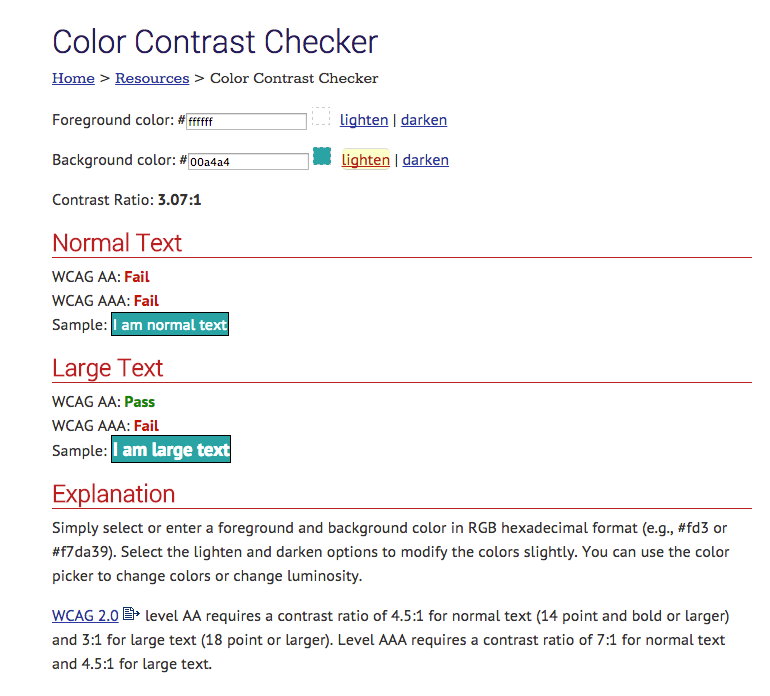 I think you're a bit confused here. HSL stands for Hue, Saturation, Lightness. If you need to know white= 100% Lightness. So the opposite to white is still L, only that at 0% (thus if you use any value for H and S, then add 0% for the L value, you'll get black).

You can see the w3 recommendations with examples here

As for HSV, it's a bit more complex, because the V (Value, could also be B for Brightness), while it's still black at 0%, if you set it at 100% it could be white or another color depending on saturation value.

Either way, you can see both these methods deal with brightness, so your boss seems to be more or less on topic even without any scientific backup!

As for your specific colors, they have no relation with your question so really don't understand what you mean, but in short, to answer your specific question, the opposite to white is black, and whether you use HSV or HSL, it will always be 0

If you want to check the readability of text in contrast to the background use the following link - webaim.org/resources/contrastchecker

It will allow you to easily identify whether there is enough contrast between the text and background to determine if people with visual impairments can read the text. It also helps with meeting Level AA (or AAA) standards for WCAG 2.0.There are guidelines on the page which will tell you if there's enough contrast (in your case 4.5:1 ratio would be ideal).

Please use http://contrastchecker.com/ to check if the color combiantion of foreground(text) and background passes the WCAG criteria. Website lists 6 criteria for which you can check your combinations.

You can test foreground and background colour combinations with the Snook colour contrast checker.

http://snook.ca/technical/colour_contrast/colour.html It gives you various results including whether the contrast passes various WCAG compliances. 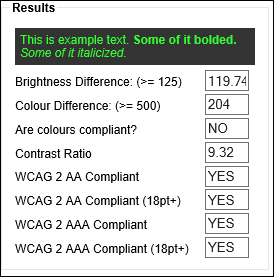 N.b. This is recommended by the BBC for their designers to follow

Test every foreground and background colour combination against the Snook colour contrast checker Every combination must pass against the WCAG 2.0 AA standard http://www.bbc.co.uk/guidelines/futuremedia/accessibility/html/colour-contrast.shtml

1
what color besides black and white are, measurably, most easy to see?

7
On TV, when you see an infomercial, why do they use jarring colors?
7
Studies on color for the elderly
1
Choosing the right background color (Contrast issues)
29
Formula for color contrast between text and background
5
Contrast ratio for button background color?
0
Colors VS Screens - Colors to avoid
1
Color Palette Accessibility for White Text Button Labels
1
Adjusting for color difference between monitor and TV
2
Why define opaque color as partially transparent?
1
Are there any existing algorithms to measure the readability of text and background colors?