“Product Comparison” style page when many fields are expected to match and too many “products” to show at once?

We have multiple systems that contain clients. We're working on a new system to combine these clients into a single system. Our current layout is very much like a product comparison page.

The problem now is that we're incrementally adding in existing systems one at a time. The last count was 7 different systems. It also turns out that a client can be in some systems more than once. In the end, only one instance of a client will exist in the Combined System. We obviously can't just keep tacking on columns for each time a client appears in any system. Our first idea was a dropdown in the column header with each system being a choice:

If we went with this, it's the least amount of work for us to change the existing page but I'm not sure that it properly caters to the users of the site. I feel there's something wrong with putting them in a table because we expect many of the values to match. A client only has one Date of Birth or SSN as well as other fields I'm not showing. I think the norm should be to only show redundant information one time and the exception is to show where two different systems differ but I don't have a clear idea for how the UI should actually present that in a clear, reliable way.

Not 100% sure I'm understanding the issue but instead of adding columns or only showing the unique data why not merge the fields that have differences and display those as dropdowns? Like this: 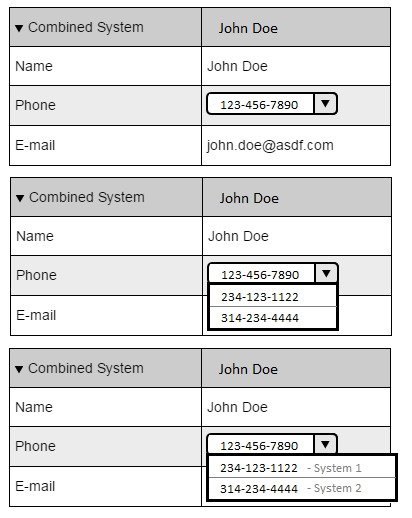 That way you will only have one column for each person to save space.

EDIT: just realized I have a name column and row, so ideally flip the axis so Email, Phone, etc. are column headings and "John Doe" is the row heading. The dropdown UX is the main point of this answer.

Not the answer you're looking for? Browse other questions tagged presentation or ask your own question.