Why do web sites display dates in an inaccurate representation e.g. “a year ago”?

Many sites will display dates or times in an inaccurate representation like 1 year ago instead of just displaying the actual date. Here's a case I found to be particularly annoying: 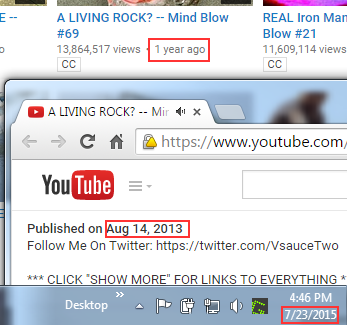 This video mostly contains lots of news of recent scientific research, so seeing that it's off by 11 months makes me less interested because it's almost twice as old as it was being reported.

Why do sites do this? I feel like this is a bad user experience and I would rather just see the actual date than some estimation that could be really far off.

Imagine you’re telling a friend a story about a time you took a flying class. You want to give an idea of when the story takes place. What format should you supply the time in? Should you say “The date was 2014/12/31 and the time was 16:05:03 PST”?

Of course not. The point of the story isn’t the exact time you took the class. You want to focus on communicating the experience of flying an airplane, maybe a humorous anecdote about a mistake you made in the air. Being overly specific here would be strange and distracting—maybe even a little concerning.

Computers should behave like sane, helpful humans, just with a few computational advantages. When talking about most YouTube videos under most circumstances, the exact post date is irrelevant. If a special case warrants more precision, you can open the video page itself and see the date. Good job so far, YouTube.

However, there is a problem here.

The actual age of the video you mentioned is 1 year, 11 months, and 9 days—which is not even close to the advertised “1 year ago”. YouTube should have said 2 years ago. That’s what a helpful human would do.

Not enough reputation to comment, but on many sites with this "friendly" time, you can actually hover to get the exact time.

Try it over on this question's "asked" and "active" times on the right hand side.

This is the use of relative timestamps. In relative timestamps, accuracy isn't important, and immediacy of scanning prevails over accuracy, so things like this may happen, where you see "1 year ago" until Aug 15, 2015, where you'll see 2 years ago. There's a lot of controversy about this approach, and IMHO, it's correct that you could add something a bit more accurate, even if using relative timestamps, for example, measure the time in months, which could be an acceptable mid-way between accuracy and eye-scanning. But if you read the Adaptive Time Units section, you'll see that what you're getting is the norm, not the exception.

However, when you make an UX decision, some of these decisions have a trade-off cost, and I bet YouTube knows what's going on. But they may have a very small number of people perceiving your issue as a problem, and a HUGE number of people who will prefer a fast scanning data display. Thus, you get less accurate dating by weight of numbers

You've caught a common bug (IME) in the implementation of these relative time/date stamps -- at a step-change in the precision you lose a lot of information due to rounding, and the rounding is always down.

It's common (I assume due to a built in library) on Android apps to get "59 minutes ago" (more precise than needed) then "1 hour ago" displayed for the next 60 minutes (less precision than needed). If it was up to me I'd code your example to give "23 months ago". That's not to say I'm right though. Another option might be to give "just under 2 years ago" or "about 2 years ago".

As for UX reasoning, I would have thought that time zones would come in to it: throw the time posted and the user's time, both with time zones, at your standard date/time library to get a difference, then round. The user doesn't have to care about timezones then. Of course you could convert everything to the user's timezone (I've assumed you know it already) and present that but it's not necessarily helpful. Imagine a headline and timestamp "News just in: Mass pile-up in the morning rush-hour. 16:50 today".

One plausible UX reason for this is preventing the situation where a user sees a date, fails to notice the year, and due to the proximity of month/day, assumes that the post was made within the past few days/weeks rather than (possibly many) years ago. This sort of user error can lead to embarrassing answers/comments/follow-ups on content where they're no longer relevant.

From reading this page we can all agree that we disagree on which is the best thing to display because there are some many different scenarios and segments of users to satisfy while the only available action is display.

First of all generically in my humble opinion any rendering of any timestamp should include your display format of preference that will be more suitable for the most use-cases being "almost 2 years ago", "more than 1 year ago" etc. and also the exact timestamp with an accuracy of a second (given that transparency of such data is ok).

So if you have this kind of information I would consider creating a browser add-on to give power to the user who requires it and change the text that displays the date locally on his or her machine. Boom! You have given a toolkit to the user and more often than not toolkits can bring an awesome user experience.
One implementation that comes into mind is for this add-on to add a small icon (as most of the add-ons do) and then start scrolling on the icon to swap between the different precisions.

Relative dates are terrible. Exact dates are best, and do not require refreshing the web page to make sure the relative date is correct.

Not the answer you're looking for? Browse other questions tagged dates representation or ask your own question.