What's the purpose of "This page is intentionally left blank" we see in books?

What's the purpose of "This page is intentionally left blank" we see in books? Why not just leave the page blank and write nothing on it?

This wikipedia page sums it up quite nicely https://en.wikipedia.org/wiki/Intentionally_blank_page

Such pages may serve purposes ranging from place-holding to space-filling and content separation.

And the reason I see it most often

Intentionally blank pages are usually the result of printing conventions and techniques.... Book pages are often printed on large sheets because of technical and financial considerations. Thus, a group of 8, 16, or 32 consecutive pages will be printed on a single sheet in such a way that when the sheet is mechanically folded and cut, the pages will be in the correct order for binding.

They are marked "intentionally left blank", of course, because they don't want readers to worry that a printing mistake has left them missing something good. http://www.quora.com/Why-do-books-sometimes-have-pages-marked-This-page-intentionally-left-blank

You don't see it in all books. You sometimes see it--usually in books that are more academic or legal in nature.

Essentially, it's nice to have in a publication where a user might expect there to be content on that page. A standardized test, or a legal contract are examples where every page needs to be accounted for--even the blank ones that are there.

It is very useful with single sheets being printed on both sides, where you want to be able to update the sheets.

You would have pages 1+2 printed on one sheet, pages 3+4 on one sheet, and so on. If you made a change and a chapter changed from 12 to 13 pages, all the following pages would need to be reprinted as well. Instead if you want to insert a single page, you either use an empty page, or you insert a whole sheet with the printed text on one side and an empty page on the other,

Printing sheets are done with 8 or 16 pages. This arrangement is much more important in offset printing. If there is any added or deleted context, pages shall be re-organized. Extra empty pages may be added for keeping the same production line.

For not confusing the end user, these empty pages carry that message instead of just being empty.

It can have another explanation for this:

Most people read books from left to right
~> the page which is needed to turn is on the right
~> when scrolling a book, the right page is easier to see
~> title of a new chapter should be on this page
~> if the previous chapter has its last page on the right too, there will need a blank page before starting a new chapter 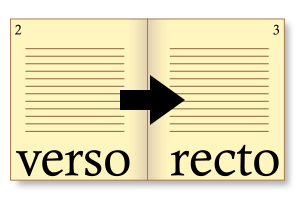 See recto and verso in Wikipedia

Especially in ebooks it is a nice way to let the reader know that he/she isn't missing something, there is nothing wrong, the blankness of the page really is intentional.

Some kinds of work are printed "as a unit"; before a group of pages is printed, the number of pages preceding it will be known. If a particular printing press is set up to print groups of 24 pages and there are 202 pages before the first page of Chapter 12, then the group containing the first page of Chapter 12 will also contain ten pages from the previous chapter. If that preceding chapter had ended on an odd-numbered page, the publisher may have decided for purposes of appearance to add one blank page (so as to pad the total number of preceding pages to an even number, and meaning there would only be nine pages of content from the previous chapter) but there would never be a need for more than one blank page. Further, if the publisher adjusts page boundaries to avoid having a chapter end with a precisely-filled page, a reader will clearly recognize that the end of one chapter has been reached, see the start of the next chapter on the page facing the blank page, and never have reason to believe--even for a moment--that anything was wrong with the book.

Some other kinds of work are not printed as a unit, however, but instead have different sections printed at different times. For things like unbound newspapers, there's no need to know now many pages will be in the first section before printing later sections (on most newspapers, the first section of the paper is actually the last one printed, and later editions of the paper will combine later-printed first sections with earlier-printed inside sections), but for some kinds of bound publications it may be necessary that sections which are swapped out be replaced with others containing exactly the same number of pages. If a section which had been allocated 48 pages ends up having only 27 pages of content, it may be followed by twenty-one blank pages. Someone who encountered 21 blank pages might quite reasonably be concerned about whether there was a printing problem; marking that the pages were deliberately left blank would serve to allay that fear.

Note that in many cases where there were never two or more blank pages consecutively, readers probably wouldn't care if none of them were marked, but readers may care if some blank pages are marked and some aren't, or if there were any large runs of blank pages that weren't marked. If the first section printed ends one page short of its allotment, the printer may have no way of knowing whether later-printed sections will end with large runs of blank pages. Since the first page of that section will need to be marked if it becomes necessary to mark blank pages elsewhere, it's simplest for the publisher to mark it preemptively.

You all missed one point. It's true that blank pages help reduce cost of pre-pressing. However, more relevant answer to such a question touches on the issue of securing the printing. That is, every industry standard printing machine is required to print special invisible to human eye codes that help identify the manufacturer, machine, cartridges, and so on. It is true even for any colour laser printer one can buy in a shop (in such a case hidden codes are layered with yellow cartridge).

Consequently "...this page is left intentionally blank..." text informs potentially knowledgeable reader/person that no hidden codes have been applied on a particular page. So it is truly blank.

Not the answer you're looking for? Browse other questions tagged physical white-space books or ask your own question.

6
master/detail view blank state/detail view when nothing is selected
18
Is a book more user friendly than an e-book?
34
The reasoning behind book dust jacket while there is a hardcover
0
Should whitespace next to forms be avoided?
9
The Right way to Write
215
Why do many sites leave half of each webpage empty?
5
What is the best UX for ebook reading?
6
How to handle bookmarks in Reflowable books