How many interactive controls is too much on a mobile game screen?

I'm making a screen for a mobile game (strategy like)

This screen is a bunker management screen and I'm afraid there are way too many controls rushing on a player at a same time: 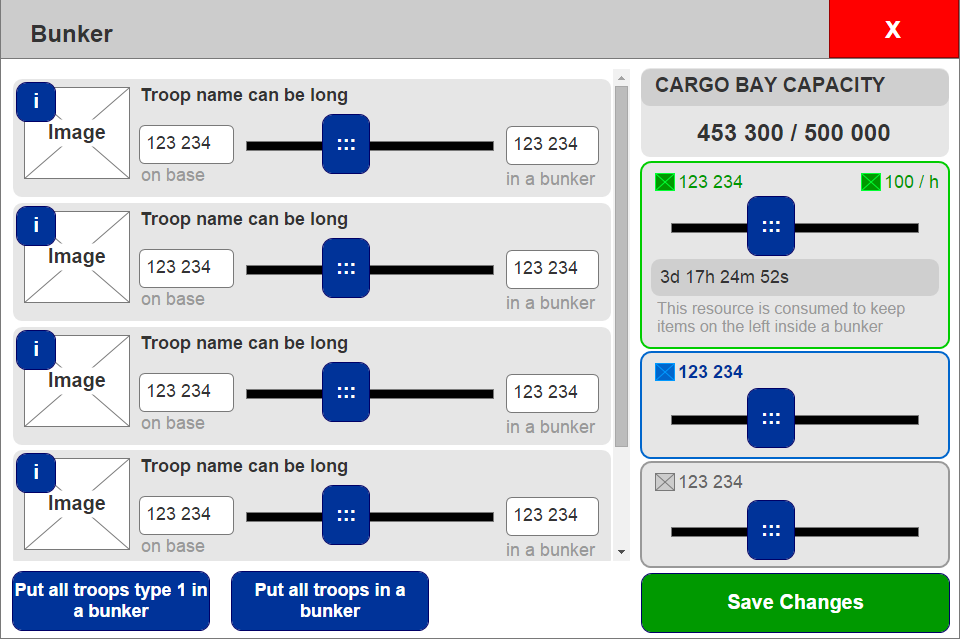 Repeated elements can be clustered with another structure.

Let's say you have: Archers, Spear-man, Swordsman and Catapult

You can first select - a group of unit - decide on the ratio between base/bunker with the amount of resources. If you have visual cue for each group of soldier on your screen; you do not need four sliders at all.

Of course, the new design will require more touch/click rather than current design. However, you can still keep that view for as expert view - or when you have more space for more control. Please be aware of the fact that more than 50 % traffic is now from small screen devices in game industry.

This obviously depends a lot on the game itself. Think of the pace of the game. How fast do players need to locate and use the controls? If speed and skill is part of the gameplay it is better to have the controls designed and positioned to be used often and fast, and not having too much of them.

Sometimes a game’s complexity is the game itself. A strategy game like Civilization has a lot of controls that need to be set thoughtfully, but since it’s a turn based game the time given to the player is endless. In this case you can add controls as much as you want as long as people can still find and use them without problems.

The amount of controls you show in your example look decent to me, but since I haven't played the game I have no idea of how it would affect the gameplay, so my opinion is not much worth.

The only way to know how quick people understand the game mechanics and how well they get along with the controls, is by testing with real players. Start testing early in the design and development process and keep testing on a regular basis, it's the only way to have a good sense of how people will play and like the game.

instead of showing all the controls at the same time you could have a view mode only with justlabels and visuals, when the play selects one of the panels it becomes editable and the controls appear

Not the answer you're looking for? Browse other questions tagged android ios lists games sliders or ask your own question.

4
Visualization of a resource with multiple competitors
2
iPad UI: 2-Player Multi-touch Decisions Affecting Game Play
3
Alerting a player that a game has started in another browser window
2
How to navigate through a type (1 to 5) > a list (1 to many) > a sub page(1 to 10)?
4
Handle Push Notification when app is in foreground
4
Why are most game controllers left handed?
9
Nested tabs on landscape mobile. Best Practice
1
What methods are there to present tactical combat results?
3
Local multiplayer, game menu design (Up to 16 people)
1
mobile game - optimum visual assets sizes