From/To vs. To/From for shuttle app?

At where I work (a university) we have shuttles. Recently, our internal web page was redesigned and shuttle hours are now currently displayed here along with other information. My question relates to the hours and what order they should be displayed.

Is it better to put the campus to city hours first on a desktop, or vice-versa? What about on a mobile device? I've got no UX education, but I feel like campus to city is the best option. Here is a screenshot of it: 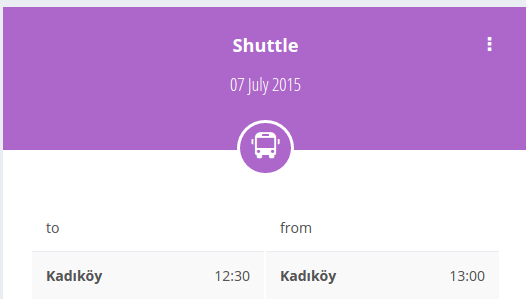 Are you personally based on Campus? I'd consider whether most of the shuttle users live on campus and would be mainly interested in going to the city, or the other way around. You might also want to consider monitoring usage of the system after a few months and changing your approach if the data suggests your initial assumption was wrong.

There are some things that are not 100% clear here.

In the first place, I thought it was a journey FROM a place (on the right) TO another place (on the left) - in this case the change of order was just obvious, because by change it you would achieve more natural representation of the real life scenario (left-to-rigt = start-to-destination).

But it's not the case (although the misunderstanding shows that the concept needs to be polished). The next thought, having read what you wrote, brings another confusion:

I'm not sure about it, but there is not enough information for the user in both cases. In the first case, I would suggest going for "Arrivals" and "Departures" naming, which are obvious and will make user anchor on this being a timetable for a specific stop.

Another confusion users may face is that due to proximity of the entries users may link one to another: "Aha, so this shuttle starts from this stop at 10:30 and arrives at that stop at 13:00." - which may be incorrect. To solve this, you may split it into two views with a selector at the top of the list.

The order by time makes sense here. It's just the labeling that is confusing. A simple change can make it a lot clearer:

If the two cities are always the same you can remove the second:

Not the answer you're looking for? Browse other questions tagged website-design user-expectation or ask your own question.

3
UI design app for programmers.
6
Automatically redirecting to mobile app from home page?
4
Best practice for clearing user input from a kiosk app?
0
What does a vertical bar imply in UX?
1
How to handle content for a new app?
4
Can I combine login and signup with a single button?
0
Best response from calculator for uncomputable expression
1
Merging tenancies in web & teams app
1
Payment method process on App for e-scooters sharing
1
UX Affordance for Distinguishing User-Created from System-Generated Content