What is the term for designing an element such that it visually reflects the spatial design of the object in real life?

What is the term that specifically describes laying out an object or representation of an object such that the interface reflects the spatial orientation of the object in real life?

For example, controls for a stovetop could be laid out horizontally, across the edge of the stove, as would be most convenient from a mechanical perspective. Four burners, with two on each side, controlled by four knobs, two on each side. Like so:

However, there is no quick, visual, or spatial way to know which of the knobs controls which of the burners - is the back-right burner controlled by the right-most knob, or the second-most-right knob? The control panel could instead be designed with offset knobs (either up/down or forward/backward) to convey information innately, like so:

Similarly, information about a networking device (such as a router) could be conveyed via list - for example, which device is plugged into which port.

Or the information could be displayed in a graphical representation, correlating to the layout of the device

What is the term to specifically reference this "laying out with innate information conveyed by spatial layout"?

The natural arrangement for the relations between controls and their movements to the outcome from such action into the world in known as Natural Mapping. 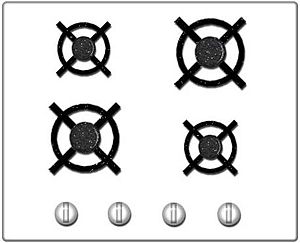 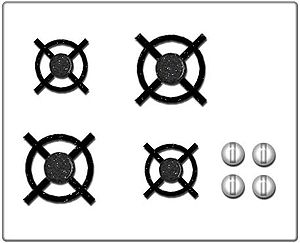 Natural mapping provides users with properly organized controls for which users will immediately understand which control will perform which action (source: Wikipedia).

A quick Google search for "natural mapping" will yield many results. One of the top posts is a book review for Design of Everyday Things on Usability Post. In the review Dmitry Fadeyev discusses Norman's definition of Natural Mapping

To create more effective interfaces we need to exploit what’s known as natural mapping. Norman defines it as follows:

Natural mapping, by which I mean taking advantage of physical analogies and cultural standards, leads to immediate understanding. For example, a designer can use spatial analogy: to move an object up, move the control up. To control an array of lights, arrange the controls in the same pattern as the lights. Some natural mappings are cultural or biological, as in the universal standard that a rising level represents more, a diminishing level, less. Similarly, a louder sound can mean a greater amount. 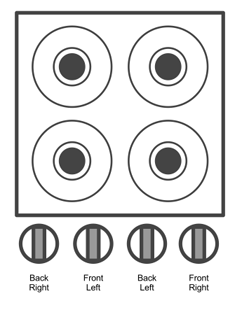 The mappings are not great because the controls don’t represent the alignment of the burners, so you always have to refer to the labels when you want to turn them on or off. We can improve this by using a natural mapping, using a spacial analogy to show the relationship between the controls and the burners they operate: 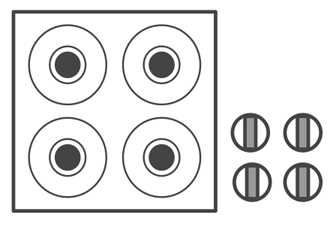 It’s now obvious which control operates which burner because their layout maps directly to the layout of the burners. With such a natural mapping you no longer even need labels. Yes, there is a downside with this example, it takes more space because it doesn’t neatly line up by the side of the burners, but what would you rather have, a more compact tool or something that’s much easier to use?

Not the answer you're looking for? Browse other questions tagged layout terminology or ask your own question.

19
How do you conquer the challenge of designing for large screen real-estate?
4
Is there any special term for the area in site that takes the utmost attention?
3
Is there a term for the "auto search" that Google Instant utilizes?
12
What is the term for the contents of a tab?
14
Term for menu that appears at the top of many webpages
11
What is the term for numeric textboxes with arrows?
4
What is the best way to visually layout an element with 3 or 5 images
3
What is a term used to describe design philosophies that enhance user experience but reduces engagement?
1
Google Maps's route view: What's the correct term for this "string of beads" element?