How to optimise the space used by tags in the right column of StackExchange sites?

In this meta question about what the StackExchange UI site should look like, I'm working on (read: messing around with) a design for the site. I'm using a web-based tool to edit the page's CSS, which is giving me a lot of freedom to change things while limiting me to the available HTML rendered by the server.

While changing and reorganising things (mainly elements like typography and visual weight) I realised that the right hand column as shown on nearly every StackExchange website is pretty inefficient. Here's how it looks on the meta site: 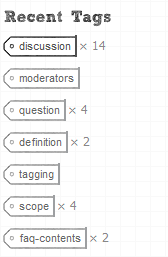 Tags (and below, badges) are small objects greater in length horizontally than vertically. Each one has several attributes:

In my redesign I've taken care to reduce the strength of the tags (haven't tackled badges yet) to reduce that visual noise, but I haven't come up with a good way to represent tags in combination with number of times applied yet. I've had some ideas, but none of them feel right:

Question time: What would be an effective way to redesign the way tags and badges are displayed in the right hand column, given that I'm only able to modify the CSS and can't tamper with the HTML?

Kudos for the effort - very nice!

I have a few comments about the list at the end:

I think that the daunting list of tags on this site makes me avoid as subconsciously it scares me by being so long. I think limiting it to top ten with an option to see all of them would make user scan it quickly and see what it going on within a matter of seconds.

Moreover, making tags look like links would signify that it is clickable and that it will take you to another page.

Maybe use font-size-weighted or font-color approach?

A few ideas, more to spark other out-of-the-box ideas than anything else:

Not the answer you're looking for? Browse other questions tagged lists css overflow stackexchange optimisation or ask your own question.

13
In a grid, how to display long column headers
19
How to indicate a table is missing rows that have been filtered out?
7
How does community volume affect the interface of StackExchange?
6
Alternatives to More Tab Button in a UITabBar?
8
When is a table the proper way to present data?
4
Best way to reorder a list on a web page
8
How to allow users to position newly created items in a sortable item list
1
Best way of displaying table data on ipad - grid vs list
1
Display a group of element containing a varying number of text lines
0
Displaying logos without "guiding" UX