How to ask a user which factors are most important to them when calculating weights in a model?

I'm creating an index related to "walkability". By walkability I mean:

Some users may not care if there are only dirt trails and no sidewalks on a path while other users in a wheelchair can only take the route if there is 100% sidewalks so this metric would be more the most important.

What are some methods for changing the weights assigned to each factor based on user input?

According to User Centered Design, you should ask yourself what are the users' goals.

You gave a very good example of a person in a wheelchair. I would try to find out what are those goals, and let the users filter by them directly. This would spare users having to consider every factor independently, and save a lot of mental work (a.k.a. Don't Make Me Think!). 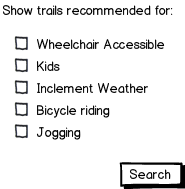 This can be as simple or as rigorous as you want it to be. I would start by card sorting and come up with as many items as can be thought of.

Come up with EVERYTHING you can think of. Ask people. Get "semantic answers."

What we love about the semantic scale is the absence of any prejudgement about the topic in question. In contrast to the Likert, you do not have to take a position on the question to gain an agreement level, you simply ask the respondent for their response without any pre-judgement compared to two different value extremes.

Then, next step, start asking people and find out how relevant the questions are in order to winnow down and identify the most important questions. Maybe only 5 items are necessary; maybe much more; maybe the questions will change based on location (city versus rural) or whatever.

Get these items down. Then start seeing how people rate things and decide between point/star systems or Likert scales: for instance

When walking down this sidewalk I feel

Only show users something they can easily relate to

Think about the scenario of a user wanting to delete a file on their computer. You could show them all the 1's and 0's along with a key of which bits are most or least important on the disk while letting them select the beginning sector and ending sector to erase.

For most people this would be information overload which is why simply showing a recycle bin is a great abstraction. Users quickly learn that dragging a file to the recycle bin makes it go away leaving more free space for other files.

You should also try and abstract away as much information as you can about walkability. People can relate to sidewalks, dirt trails, gravel roads, etc. so maybe you can simply tell them how much of each is between the start and end points allowing them to tweak the thresholds like so...

By allowing a user to set certain criteria to "none" your algorithm can adjust accordingly to only show results that line up to what is important to the user.

Looking at the way you've posed this bit of the question...

Some users may not care if there are only dirt trails and no sidewalks on a path while other users in a wheelchair can only take the route if there is 100% sidewalks so this metric would be more the most important.

...I get the impression that what you need isn't so much a way for users to see what everybody in the world thinks about the "walk-ability" (traverse-ability?) of a route, but a way for them to see what people who understand their situation think about the walkability.

After all, somebody on crutches or with a walking frame is very likely to have quite a different idea of walkability to somebody on a mobility scooter, somebody who has balance issues and needs to stop often or somebody able-bodied but who has to use a stoma-bag when they're out and about (so may need to stop and deal with it with very short notice). Their concerns are just different.

So how about we turn the question on it's side and look at it from that direction instead, and look at a way to match user concerns and then aggregate a walkability score only from closely matching people.

It'd be worth having the ability to fill in specific details as well, but social proof like this works best when the user knows that the people who's opinions they're seeing have concerns that are close to their own.

3
When user testing, how important are representative users?
17
How valuable are user journeys?
3
Which legal documents are required in user research?
3
UX without user research: How do I implement good UX principles when my resources are limited?
1
How to do User Research when interviews are impossible?
5
Should we ask users to play a role when performing user testing?
2
How to perform user interviews for a new product when there are IP restrictions
0
What is the difference in ROI, KPIs, OKRs metrics? how and when to get them?
2
User stories—how do I validate them with actual research?
3
What is the most user-friendly way to ask a 'yes' or 'no' question via e-mail?