In this roundabout design, arrows(?) point against the flow of traffic (traffic flows along on the right side of the road).

You can particularly see it in the second image.

They indicate that you have to look out / ahead, like a yield sign. (A stopping line, but where you don't stop unless there is a need)

So they implicitly indicate that attention in needed as you progress. My first thought when seeing them, from a UX standpoint, was that they would indicated motion in a direction (it's an arrow).

Yet, that would not indicate flow in the correct direction. Then, the small arrowheads 'without serifs' did not support the idea that users would only read them as directional indicators. Then there is the grouping of them in the lane..

The reality, that they indicated a kind of flow against the direction of traffic, could still remain present in how they are 'non-standard' arrows.

Can anyone give a clear description of the mechanism by which these have their implicit meaning? 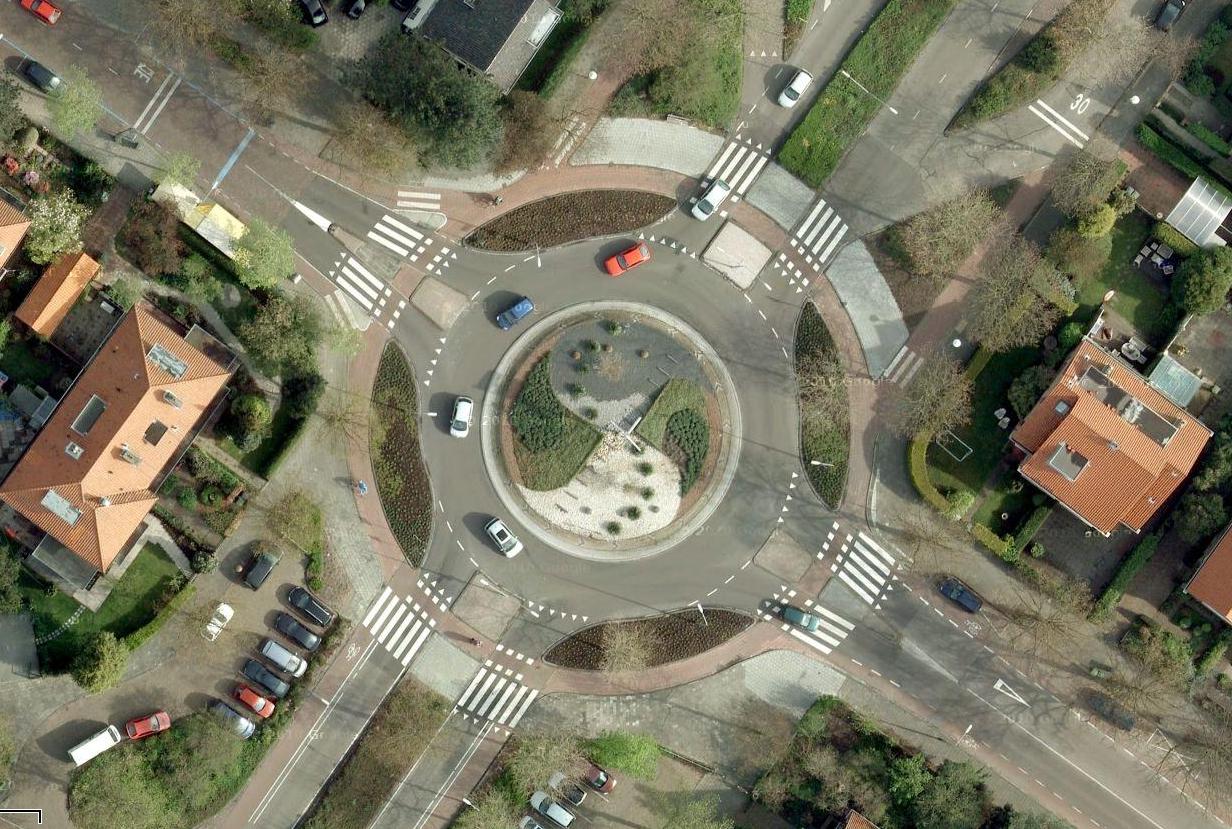 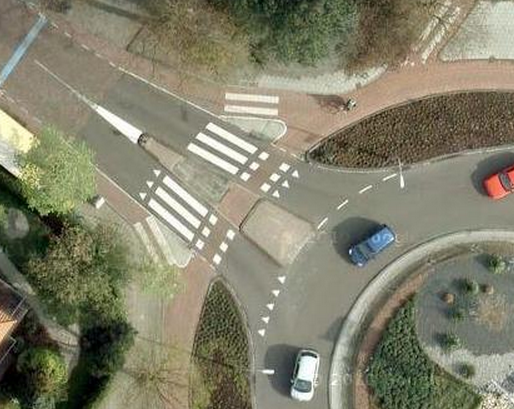 The "shark-tooth" yield lines are not arrows that point you in a direction. They are a line of yield signs - also known as a yield line. In Europe this is a standard and all drivers are familiar with this. 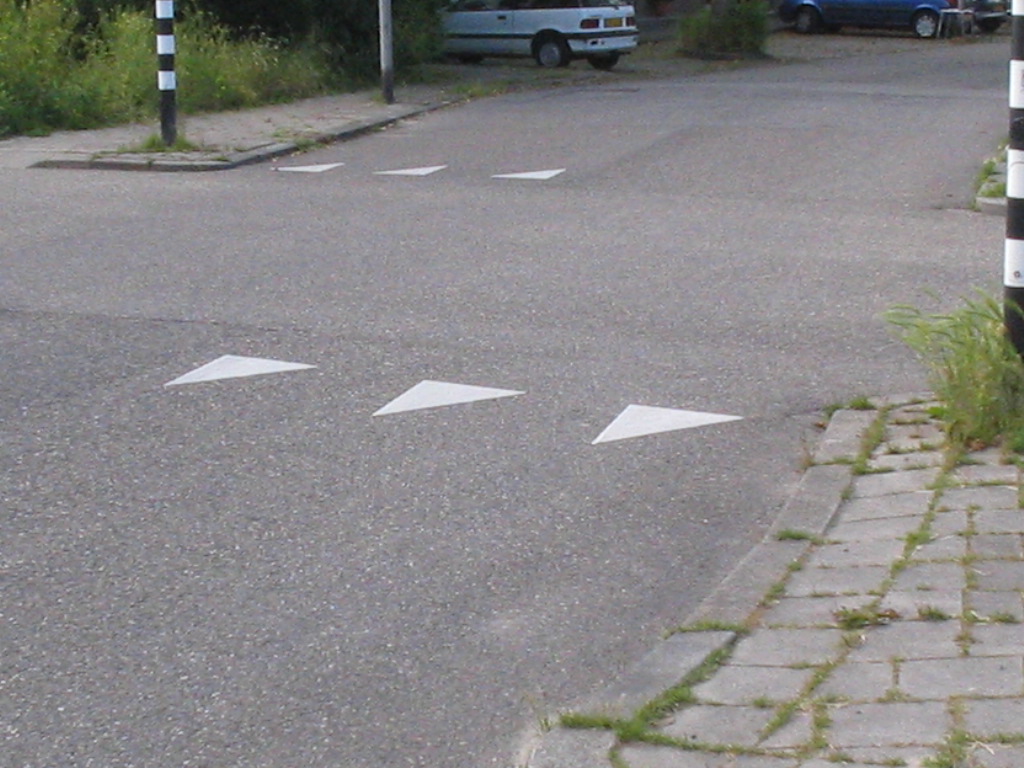 Here is what goes through my mind when I see those shark teeth on the road...

Am I going the wrong way? Is this against the flow of traffic? Will those things pop my tires?

In any case, driving into arrows that are pointing at you is jarring and can make you think twice and proceed with caution.

That is exactly the goal here to make drivers more alert so they don't mindlessly run into a person or a car... 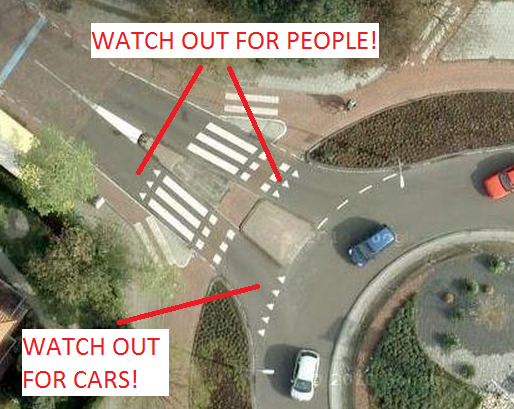 Sometimes bad design is just what it seems

The triangular yield indicators here are called yield lines (see Wikipedia, DOT specifications and this article on when and how they can be used) and their appearance in a single-car lane is probably the result of bad design.

They are intended to mark a position on the road where drivers should yield to other traffic (e.g. pedestrian or other vehicles). For example, the US Department of Transportation specifies:

If used, yield lines shall consist of a row of solid white isosceles triangles pointing toward approaching vehicles extending across approach lanes to indicate the point at which the yield is intended or required to be made.

In theory, the inverted triangles for the yield line are meant to mimic the traffic yield sign:

...unfortunately yield lines are too cryptic to be understandable to many drivers, that is, they communicate their intent very poorly.

...would be to place a clear, large marker in the lane:

It's a cultural difference for a stop sign, in Europe and many countries in Asia and South America (and for what I saw, some parts of Noth America), it's a clear reference and everybody knows what it means.

From a significance meaning, it's supposed to be a path that opens to give way (in Europe is popularly known as "a knife that will damage your tires" sometimes known as a Shark Teeth) and it's usually seen before a pedestrian crossing line, although it can be used in secondary roads.

This significance can be easily viewed in the sand sign version evolution, going from this: 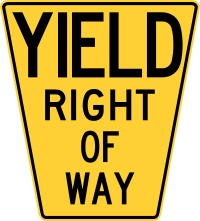 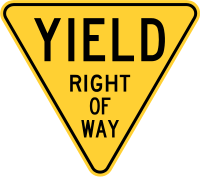 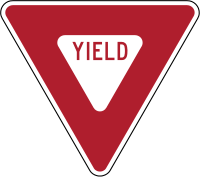 Keep in mind the sign painted on the road (or lane marking) should not be used alone, but complemented with regular signs (like the ones above), light signs (flashing yellow light) or gradual messages on the lane as you approach the crossroad

If you're interested in Traffic Signs Design, take a look to this PDF about the use of Shark Teeth's on roundabouts and the MUTCD application (specifically page 35)

I believe that the implicitness comes from the assumption that you know you're on the correct lane while entering the roundabout.

Then, when exiting, the correct lane is suggested by the shape of the junction, so at that point, you shouldn't even see those signs.

Not the answer you're looking for? Browse other questions tagged physical signs safety or ask your own question.

3
What is the psychology behind road markings on lanes unaffected by speed cameras?
2
What research exists into user experience design factors for the design of ovens and cooktops?