Should voting buttons on SE float down when scrolling?

SE is A/B testing a new solution where the voting buttons on an answer remain visible as you scroll down.

(I apologize for the running gif, it's super annoying, but it does the job).

Apparently the goal of this change is to increase voting, as the original post mentions that the acceptance criterion for the test is a 5% increase in votes.

The feedback so far is mixed, some people love it, others hate it.

From a UX standpoint, what could be the pros and cons of this?

It's a good idea, but it needs some implementation tweaking I think

Once the panel becomes sticky while scrolling, it visually detaches from that anchor so it's important to maintain visual-semantic relationship between the console and the answer.

Having control buttons in a fixed position is something quite common on today's web experience. You see the top navigation bar fixed at the top of a lot of news paper site and e-commerce sites. More annoying for some users (who don't use an AdBlock tool), is the fact that advertisement banners, usually on the right side of the page and not inline with content in some cases is fixed to the top while scrolling.

What is new here is that the buttons also fixes at the top of the page while scrolling downward in the same answer. These are inline controls and apart from sticky ads I think the experience from users will be positive, once you get used to it. It fix the problem scrolling back up to vote, and would probably improve the number of votes.

The con is that we are no longer looking at content in fixed position. This is especially true when asynchronous loading of pages mess up the current viewport and move what you're reading away. But the implementation here, doesn't do that cruel design choice. And we have been moving away from fixed pages since the introduction of scripted pages in the middle of the 1990s. This is another invention in that direction.

So from a UX perspective I believe it's a good thing where pros outrank cons.

I don't particularly like it. And the reason has to do with the visual separation of questions on a page. In short, the voting buttons are presently the most distinguishing feature identifying the top of a question and act as a very intuitive visual separator between questions. I found that when the voting buttons scrolled with the top of the window, I got confused trying to quickly navigate between questions because my first reaction felt like the questions themselves were moving around on the page.

The moving buttons add a whole new dimension of visual confusion that the brain has to process. It's an unnatural behavior the user has to be conscious of. That is, you simply have to be conscious and aware that the voting buttons are moving as you scroll or you will get confused very quickly while navigating.

Furthermore, by anchoring the voting buttons to the top of the window, the buttons for the current question will remain in roughly the same place on the screen the entire time (only to change briefly as a new question is scrolled in). This also makes it much less obvious when you've scrolled into a new question, unless you happen to be closely watching the voting buttons the whole time.

The human brain is very good at spatial visualization. By keeping with the "page" metaphor, where things are fixed on a single scrolling plane, the brain can visualize (to a degree) the entire document above and below the viewport as you scroll. But when the document changes as you move it, that impedes the natural spatial association of the document as a whole.

Just observe the animated GIF. It becomes very difficult to visualize the entire page as it scrolls, and to effortlessly discern the boundaries between questions.

I would argue that if the designers really want to do things this way, that more is needed than the current trial implementation. In particular, the voting buttons need to be conceptually separated from the post body (perhaps by having a darker background color in that column), and there needs to be some improvement made to the visual separation of questions.

For example, even something as simple as this could have a huge impact on the readability of the page with floating vote buttons: 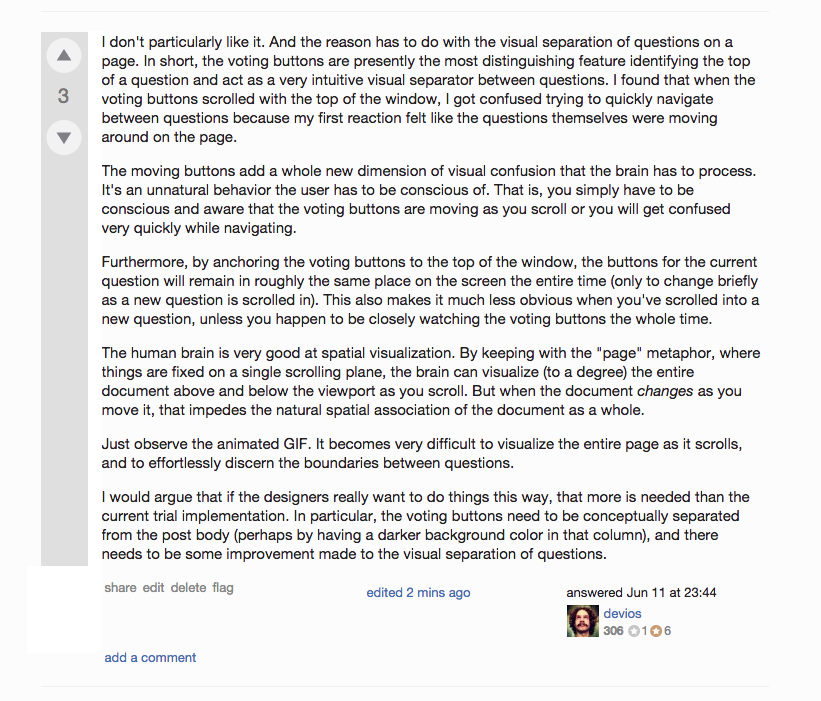 In short, the solution is to make the voting buttons less visually dominant. But being less dominant doesn't mean less obvious mind you. They're still obvious, but because they are contained in a visually dominating rectangle, the brain can tie that dominant rectangle to the page, and movement within that rectangle is not as distracting to the scrolling as a whole.

Personally I think it's a good idea although currently ther doesn't look to be much distinction between a question and an answer, which means the user could confused as to what they are seeing on the left hand side, maybe it needs better labelling or hierarchy applied?

Also in the case of a long answer versus a short answer, it doesn't hang around long on a shorter question, which makes sense technically but may confuse some users.

Not the answer you're looking for? Browse other questions tagged user-behavior layout voting or ask your own question.

4
In a site that offers a voting system, should there be extra criteria to "down vote"?
0
Where to place voting buttons on posts?
2
Should a limited number of votes be represented with buttons or tokens?
9
What design principles and/or guidelines we should use for vote-up/vote-down and counters?
5
Why have two mouse buttons when one is sufficient?
2
Use of color for YouTube voting buttons
0
Should I try to standardize the location of help buttons?
2
When voting, should the positive option be on the left or the right?
3
Should regular Sign In/Create account buttons be before or after SNS buttons
0
Should you save the state in a page with infinite scrolling?