Imported records - how to notify users?

I have the following question: we are developing an enterprise application. One of the main views which exists in the app is a typical table of records. Users can sort the table, filter the table, do quick or advanced searches etc. Users can also click on any row in the table in order to drill down & see more details.

Now we need to add a feature where users will be able to import records from external files. We are wondering what would be the best way to notify end users that the record has been imported / created in the system? We can think of two ways at the moment:

I am quite certain there are some web apps which take this approach, but am not able to find any at the moment. Would appreciate if you could point me to them.

Which option would be better from UX perspective? Option 1, 2 or maybe a combination of the two?

Thanks as always for your help.

interaction-design refresh
Share
Improve this question
asked May 25 '15 at 12:59

This is a common problem with a list view that is filtered/sorted/paginated (see this answer for a diagram).

In general, any records added to such list (and in some cases even records modified) will require data reload. If you wish to focus users on the new set of records, there is also an issue that the previous view settings will be lost although these might still be important for the user.

So whichever way you do it, there will be some possible issue showing these new records on the existing list view.

Sometimes, solutions like 2 make sense - if no other use case suffers from the list view data being changed after an add action.

But the solution you gave as 1 - showing these records in a separate place is less likely to work better, all use cases taken into account.

I would like to combine both with an option and more control to user to switch between updated and his original view where he was browsing....

See my visual solutions below 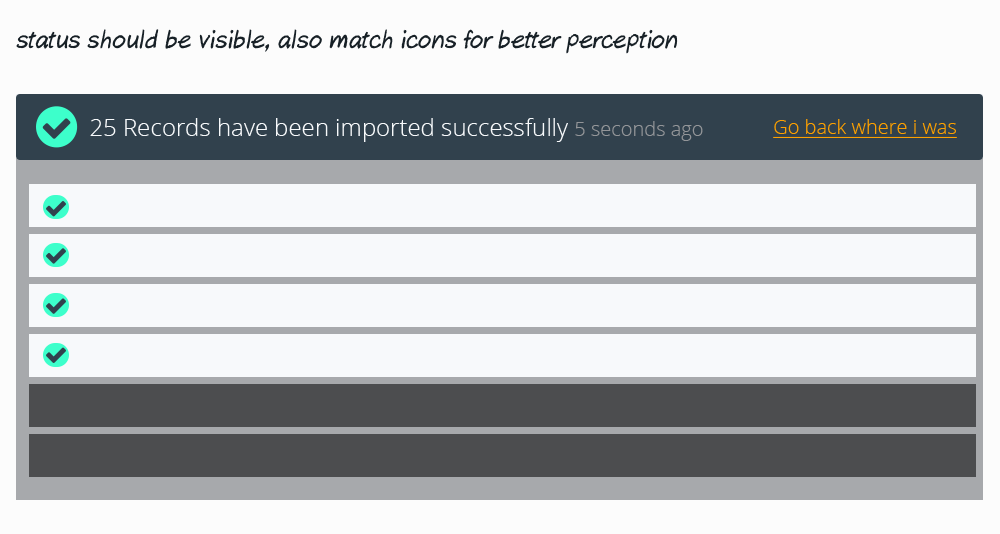 I would suggest animating the tick icon after completion to get user attention... 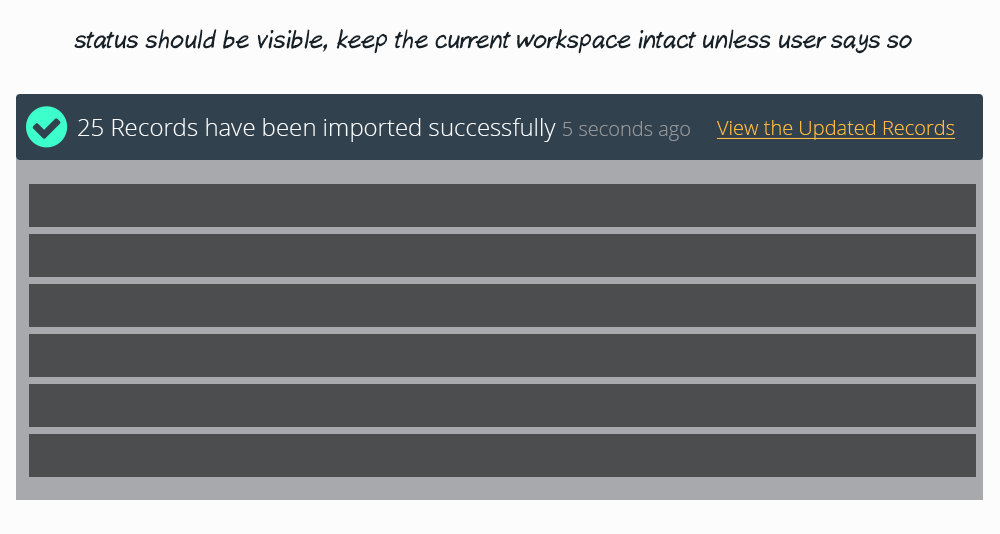 I hope it solves your problem

Not the answer you're looking for? Browse other questions tagged interaction-design refresh or ask your own question.

4
How to display a distinction between actions which affect the 'real world' vs. actions that affect only the information in the application?
9
Design pattern for merging duplicate contacts?
5
Regards to Records in a Table: Long Scrolling versus 1 > 2 > 3
1
TriState treeview with checkboxes
0
How to visualize results of user actions after creating a new record?
3
Manual / Auto Refresh and users' selection
1
What to do if the requirements for an action are suddenly not met anymore?
0
Best way to organize process of adding child records to a parent record from a UX perspective
3
Form behavior when "clicking off" to close a dialog
1
Data table entry: creation vs editing - how to design workflows for least friction and effort