Designing a popup notice for a game

To put this question in context, this is for a (mouse-driven) ui-heavy game. During this game many popup windows will appear. They are mostly non-interactive, just displaying updates on various processes, and can be closed by users.

Some of these popups will "expire" quickly, and I want them to automatically close when this happens, after a delay of say 3-5 seconds, unless a user interrupts them (in which case the user can is free to read them until they decide to manually close the popup)

What would be the most intuitive way of communicating to a user that a dialog is about to close, and offer them a way to abort this process, while being understandable in just a few seconds?

I'm thinking maybe an animated progress bar (labeled "closing...") with a cancel button (or maybe it should say "pause"?) next to it. But this might be a bit big and clunky?

I had initially thought to show a circular loading indicator around the popups close widget, and when it completes full circle the popup would close. But realised this doesn't communicate to the user at all how to abort the countdown. In fact clicking the only thing animating (the close button) actually results in speeding up the process. This is the opposite of the interaction I am trying to offer to the user.

Do we have any examples in the wild of interfaces which do this?

What do you think is the most intuitive way of accomplishing this?

Gaming popups have some different constraints

I prefer #1 for a number of reasons, but you can choose the interaction that best suits you.

There are some variables that you could take into account here to express time:

Maybe you don't need to use all that variables, but I made a mockup with all of them to get the idea.
BTW "wait" and "close" are the first words that came to my mind, but since I'm not a native English speaker, you should evaluate what would be the best word choice in your context. (you you also use keep + resume/ X / dismiss for example). 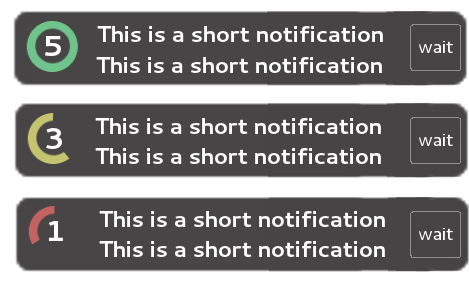 And after clicking wait (you have million ways of differentiating the "pinned" notifications if you want):

You should also switch the positions of the timer, text and button according to your application and how much attention you want to give to each part.

A simplified approach can be as follows 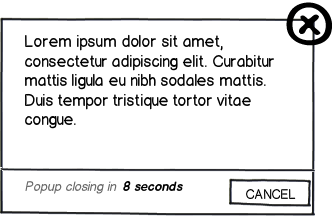 This would show the user how much time is there for the popup to close and also enable him to prevent it from closing as well. The close icon on the top right enables him to dismiss even before the timer runs out as well.

This said, I am concerned that 3-5 seconds might too short for people to react in time to be able to extend the time read it. Also quoting the section 508 accessiblity guidelines

When a timed response is required, the user shall be alerted and given sufficient time to indicate more time is required.

Hence if its critical information, consider a longer time to show it.

Not the answer you're looking for? Browse other questions tagged usability gui-design notification popup games or ask your own question.

28
UX for Game Development?
11
Given CSRF protection, how can I deal with an extremely slow user?
0
Intuitive way to present chained 1-N relationships
3
Is there an elegant way of sharing content that's already in a lightbox?
3
Alerting a player that a game has started in another browser window
4
Handle Push Notification when app is in foreground
3
Controls in the bottom bar of a modal popup vs. user's expectations
0
Notification messages in game UI
3
Advice/resources asked for designing a sort of “tasks to complete” layout
0
Why use a descriptive phrase rather than an X to close a pop-up?