Left-align or right-align a Call to Action button?

We are creating online presentation, and most of the text on the pages is centred, on the last page we have CTA, the button leads to a different website, that is aligned to the left. I was asked to align it to the right, as some believe that CTA's belong on the right hand side and while being centred it seems to be getting lost (it's a big green button).

I have read Lukew's article about "Primary & Secondary Actions in Web Forms" But this is seen as a great example of buttons on the web form, is there some study that looks at the eye flow from centred text and images to a button, does the western eye prefers. Looking at the diagram with arrows I would thing that right align button would actually be preferable as it takes for an eye to get to the button faster.

You'll find a lot of info out there about CTA tests and theories. But you're not going to find a whole lot that tells you what to do with horizontal alignment. The reason is, it depends on your design.

If your colleagues want to talk about what is more common, then you should align right, as you suggest. This is used more often than left because it denotes moving forward in a sequence (at least for us left-to-righters). Conversely, you'll find a lot of "< Back to something" CTAs aligned left.

In your case, the site content is mostly centered, which trains the user to move along the central vertical axis. It also creates an aesthetic environment that favors symmetry. In that context, I would center align the button. For the visually minded, here's a quick wireframe of following the dominant axis of alignment. 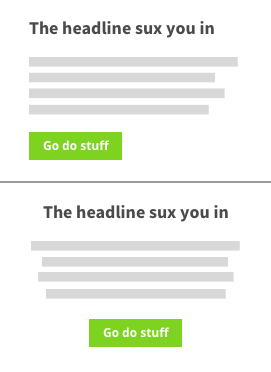 If you're having trouble with users missing a centered button, you have to ask yourself if you've given it proper scale, spacing, and differentiation from the surrounding view. As I'm sure you know, alignment is not the only factor in play.

More importantly, do you know for certain that it's being missed? Sometimes a lack of clicks is not for lack of visibility. Do users know what to expect when they click? Have you given them adequate motivation?

Not that it means much, but here's confirmation that centered can work from Smashing Mag.

Locating a call to action button in the middle of a web layout with no (or significantly smaller and deemphasized) flanking elements can be an effective way of drawing attention and enticing an action.

Why does this matter?

This framework also helps you make a decision on left vs right alignment if you do decide to go with alignment dissonance. Left alignment is a more natural choice as it's enough to break the center-alignment while still conforming to the user's expectation of left-to-right reading. That's why it is more commonly seen on websites.

Right-alignment may stimulate more cognitive dissonance (user expects to go down-and-left to read the next piece of content, but instead just goes down or down-and-right), but comes at the cost of some potential disorientation as a result.

What will the CTA be doing? Depending on what pressing the button will do will likely lead to a different placement. Such as, if it's leading to another page it can be meaningful to place on the right for a desktop design as most desktop OSs use next/ok buttons on the bottom right.

One could argue a neutral centre position can work in most cases.

the time required to rapidly move to a target area is a function of the ratio between the distance to the target and the width of the target.

You can also consider the Gutenberg's Diagram, but according to research study by Nielsen, this terminal zone concept isn't really that useful, although in my personal experience it works as long as the elements are short.

However, if you place your form on the middle, then button should be centered or right aligned (and here's where Fitt Law's is useful, hence why I mentioned it, do the maths and you'll see). Remember it will also depend on your form's width. Personally, I tend to do smaller forms (no more than 400px width) and use really bulk buttons, usually taking the whole width of the form. I did a lot of research on this, and it works, but of course, you have to do your own testing.

Finally: besides placement, remember to use copy, spacing (leave room for the button!), size and color.

Not the answer you're looking for? Browse other questions tagged layout call-to-action perception alignment perceived-affordance or ask your own question.