Do you think that it is a wrong decision to use a textarea for “add comments”?

Do you think it is a wrong decision to use a textarea for the "add comments" feature?

Here are a two examples that contradict your text input == enter and textarea == not enter theory:

Meebo uses a textarea, but has no send button. The only way to send a message is to hit enter. Since Meebo's design emulates a desktop instant messaging program, people expect the sending mechanism to follow the convention - hitting enter. IM applications require fast communication. Hitting enter is much faster than pointing at a submit button and clicking it. 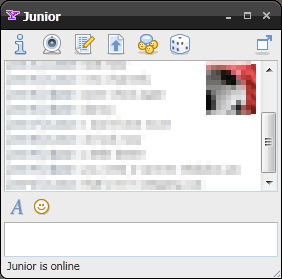 Facebook uses a 1-line text input, but doesn't require hitting enter to send the message. You can hit the reply button to send the message. The enter key sending mechanism can be turned on or off by using the checkbox next to the enter key icon. Some people may choose to turn off the enter-send because either the want the enter key to insert a line break or they don't want to accidentally send out an unrevised message. As these are personal messages to close friends, you don't want an inadvertent enter key to send out an unfinished message that could change the relationship.

I think that you should make the post button be directly after the textarea (or change the tabindex) so that the user can press Tab+Enter to post their message, like Gmail's compose form. You should also give visual notification that this is possible.

For example, in HTML:

Not the answer you're looking for? Browse other questions tagged forms input comments or ask your own question.

22
Enter to submit comments on Facebook and StackExchange
19
Credit Card input format
2
lightbox (modal box) VS Inline Editing for a profile screen
1
Comments at the heart of a document
0
Is the return arrow a recognized symbol for submitting an input field?
2
Is there any use case (except submitting a blurred input) when you can't do without visible SUBMIT button for a form?
4
Should my Task Modal comments be threaded for reply comments or single inline ordered by DateTime?
2
Is it a good practices if I give helpful information about operating the search box to user?
3
How to inform the user a textfield has both a character and a line limit?
2
Adding Users to a list