Should buttons be illuminated, or darkened, upon hover? [duplicate]

To most, this question might feel subjective... but there's really more than just opinion involved here.

If you hover your hand over something in real life, most times a subtle shadow will appear above the object. Mimicking that same idea in the form of user-interface / experience could be more intuitive or natural... or not if the user perceives technology as something totally separate from real life.

An example of the two: http://jsfiddle.net/ganoucgk/

So again, what is more intuitive to the user, a button that is illuminated upon hover, or darkened upon hover? And why?

As some of the comments have already discussed, it's more important that there is consistency throughout the application for all buttons. The user's response will come from a change in hue regardless of whether you choose to illuminate the button or shade it.

To answer your direct question: For the reasons above, I don't believe that either way is inherently better from a generic standpoint, and the choice to shade vs. illuminate is more dependent on the specific UI of your application.

You make a great point about the physical metaphor to a shadow cast over a button, but many interfaces have standardized a depressed button appearance to be a darker button with a small shadow cast by the button's "container". 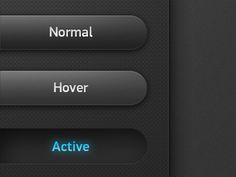 A dark hover state that transitions to a dark depressed button state would not communicate the difference in these states as well as a light hover state would. While the container shadow would help differentiate, its subtlety can be easily overlooked.

Also, whichever option your UI uses, make sure it is consistent. Any change in appearance will suggest a change in behavior that will lead to confusion.

Not the answer you're looking for? Browse other questions tagged buttons interface color or ask your own question.

99
Should a button become lighter or darker on hover?

2
Coloring Buttons
2
Best way to communicate the action of a non-button control
11
Replace radio-input with “buttons”? (web forms)
6
Improving a 'page layout' editor's user interface
6
showing buttons on hover?
6
Is UX design subject to disruptive innovations?
13
What's the purpose of the bottom bar in popups / modal windows?
23
Material design - buttons raise, not depress
3
Advice/resources asked for designing a sort of “tasks to complete” layout
10
Counter in a corner of a button