How would replacing the spacebar with a track pad affect user experience upon typing?

Google have issued a patent aiming to replace the spacebar with a track pad sliding in its place. This would make room for smaller keyboards and smaller devices, but what does it do to user experience. Could users type with the same speed and accuracy when the spacebar is replaced with a track pad (touch control)? 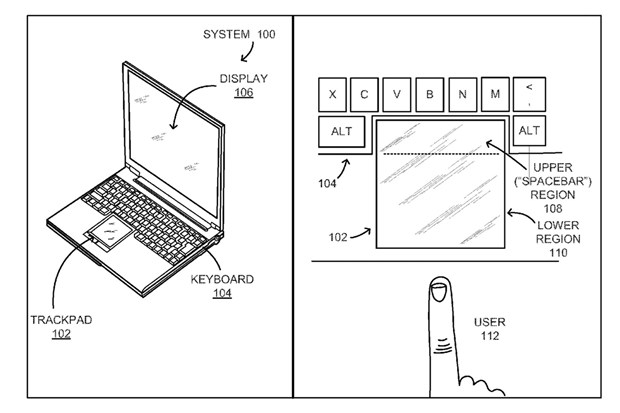 Reference: Google may be Planning to Kill the Spacebar

The Google design introduces three problems to a mechanical keyboard:

I can see a couple of potential issues that would be worth testing and I am sure that a company such as Google will test it thoroughly:

Obviously the definitive answer would come from building such a keyboard and doing suitable tests. I don't believe that comparisons between conventional keyboards and either touchscreen or Surface-type touch keyboards are necessarily instructive here, for two reasons:

Qualitatively, though, I imagine it to feel unsatisfying, or at least take some getting used to-- if you think of typing as playing a percussive instrument, it's a very different drum kit. You only have to listen to someone typing to hear how they use a satisfying whack on the spacebar to celebrate a word well typed...

Not the answer you're looking for? Browse other questions tagged user-behavior touch-screen keyboard space-bar or ask your own question.

10
Is it user-friendly to ask the user their religion upon registration?
5
How does a "visitor counter" on a web site affect user experience?
5
How does a CCTLD affect user behavior?
5
How do Notifications affect User Behavior?
1
How to take input from the user on which product to track?
4
What would be a better typing experience in landscape mode of a keyboard?
0
How to improve the user experience of sending material through courier
8
How would you ask the user if their drawn signature is similar to the ID card sign?