How to display errors with single LED?

I am working on a tiny hardware device which has a single LED that can be used to display errors (there are no other outputs). Actually it is a tri-color LED but the red color is dedicated to errors. Hopefully that is user-friendly.

The question is: there are many possible kinds of errors, how to indicate what kind has occurred, and what to do about it? Ideally this should be obvious without reading the manual, based on similarity to other small gadgets/cellphones/etc. At least it should be memorable enough that it would only require flipping through the manual briefly once.

The most common error is that the battery is almost-dead and the device needs to be recharged before being used. This error would be communicated whenever you try to use the device.

There are other (rare) errors which should prevent the device from being used without factory service. It should be clear to the user that this is a permanent/non-user-fixable situation, and they need to call support; and maybe indicate the detailed kind of error in this case (let's say there are ~15-20 possible kinds) in a way that is readily described over the phone so that we can get some information about failures from support calls.

Note: the device has a tri-color LED (all colors independently dimmable and blinkable) and three buttons; that's it as far as available UI :)

Many computers use beep codes when they start up, as at that point, all that is available is the system board -- there may not even be a display unit.

A similar system could be used with blinking the LED in groups of flashes; use one flash per second for the most common (low battery), then a group of two flashes with a distinct gap between groups, and so on.

You may need to do some research into the largest number of flashes in a group which can be comfortably counted. It's probably five.

In an unrecoverable error condition, a press on a button might cause a sequence of coloured flashes, say a number of yellow followed by a number of green followed by a number of red. This would allow a detailed error code to be indicated. With three colours and a maximum of five flashes and a minimum of one (to keep the group and colour-sequence intact), you have 65 possible codes. Even red/green colourblind users will be able to distinguish the different sequences, but you may need to do some research to determine which colour is likely to look brightest.

Well personally, I think usability-wise, LEDs are among the worst to inform your users of a particular error.

Now to deal with that problem in the best possible manner. You have 3 clearly distinct modes (actually 4, 'off') to distinguish errors:

There are some in between (i.e. a slower phasing, alternating light) but those are less obvious and definitely not as memorable.

In my opinion you should set it like this:

To elaborate on the 'solid' state, if you want to actually be able to differentiate the range of errors you could interrupt the solid state by blinking an x number of times. Of course, these have be documented in the manual.

Very restrictive scenario, but if you're going to persist with such an interface the manual will need to clearly show the relating codes.

I would suggest two groups of flashes as such, with a maximum of 5 flashes per group, you can [almost] easily display 20+ errors.

I don't think I've made too many errors here, but you could tap out the codes to ensure they are recognisable. 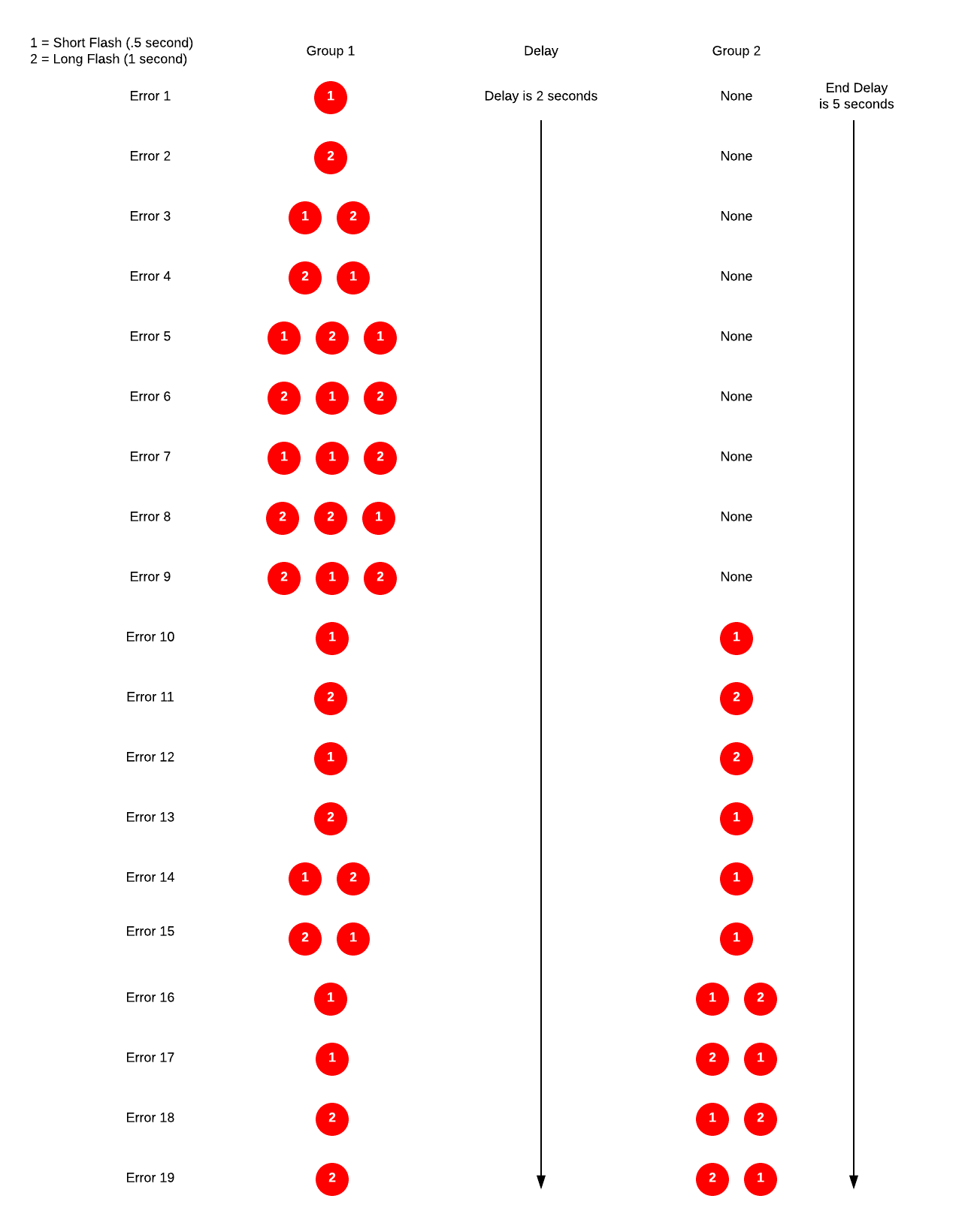 The difficulty is that you're trying to portray 2-dimensional information (type of error against the time it happens) using a single dimension (light on/off over time). As others have pointed out, if possible, find another way. WiFi and a web interface is probably a good one.

If you must use a single LED for multiple errors, I would suggest as follows:

I would avoid an always on, because it'll be ambiguous: does on mean there's a problem, or everything's ok?

None of the answers used "dim" information. My suggestion:

Low battery - slowly dim in and out. Represents "sluggish performance" due to weak battery.

Suport call - combine long/short/space blinks (like Darryl suggests) but only after some special button press (when asked by support person) for example long press of two or all three buttons.

You have basically three types of errors :

The most common are the 2 firsts, the third part is well covered in other answers so I will let you refer to them.

You have 3 LEDs, let say they are green, orange and red.

A signal with the three appearing in loop (green->orange->red...) can be a low battery signal. It is easily memorized because of the battery convention : red for full, orange for low and red for critical.

Since all solutions recommend flashing led, a red led not flashing could be a connection issue.

Not the answer you're looking for? Browse other questions tagged error-message wearables or ask your own question.

7
How to display login/register errors?
38
Is the color red really appropriate for form validation errors?
8
Should I show the Bank name as a user enters a routing number?
2
How do you process the errors in your applications?
4
Error handling - what to do with large error list?
1
Alternative to modal error messages with only one button
9
“An unexpected error occured”
1
How to illustrate a “saved, but incomplete” state
1
User dialog - How to state clearly username isn't found, and unable to connect to server?
0
Display form errors on small screen. Scroll to error vs errors by submit button