Should a device charger provide a visual indication that it is charging?

I just bought my brother an iPad and noticed there isn’t any visual indication on the charger when it's in an active charging state.

Why wouldn’t a designer provide some visual feedback? Many chargers in industry have a light. Is there some advantage with this no-feedback approach?

This is the charger in question: 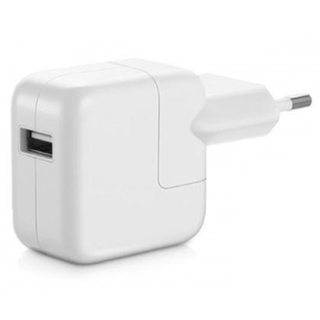 A charger has at least the following states, and possibly more:

It's difficult to communicate states using just one LED: 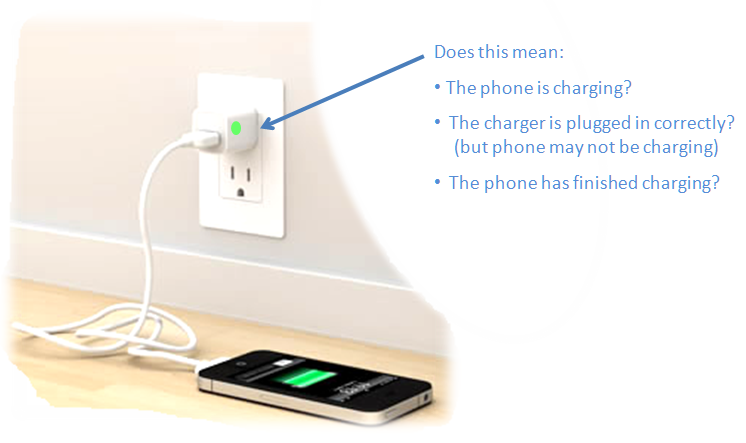 A decision not to include an indicator on the charger can be the result of thoughtful design which incorporates these considerations. By examining the UX goals here, one might posit:

The phone-based indicator is not perfect. If the phone battery is totally dead, there is no indicator at all since there is no power to the screen (that's one of the reasons phones try to switch themselves off with a tiny reserve amount of power rather than run to zero). If there is a problem with the cable, or charger, or wall power, there is no additional indicator to help users debug what might be wrong.

But rather than cater to these less frequent cases, designers correctly have focused on the majority use case, which then allows them to design chargers which are:

There are certainly reasons why one should provide visual indications (it provides more information to the user, one should provide feedback on BOTH the charger and the device), but a reasoned compound design tradeoff here has empirically resulted in chargers which favor simplicity and phone-based rather than charger-based design.

In my opinion, it depends on the device you are charging.

Because on an iPhone/iPad/iPod touch (and on most devices of that kind) there is feedback whether the screen is turned on or not.

The new MacBook takes a different approach: even if the computer is in sleep mode, there is a noise and the screen turns on for a second to show you the battery remaining.

One may reasonably assume that users are looking to the device being charged to see if charging is happening versus looking to the charger. It's therefore likely, since there is no feedback mechanism in the charger design, that the product designers validated that assumption and found that having such a mechanism would be redundant, not intuitive to the end user, and thus not worth the cost of adding it to the product. (Based on Apple's previous hardware designs, they seem to favor only adding what is absolutely necessary to their hardware.)

I personally, hate it when things have lights on them, especially if they're things that I could potentially be running at night while I'm trying to sleep- chargers, speakers, computers, anything really.

Bright little LED's are never a selling point for me when I am looking at something's design.

Most of these things are able to provide feedback in other ways- phones you can check the screen, speakers make noise, computers can be used. The only purpose the light holds is to be a nuisance.

I had an experience recently at an airport that had me asking the same question. I was plugged in but nothing was coming — none of the other folks at my little power pod had noticed that their devices weren't charging. I was sure a light on the charger was the answer.

I think, though that this use case — the use case that the light would be designed for — is a very narrow use case. Specifically, the light is useful when you've plugged in the charger but there's no power. The percentage of times I plug something in and there's no power to the outlet is minuscule (though admittedly frustrating when it happens). If we lived in a time of inconsistent power in our spaces then I think this would happen a lot more and you'd get a lot more utility out of a light.

Thumbs up would back on Kickstarter :)

Not the answer you're looking for? Browse other questions tagged usability indicator hardware application-state or ask your own question.