Why do we say that door knobs afford twisting?

So many basic discussions of affordances begin with the example of door knobs affording twisting. It seems to be the second example used in Norman's 1988 definition, even.

However a symmetric round non-knurled door knob gives absolutely no obvious clue for rotation or reason to explore rotating it, or even to push it. I think a door knob only affords a better grip for holding and pulling.

One explanation for why I feel this way could be because I grew up in India where I first saw similar tiny wooden 'knobs' used on old wooden cupboards, and these were simple lathe-turned wooden knobs with no rotating components. Doors typically had handles instead.

Is the twisting affordance attributed to doorknobs some other cultural phenomenon instead? If so what would one call it?

Edit: Some examples of door knobs being attributed turning/twisting affordances

“Affordance” is one of those terms that has come to be used for so many different things that I’ve recently just about given up using it in order to avoid confusion.

In the original definition put forth by Donald Norman (1988) in The Design of Everyday Things:

The term affordance refers to the perceived and actual properties of a thing… that determine just how the thing could possibly be used (p9).

Note the use of the word “possibly.” Affordance is not a strong clue about the way you can interact with things. It all the ways it is physically possible to interact with things. So, by this definition, a doorknob does afford twisting with one hand. It also affords pushing, pulling, lifting, pressing, and slapping with the hand. It also affords licking with the tongue, kicking with the foot, and lifting with the knee. You can hang your hat on it. You can just look at it. There are typically many affordances for a given object.

Affordance is a perceptual property developed through personal experience. For example, we learn at a very early age concepts like two objects cannot occupy the same space at once, and we learn to recognize hard stiff materials like metal, so that’s how we know, just by looking, that we can’t insert our finger in a door knob. However, affordance by this definition is pretty much culturally neutral: everyone everywhere learns pretty much the same things about the physical properties of shapes and materials.

So by this definition, door knobs and your door handles have the same affordances. Pretty much everything I said about door knobs applies to door handles. If you were to bring in a bunch of people who have never seen a door or cupboard before, they’d be equally likely to twist and pull both the door knob and door handle. Or hang their hats on them.

The lesson of affordances to designers is that, if you want users to interact with something in certain way, then make sure you give it a physical shape and structure with the right material to afford that interaction. It seems obvious, but there are certain cases where designers have failed by perceptually hiding clues of possible interactions.

The term “affordances” took on a new meaning when it was applied to UIs presented on computer screens. By the old definition, every point on the computer screen has the same affordance. It doesn’t matter what it looks like or what it says –it’s physically possible to click, touch, lick, head butt, etc. any place on the screen. Affordances, by this old definition, is not a very useful concept to modern UI designers.

So a new much looser and less formal definition emerged, which is basically affordances are the interactions a thing communicates. Blue underlined text, for example “affords” clicking or tapping –more so than plain black text, or empty white space for that matter.

But what does that really mean? It means users have learned an arbitrary cultural convention –blue means "click this," black does not. This is the definition of affordance that you are using for door knobs versus door handles. By this definition, if a knob in you culture means pull, and a lever in your culture mean twists, then a door knob does not “afford “ twisting.

I’ve come to the conclusion that this definition of affordance is a disservice (even though I’ve used it myself). First of all it’s unnecessary. You can simply say “that’s the convention” or “that’s what users expect to do to that” or "that's a familiar idiom," or “that’s a consistent UI” (i.e., things that look the same as what the user saw before act the same as they did before). There’s no point in getting all jargony and saying “that’s the affordance.”

Second of all, I believe the new loose definition of affordance breeds in designers a misperception that certain visual properties on the screen inherently communicate interactions, the way physical objects inherent communicate possible physical interactions. With very few exceptions related to Gestalt principles, visual properties on the screen don’t have any inherent meaning. It’s all about what the particular user is used to. If we forget that, we can design the wrong thing for the wrong users.

As stated earlier, I think the title of your question is incorrect. Most citations referring to knobs offering an affordance of rotation are typically referring to knobs other than the ones on doors. Such as the ones on a radio tuner...which tend to have a lot more physical (and visual) cues as to how to interact with it (knurled 'grippy' edge, a tick mark to indicate position, a radius of labels around the perimeter, etc.).

A door knob, by itself, really doesn't offer any affordances that it can be twisted. It does offer the affordance of 'gripping' and that is something people use as an example of affordance. However, the act of twisting is more of a learned behavior (similar to the comment about underlined blue links in HTML).

A simple example in the real world that comes to my mind is my Honda's GPS controls. They consist of a dual-action knob that can act as both a joystick and as a dial. I don't find it intuitive, but figured it out finally via trial and error. When I had a friend in the car, I kept telling him to twist the knob to change menus and he couldn't figure it out. The catch was you had to hold a particular part of the knob to get it to twist. There was also no labeling or any other indication of what the knob did. You simply had to know ahead of time via training. My point being that knobs, by themselves, really do not offer up great affordance in terms of how to use them in a twisting motion. Knobs on devices tend to use a lot of secondary affordances to communicate 'twistability'. What makes door knobs 'twistable' has a lot more to do with history and learned behavior. As such, one could argue that any door knob today does offer affordability because we're already all familiar with other door knobs.

I would argue that saying 'door knobs offer good affordance as to being twistable' is simply a poor example of affordance. As to why people use that as an example, I'd argue that few actually do and that we misread 'knob' as referring specifically to 'door knob'. And those that do, many of them are referring to the affordability it offers up to be gripped--not twisted.

Your observation is a good and nuanced one.

Door handles are used frequently as cases in design texts because they can represent: 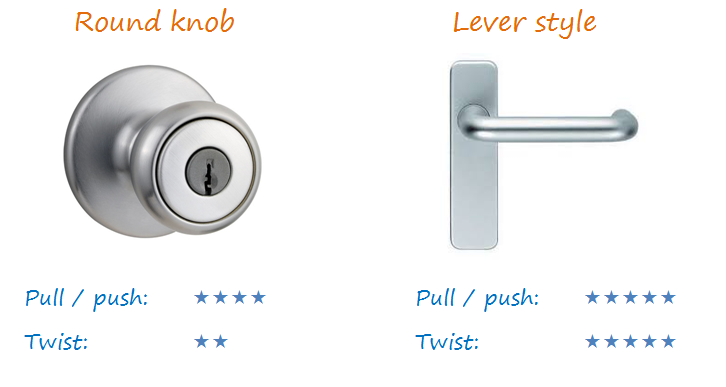 The round knob design persists today not because it has the best affordance, but for other factors which can supersede affordance including style (it's less intrusive, so you see it more commonly in home interiors), cost, mechanical durability, and symmetry (unlike the lever knob, round knobs can be indifferent to left/right handedness and left/right placement).

Not the answer you're looking for? Browse other questions tagged physical affordance doors perceived-affordance or ask your own question.

14
Why do manufacturers of most small/medium refrigerators default the door to swing counter-clockwise?
4
Why do revolving doors rotate counterclockwise?
105
Why do showers have “hot” and “cold” knobs rather than “temperature” and “quantity” knobs?
1
Why do trunks for cars typically open upwards?
9
Why do car doors have an almost-closed state?
1
Why do most doors have a knob or handle that must be turned to open the door?
1
Smart door locks better UX?
36
Door handle on automatic doors - why?
2
Which animation or visual queue indicates that there's more content below on mobile