Research Study App - Could use some tips!

Really new to the UX field as well for designing for mobile. Currently working on a behavioral research study with the use case being for 500 incoming freshmen college students. 250 will be the control group receiving only an app with a schedule for their classes. The other 250 will receive the scheduler as well but they will be prompted behavioral questions (pic attached) as well as be recommended certain things based on how they answered the questions. They will be asked these questions once a week. They will be able to track progress and receive feedback on how they're doing. Lastly, they will receive incentives for doing each behavioral query.

What is the best way to go about this? I'm looking for any tips or advice since I am new to the field. If you have done something similar please feel free to message me privately.

*** Currently, I am getting started on how the behavioral queries are asked.

I'm looking to see if there's any better alternatives to toggle buttons in regards to answering queries (as seen in the attached picture). The researchers are not concerned with specifics so yes/no would be best. 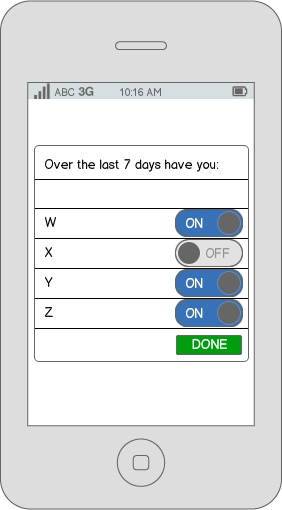 Toggle buttons are an interesting alternative to radio buttons and in this particular case it would look very similar to what you have and would take just about the same amount of space. In that respect there would be little difference. One of the differences would be that the toggle button is a bigger target than the radio button. Of course toggle buttons often have a state ambiguity issue which lead many to recommend that toggle buttons be avoided.

In THIS particular case, assuming a long list of yes / no answers, I think a toggle button is worth considering. Toggle buttons are quicker and easier to hit when you have a long list of items to select. They also make it easier to tell if status is on or off. I use toggle buttons extensively in the internal business apps I work on. We've tested them on our users and they love them. One caveat to this assertion is that the users reuse the same forms (and form types) every day in a business setting. They're interested in speed (and to be able to quickly scan to see if everything looks right).

You will have to set things up, and word things well, so that the user knows that inactive is a NO.

You can see that the ambiguity issue is front and center with toggle buttons. The off state means something. It's not simply in a "I haven't answered that question yet" state.

The interface should look more like this if you are asking users a set of yes/no questions: 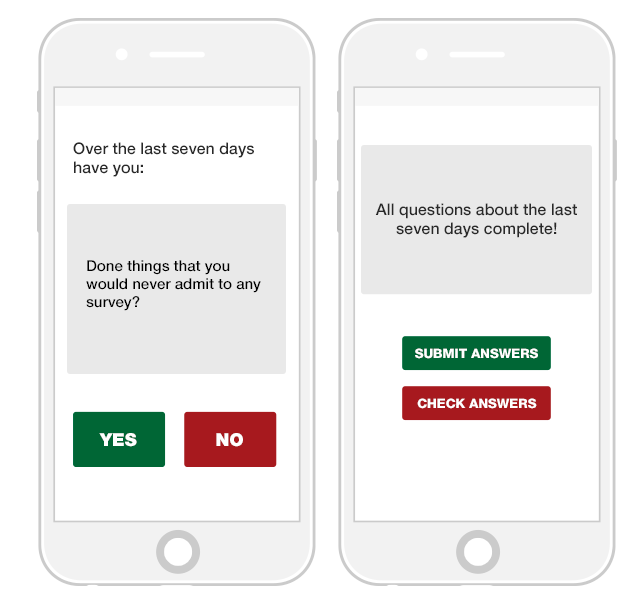 This is designed for the user to focus on the questions and answer easily (buttons don't move/change).

I'm curious about your research design. Your control group should have the identical experience but without the treatment. In other words, the only difference between the 2 groups should be whether or not they receive the recommendations. You are potentially creating a confound by only giving the behavioral questions to the experimental group. Just asking the questions could cause a behavioral response/change. Not to mention only offering an incentive to 1 group to come back to the app. As I read it, there is nothing that brings the control group back to the app every week. You are creating a huge discrepancy in time-on-task between the 2 groups.

Not the answer you're looking for? Browse other questions tagged usability mobile user-behavior buttons user-research or ask your own question.

7
How to recruit participants for usability study of a mobile app?
4
Facebook LIKE vs SHARE button
17
The design and implementation of the purely theoretical “self destruct” button
1
Booking a class with pay now and pay later option?
3
What's the term for modeling detailed customer behavior in service/UX design?
2
Is there a function to get the optimal number of choices in a Likert scale?
3
When to ask for subscription payment
25
Customers using the New Order option when they should use Reorder
2
Research - What is the best way to name a study?
2
Any link to some usability study on dashboard menu?