What symbol can be used to denote "contains"

Our UI has a table of data, with the first row containing input fields in each column for searching based off the data in that column. We want to add a dropdown that determines how that search text is used. We want to be able to do the following comparisons:

Space is at a premium, so ideally, each value in the dropdown would be one character. For the 1st three above, we would use ">", "<", and "=". However, I'm not sure what character could be used for "contains." Ideally, it would be a single character, but I could live with 2 or maybe even 3 characters. I just don't want to have use the word "contains". Is there any symbol that a user would intuitively recognize as meaning "contains"?

Also, we're considering being able to do a "starts with" and "ends with" search, so, if there are symbols that would tie in these 2 with the "contains" search, that would be of great help.

I should also note that the users probably won't know more than basic mathematical symbols. I'm hesitant to use some of the symbols mentioned in the current answers (⊂, ∊), because I'm not sure many users would recognize what they mean.

I'd make a custom control which shows just the symbol when collapsed and the symbol + text when expanded.

This way both concerns (about space and symbol choice) turn less important, because when the dropdown is expanded, it's supposed that the intended action is just to make the selection, so you don't care about it taking more or less space, then you could just show the text when expanded, so the symbol serves just a reference of the text. 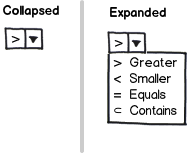 The mathematical symbol for "contains" is ⊃. For "starts with" and "ends with", the symbols ^ and $ are used in regular expressions. However, it is unlikely that your users are familiar with these symbols in this context.

Use WILDCARDS instead. Most users recognize the use of asterisk * as a placeholder for unknown text during textual-search. This way, you'll also be able to completely drop the dropdown.

At Trilance we've got the same problem trying to create an advanced UI for filter tables and data.

We solved creating a new code that the user will easily learn. We have chosen to use these new symbols instead of mathematical ones because these are more likely recognizable and memorizable.

But this solution has some limits: 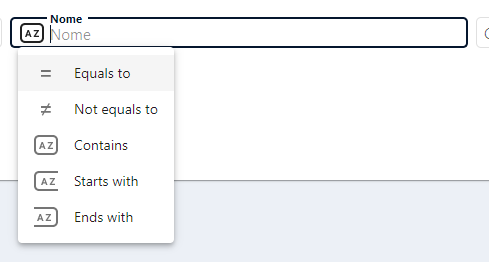 Usability is more important than accuracy

At least, in most cases.

Only you can decide what is best for your app.

From a UX perspective most of those symbols are problematic with the exception of '='. I'd imagine your users are familiar with '>' or '<' for sure, but even that could be troublesome as some people might need more context. All those others indicating 'contains' etc are definitely not user friendly. If this is only ever going to be in a PC setting within which users are navigating via a mouse/cursor then maybe you could go with those symbols and look at using a tooltip on hover to describe what they represent.

Otherwise I'd consider (I'm aware that perhaps your project/table may not permit this) having a drop down that is larger than the columns or rows around it i.e. sitting on top of the content around it. As it's only going to be used then disappear so it doesn't matter if it obscures other things and then you have the real estate to put full words.

Obviously tables are really annoying to style or build unconventional functionality into so don't take that suggestion too seriously. My main point is this:

Words over symbols if you can find a way. That's the best option in terms of UX.

While other answers have correctly pointed out the symbols for supersets and subsets, if you are ok with mathematical symbols, you might also consider ∊, where x ∊ Y means x is an element of Y.

x ⊂ Y means x is a subset of Y, which is, strictly speaking, not exactly correct, as elements of sets have no particular order. Thus, for the expression "ee" ⊂ "beet" to make sense, ee and beet would have to be considered sets of characters, while ignoring the order of characters. Strictly speaking, the correct symbol to use would be ⊆, unless we want to exclude the possibility that x matches the entire string.

x ∊ Y is a bit more accurate in this regard. While "ee" ∊ "beet" still is not entirely correct (as beet would again have to be interpreted as a set), one might argue that if beet denotes the set of all substrings of the text "beet", this could mathematically make sense.

In any case, the "spoken form" of ∊ allows for a more natural way of expressing the contains relationship, as "ee" ∊ "beet" can be read as "ee" is an element of "beet". In some languages, this is further helped by the obvious resemblance of the ∊ symbol to the first letter of the word it stands for, element, whereas a ⊂ could be mistaken for a "strange-looking c". Rather than the word subset, this could be associated with contains/contained in, but exactly as both contains and contained in would fit, the direction could be confusing, whereas there should be no such issue with ∊ ("is elemented in" isn't a word).

Lastly, and this might be very location-dependent, the mathematical symbol ∊ might be slightly more well-known than the ⊂ symbol. At least as far as I remember, I got in touch with the ∊ symbol in my regular math classes at school somewhere between grades 6 and 8 (i.e. at roughly 12 to 14 years of age), whereas I'm not sure I ever saw the ⊂ symbol (or related symbols) before entering university.

Alternatively to these mathematical symbols, you might use some other short notations:

There is a mathematical symbol for expressing something like 'A has x' and it's the subset symbol: ⊇ and ⊆ or ⊂ and ⊃ (there is clearly some disagreement on how to use it consistent). I highly doubt this symbol is recognized by most users. Maybe use the word 'contains', or if space is really sparse, maybe use the word 'has'?

Such great suggestions in here, but I'd suggest:

Not the answer you're looking for? Browse other questions tagged search symbols or ask your own question.

2
Displaying Search Results in a Confined Space
3
What's a typeable symbol to indicate "starts with" in a filter field?
4
Syntax conventions for search terms: wildcard, literal, options, etc
2
What symbol(s) can represent difficulty level in the context of a game?
2
String contains operator character
3
What is the opposite symbol of "empty"?
0
search suggestions and other list filter fields
1
Is there a benefit to adding the punctuation symbol in parentheses when referring to punctuation?