Save vs. Submit - Clone the [Original] Record on Submit?

Before anyone says this is a duplicate, this question isn't about wording of Save (as draft) and Submit buttons or their positioning on a form.

For our app, we'll assume that the user knows that Save will save only data, and Submit will both save and publish (so that a supervisor or the general public will be able to see it, or you're telling an external (to the app) service to generate a[n] audio, video, slide show, etc.)

As a user, I would be overwhelmed with the unsolicited generation of so many duplicate records, and I wasn't even given the opportunity to name the duplicates. It's like I have a Word document, and every time I print it, a clone would be generated and each clone would be named serially (prepend Copy x of [Original]).

What do you suggest us to do? How would we rework this?

If the answer to the question is "it depends", for which situations would be yes vs. no?

Seems like there's two cases of "cloning" functionality here from the user's perspective.

"Clone" as in I want to explicitly copy the file and use it as a template for something new.

"Versioning" as in as I make changes, the system is nice enough to track historical versions for me.

This secondary action should happen in the background by the system. Think of Time Machine on Mac OSX. I love the reassurance that the system is backing up older versions of my files as I make changes to it, but I couldn't care less how it's actually doing it. Much less, the fact that for the system the action for both copy and versioning is identical.

So see if you can have the system create copies in the background, but don't directly show users those historical versions in the listing. 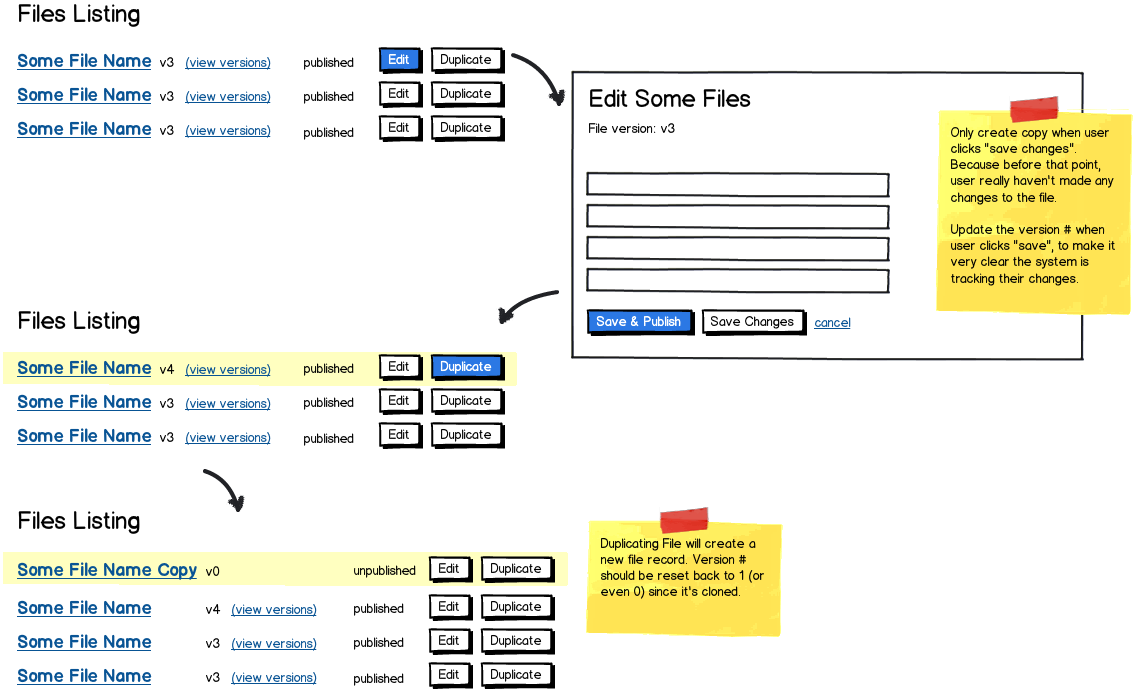 Not the answer you're looking for? Browse other questions tagged save submit or ask your own question.

19
If input text length is known, do I really need a submit button?
1
Validating and (auto)saving data records created by user
22
Should a save button save information that is not on screen?
7
Save & Continue Button
4
Evaluate vs Save
2
Data table: inline edit - save/cancel on other action?
1
When to save settings that span multiple pages?
0
How to apply add/save from modal window
5
Should you allow users to "save" options that haven't changed?