I have a brief where I have to build a system that helps engineers identify defects on a building site.

The engineer specifies where the defect is on a floor plan, what the issue is and invites another user to fix it. 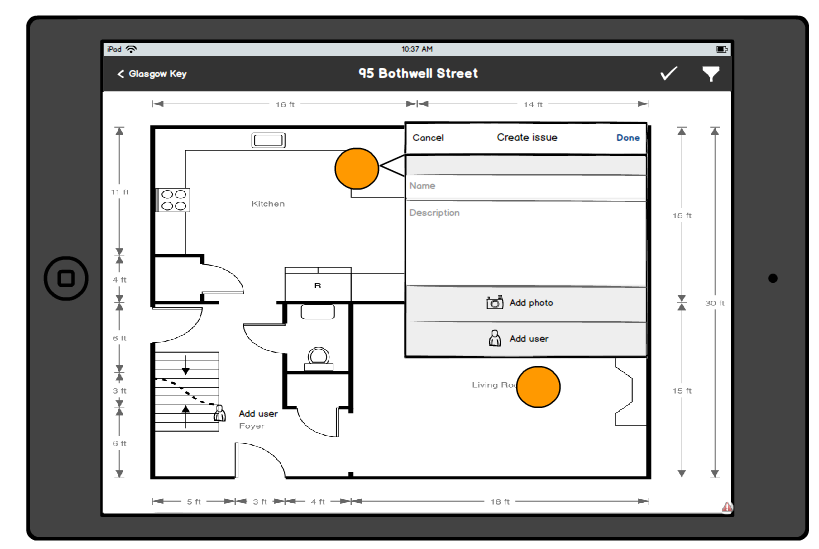 This is a very simple concept.

But someone has thrown a spanner in the works: at any given point on the floor plan, there might be more than one issue associated with the point it is indicated in the floor plan. An example: a hole in the wall might require an electrician to fix the wires and a plasterer to fill the hole.

But I don't know how to display this; I really like the concept of one point, one issue because it keeps everything simple and it is still the main use case.

The site manager will want to raise more than one issue at a point at the same time, so the interface needs to legislate for this too.

2)Is there a standard pattern for creating multiple issues at one point? If you look at my wireframe I think it would be something like having a link saying 'add another issue at this point'.

How about the same circles but with numbers inside dictating the number of issues for that spot, you could provide an instant visual indicator of the types of jobs by colouring the circle:

The numbers in the circles is still a good suggestion.

The case you are describing is still one issue, but the workflow to address the issue requires more than one person.

However, there are cases in a building where there could be multiple issues that require one or more people to address.

Color-coding by trade might become really cumbersome. Using color to indicate the severity of the defect (if that's important to the brief) would make more sense, and adding a number inside the circle (or a numerical baloon attached to the side of the circle, like many apps do now to indicate waiting actions/messages/etc) is a very good idea.

Adding an "Add Issue at this location" (Or "Add Issue") button beneath the "Add User" button wouldn't complicate the UI very much.

I don't know if you are developing something for wide commercial use, but I can see municipal building inspectors using this app to generate a report for both the municipality and the property owner.

Can you put a the number of issues in the circle, and show a list to select from when it is clicked?

If there is only one issue on that location, you could put that issue at the top, and a second "add new issue" option under it.

I'm imagining the issue is in an inset window but it doesn't much matter. Add a bar at bottom of issue presenter that says like "3 more issues". This bar should not be to narrow in height. When user clicks the bar the issue window becomes a list that gives the names of the probs or maybe the name and user depending on whether that seems more simple-minded. Click on list-name returns that issue to the window. Plus, this sort of behavior is typical.

I have recently answered a question about displaying machine state in a manufacturing site and I think your issue is similar to an extent.

The rationale behind creating a third view is to spread functionality in a more efficient and clear manner while also avoiding overloading the building map with too many task. This will allow you to streamline the defect capturing process and allow your users to "tag" them more easily. Information captured could then feed into the filtering process for better findability and action taking.

Not the answer you're looking for? Browse other questions tagged information-architecture or ask your own question.

2
Anyone have experience with Customer Carewords
3
can user-generated tags help organise a site's IA?
1
Need help with create “Change History” interface
2
Help with information architecture vocabulary
0
how to deal with objects in a system that can be related as parents and siblings
0
Customers with multiple locations
4
How to consolidate two web platforms with slightly different IA?
0
UX best practices for a help desk/ticketing system? Views and steps