How to add dependencies between tasks in a list

I have a list of tasks that can be dependent on each other, e.g. task #2 cannot be begun until task #1 has completed.

I need to create a user interface where the user can add tasks to her list and configure the dependencies between tasks herself.

My first thought was to have a table like so:

But this is not very easy to look at for a not-so-technical user, and it does not visualize the relations between the tasks very well. 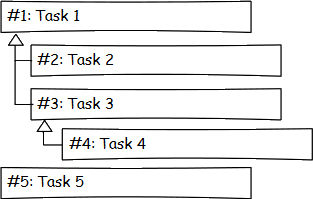 but I can't figure out how to represent one task being dependent on several tasks (e.g. if Task 4 depends on both Task 2 and Task 3 but these two are independent of each other). Also, if all tasks are dependent on the previous task, this would result in a list that indents quite a long way in.

I also thought about visualizing it as a Gantt chart, but this is just as technical as the table solution.

Does anyone have any ideas on how to solve this task in a user friendly way?

1. This is a well-trodden problem

3. Text representation is easier to build, harder to get right

4. Make sure your app developer knows what he is doing

In your example, instead of displaying tasks 2 and 3 vertically, you can display them side by side, in more of a flow chart representation, and they both connect independently to task 4.

This may get cumbersome depending on how many tasks you're visualizing. There may need to be more cues, such as shape and color to help organize a large array of tasks.

I would probably reverse the order of the columns in your first table and maybe even call them Prerequisites -- things that are required before doing this task.

Not the answer you're looking for? Browse other questions tagged usability gui-design layout or ask your own question.

0
How to unobtrusively add item to a current scrolling list?
3
Add button for grid list
3
Huge horizontal sortable column lists issue
3
Advice/resources asked for designing a sort of “tasks to complete” layout
2
Layout for survey
0
Mapping Pane Simplefication
0
Recommended option to add item list from predefined list
2
How to add a list item of different type
4
What's the best way to inform users the results of their UI selections before they make the selection?
28
Should I hide continue button until tasks are completed?