How to deal with multiple feedbacks from a single action

The interface has to show both icons/buttons at the same time, and it has to give the user feedback when the item is already on the list or if it has been featured.

My solution so far is not close to satisfying: the icons' states change when they have been used, but giving feedback on a button that the user has not actively tapped on is quite confusing. 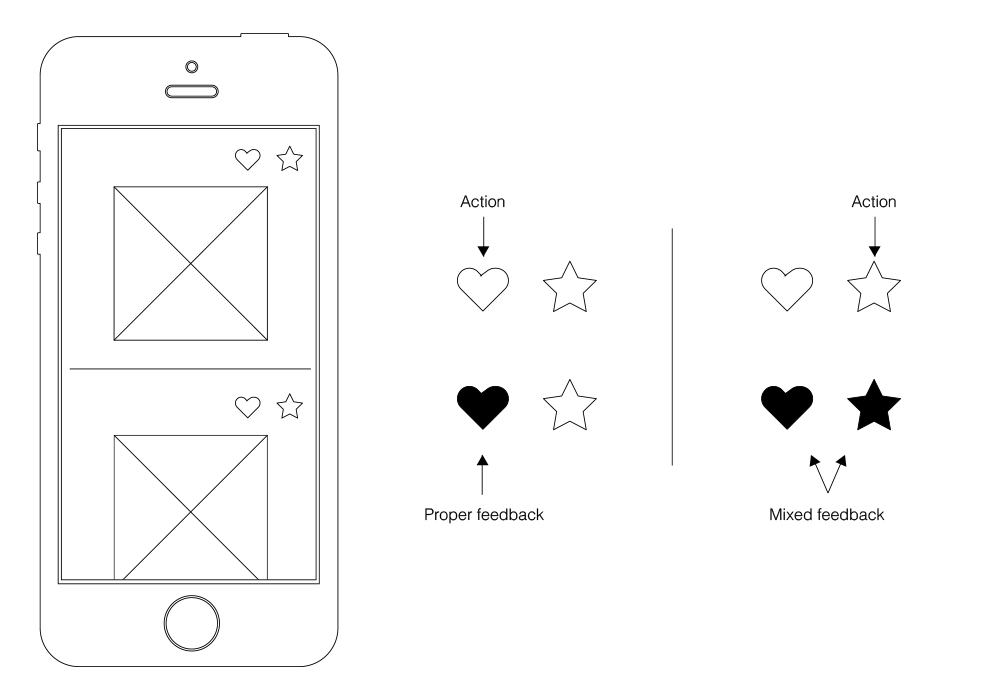 Is there a pattern for this kind of situation I am overlooking? Can my approach be way off?

Edit: According to Izhaki's point about Group Theory, I could go with something like this, witch is a good progress: 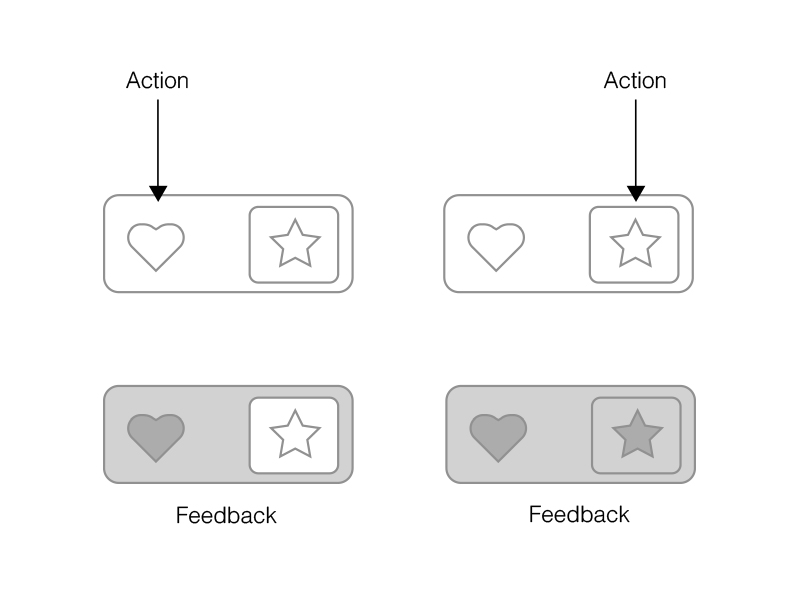 IIt still feels quite complex for my average user. Maybe I should try a whole different approach, something like a two-step confirmation? User adds item to list and is asked if he wants to Feature it also?

I think you are applying your knowledge of the functional logic, where in your mind it's a case of:

But that suggests that B can exist on its own, and you are treating B as an independent group like so:

But this isn't really the case - with the interface provided, say someone presses the star, which will highlight both the heart and the star, and then presses the heart. In theory, only the star should stay on, but that is disallowed.

Instead, what you have is the full list of items A, and B which is a sub group within A, like so:

Which really leaves you with the logic:

In other words, the user either selects A (heart) or B (star), where the fact that B also mean A is implied.

Now that implied hidden logic is likely to be problematic. You could make things clearer by instead of providing a heart and a star icons, provide and heart and a heart with a small star on it.

Also, it could help if the interface makes it explicit that what's in B must also be in A, something like this:

Priority patient is still a patient

Don't think there's a pattern for this, but I've seen this done in games (adventure rpgs) for collecting items and placing it into inventory/bags. They animate the movement of the item into the right location. This translates fairly well into mobile apps.

This assumes your two lists are visible on a tab bar. User taps on the action. You show an thumbnail (or icon) that represents the item and you animate it to the corresponding area on the tab bar. A minor "blip", color change etc would be nice to denote the item has been placed into the group.

If it needs to go into two groups consider making the thumbnail do two bounces. First into the main expected group, then over to the extra group.

To echo and add on @nightning 's answer above, you can check out several apps that use animation to provide feedback of moving items to lists.

Apple's mail app famously shows an animation of the message being flown to other folders when you move it.

Another example you can see in Ikea's iOS app: when you add an item to your shopping list, the picture of the items flies into the list shortcut on the bottom.

Not the answer you're looking for? Browse other questions tagged icons feedback states or ask your own question.

14
Which is a good method for delete without confirmation?
8
Is there ever a circumstance where the user should be notified of a user interface no-op?
5
What Is the Best Approach To Minimalist Buttons (Icons)?
13
Do iOS / WP users recognize the Android share icon?
4
Should we force users into providing feedback before dismissing an action item?
5
What kind of feedback is appropriate for a two-finger drag gesture?
8
Context-switches & integration of workflows to avoid them
13
Get User To Click The Feedback Button
2
Intuitive representation of "increase priority"
0
How do I best make a tally of items on a mobile phone