Do you think trace typing (as provided by apps like Swype and SwiftKey, and now integrated in many smartphones UI) can replace touch typing? Any data on typing speed with this new input method?

I was thinking that it would be interesting to have a flat PC keyboard on which you can combine both typing methods for even faster typing speeds?!!

Since you asked for data, the following answer on skeptics stackexchange has good references to two studies which conclude that there is no net performance advantage to using swype over conventional touch keyboards: 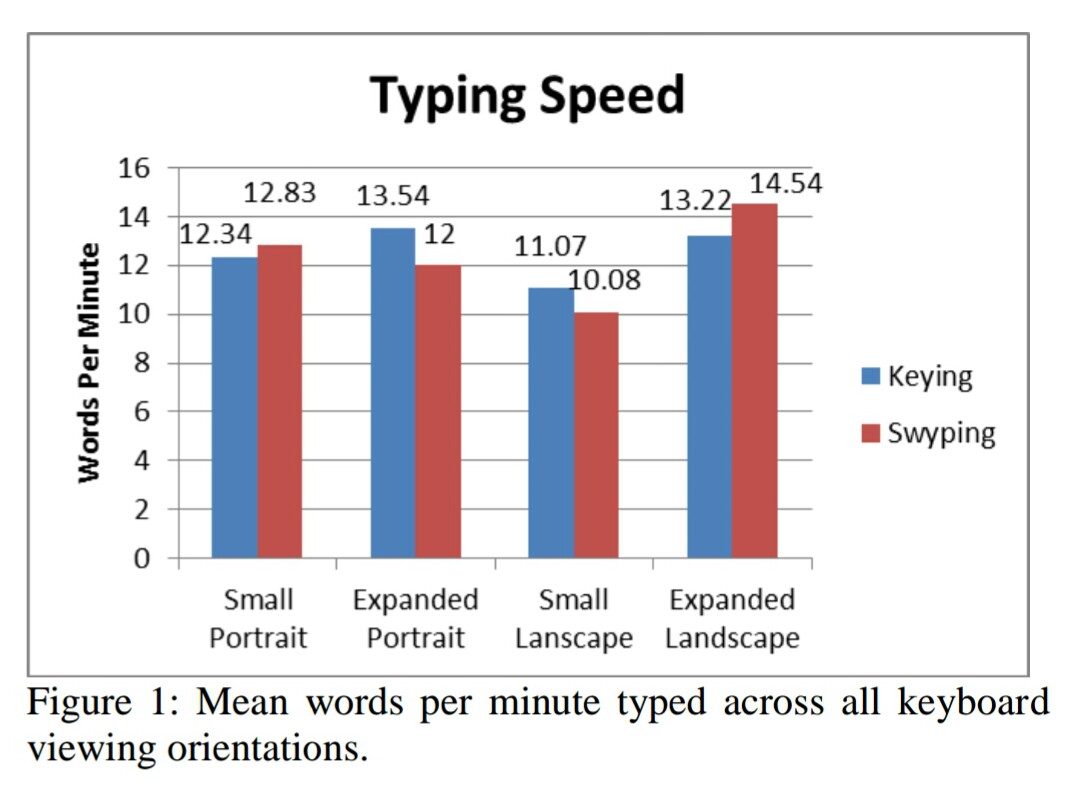 The two studies are here:

There have been some attempts to create hybrid swipe/touch keyboards. One notable effort which grabbed headlines last year (circa Jan 2014) was hipjot:

I don't think a full size swype keyboard would be successful. You can see for yourself using a low-fidelity prototype: just print out a full size keyboard on a sheet of paper (eg this) and try swiping across it. You will see that the distance your fingers need to travel is much greater, which renders the keyboard much slower than the standard touch typing interaction.

Btw it's interesting that the studies show a bias in perception towards swype. It's an interesting UX point to ponder. I believe the swipe interface provides a greater illusion of speed for users because there is tactile feedback as the user slides between keys, even though performance yields similar results and air provides less resistance than glass when moving between keys.

The wikipedia page on Swipe states:

The creators of Swype predict that users will achieve over 50 words per minute, with the chief technical officer (CTO) and founder Cliff Kushler claiming to have reached 55 words per minute.

This appears to be based on company claims rather than actual evidence. However, even if we take these claims at face value, this speed is at the low end of what a professional typist can do:

An average professional typist types usually in speeds of 50 to 80 wpm, while some positions can require 80 to 95 (usually the minimum required for dispatch positions and other time-sensitive typing jobs), and some advanced typists work at speeds above 120 wpm.

Several people have managed to type more than 200 WPM.

And this is comparing a "dumb" keyboard to technology that enhances accuracy with software. Keyboard entry can be even faster when combined with similar software technology. For example, some stenotypists can type over 300 WPM and >200 WPM is the norm.

It is possible that trace typing speeds will be competitive for non-experts. However, I doubt they could ever compete with keyboards for professional typing. The action of moving one's finger across the screen requires greater precision than typing with keys, and I think this is a physical limitation that won't be overcome.

The technology is a great step forward for text entry on a phone, though (update: maybe in my subjective opinion only).

Trace typing isn't new. It was invented over a decade ago and was known as IBM SHARK.

There are several crucial differences between current smartphone keyboards and the original concept:

The ultimate point was not to let the user connect letters without lifting a finger, but to let the user write in "shorthand." Ie, to not think about letters at all but let the word's shape be memorized and written as a sort of hieroglyph.

Shorthand (hieroglyph-like) handwriting is known to be a very fast alternative to standard handwriting and typing, allowing speeds in excess of 100 WPM, so the potential for a computerized version is large.

I believe that by embracing SHARK's two advantages, using powerful algorithms, and anticipating sufficient practice on a user's part (which, of course, is unthinkable these days) can lead to significant typing speed gains over a tap touchscreen keyboard. However, I'm not sure if it would be faster than a full physical keyboard, especially when used for non-lexical input.

Trace typing cannot replace key-based entry methods because it does not have the capabilities that key-based methods do.

In order to provide a smooth input experience, trace typing is generous in converting your swipes to words rather than precise. Thus it represents a "best guess" as to what you intended to type based on your action and on the words it thinks you may be trying to enter. This is usually beneficial but if I want to enter a word that is not in the dictionary it suddenly becomes almost entirely useless. To enter new words you need to switch to key-by-key entry.

Not the answer you're looking for? Browse other questions tagged input keyboard or ask your own question.