Form validation - When should error messages be triggered?

I'm working on a registration form with real-time inline validation. I'm wondering when we should trigger error messages: 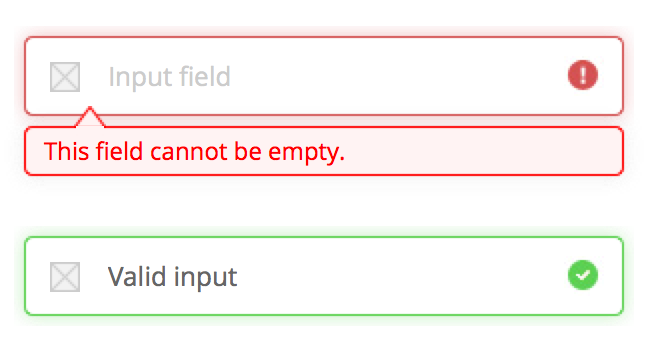 One relevant study that springs to mind is described by Luke Wroblewski in Inline Validation in Web Forms. It found that validating inputs prematurely can be harmful and that validating fields after input helps users to complete forms more quickly and accurately.

To better understand when to show inline validation messages, we tested a few variations in the top half of our form.

In this version of the form, we displayed a validation message (success or error), after the user indicated that she was done answering a question by moving on to the next one. (This is validating “on blur” in technical speak.)

In this variation, we displayed (and updated) a validation message while the user answered each question. (That is, “on key press.”)

In this version, we displayed a validation message before the user answered each question—that is, as soon as they focused each form element—and then while they answered the question. (This is validating “on blur and on keypress.”)

When we used the “after” method in the first half of the form, participants completed the form seven to ten seconds faster than when we used the “while” and “before and while” methods respectively. The “before and while” method not only caused longer completion times, but also produced higher error rates and worse satisfaction ratings than the other inline validation variations we tested.

3
When is the best time to validate an Input Field in a form?
6
Form validation ? When to trigger error validation?
5
Form Validation: out of focus vs. delayed onKeyPress
2
Validate an email while this in the input field - when do you start?

11
Generic clientside form validation
3
When filling out a form to what extent should validation be done while the user is still typing?
16
Should we avoid negative words when writing error messages?
3
When should I validate that the password in a confirmation field matches the first password entered?
1
When should an input's validation message show on a form that has already been submitted?
6
Form validation ? When to trigger error validation?
1
inline form validation when user tabs out of an empty field
1
How to incorporate error messages in a form?
7
When should the error state on an input field disappear?