Why do speedometers (in the US, at least) go so high? [closed]

This question does not appear to be about user experience within the scope defined in the help center.

Typically one doesn't drive much faster than 80 MPH. Even in an emergency passing situation, it would be extremely rare to drive more than 100 MPH. In fact, as far as I know many cars have governors built into the engines that prevent them from going much faster.

Yet in the United States, most cars made in the last 20 years have speedometers that go up to 120 or 140 MPH. Why? It seems to me like it might encourage people to drive faster. Or does it make the car "seem" faster if normal cruising speed is a smaller percentage of implied max speed?

Others have focused on the psychological effect of the practice, primarily with relation to sales. But I'd like to focus on what one should think of with a speedometer that is free of these sort of plots.

In places like Germany or the Isle of Man, there are highways on which there are no speed limits.

Different countries have different speed laws. Having to tailor each car to its target market would increase cost and distribution complexities.

Rules can change, the system doesn't

To continue the point above, imagine the state of California decides to remove speed limits on some roads - this could cause problems with some cars whose speedometer was designed with some local speed restriction in mind.

Imagine your friend got stabbed, he's bleeding heavily, and you must rush him to a hospital. There are no ambulances in your village and the hospital is 10 miles down the highway. It's 3AM and there are virtually no cars on the road.

When the life of someone is at stake, even the most law-obeying citizens might break the speed limit.

While main role is to communicate speed, the speedometer is also representative to the limits of the system, basically telling users "You are this far from what this system can handle".

This is an important point - whatever the normal range of speed is, it is still important for users to know what their car is capable of. In most cases this is important for marketing, but there's also a matter of safety here.

If the limit set by speedometer is a false one, you risk people pushing the car over that limit ("it feels OK, surely the car can handle this"), with no indication when they approach the real limit. 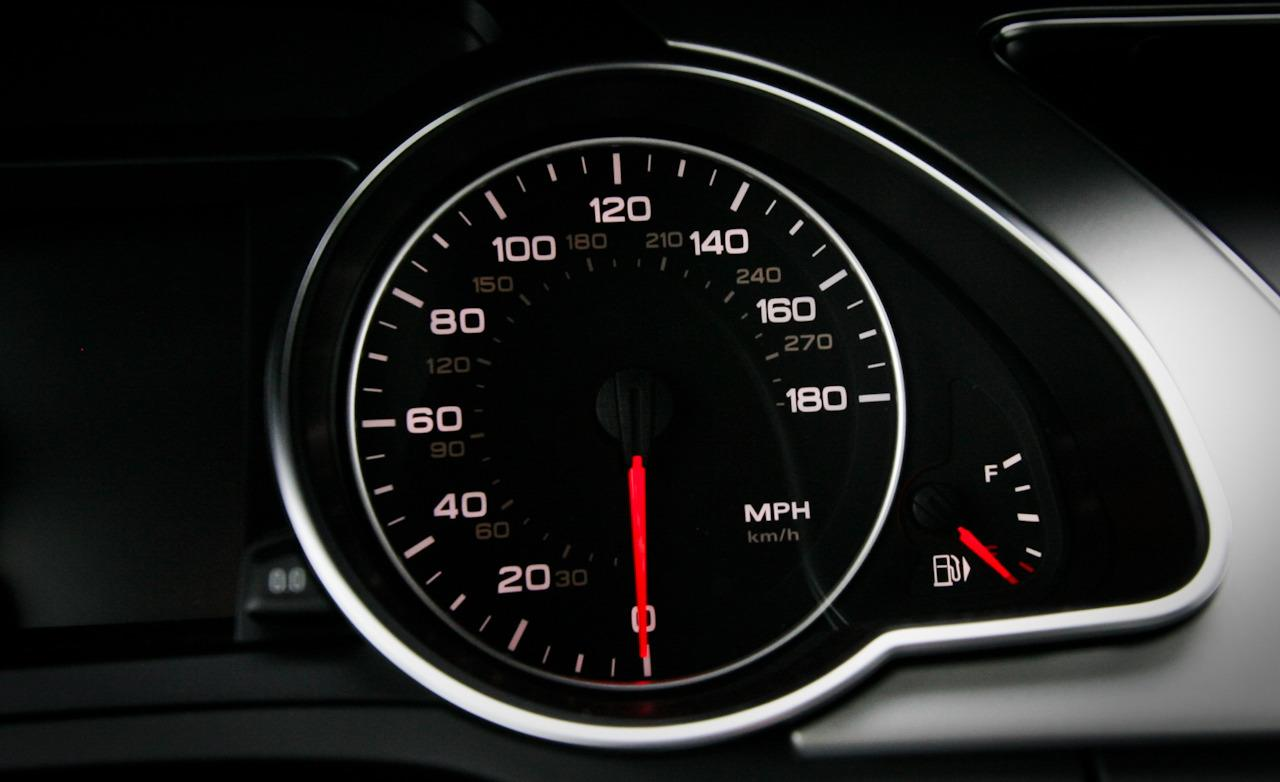 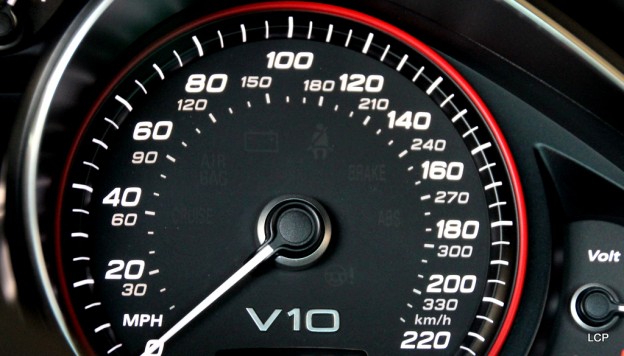 Driving at 160 MPH should be perceived slightly differently on each car.

Now all of the concepts above are surely to be muddled by inconsistencies and marketing plot. But if you exclude the latter, or any other psychological design decisions, it is important to see the speedometer as a system-first type of device.

Doing a Google search for "Why do speedometers go so high?" yields the following top 5 links:

Link 2, from Mental Floss (someplace everyone should be visiting regularly) links to this news video which says why. The article pointing out:

According to former Nissan executive Larry Dominique, “Eighty percent of cars on the road are not designed for and will not go over 110 miles per hour,” regardless of what your speedometer claims. Moreover, tires usually can’t long endure being pushed over 130 miles per hour.

The rationale being pointed out as "There’s a small matter of salesmanship."

Link 3 says much the same thing, but also points out using the same hardware across the world to save money (thus in places, and on models, where over 85 is possible):

The answer has deep roots in an American culture that loves the rush of driving fast. The automakers' marketing departments are happy to give people the illusion that their family car can travel at speeds rivaling a NASCAR racer. And companies often use one speedometer type in various models across the world, saving them money.

It goes on to call out a few examples...

In China and Europe, governments require that the top number on speedometers be higher than a car's top speed. Cars sold in Europe, for instance, have faster top speeds than those sold elsewhere because they can be driven over 150 mph on sections of Germany's Autobahn. So to sell the same car or speedometer globally, the numbers have to be higher, said Kurt Tesnow, who's in charge of speedometer and instrument clusters for General Motors.

Link 5 goes on to talk about some of the greatest offenders on the matter:

Speedometers are an good example of UX hierarchy of needs

The aspirational speed markings (e.g. above 130mph) are functionally useless for many cars, but they enhance the driver's experience by providing the illusion of performance for drivers who have spent tens or even hundreds of thousands of dollars on their car.

Aspirational markers may be functionally less clear (more dense text), less accurate, and less safe, but as long as they meet a reasonable standard of safety and performance, it makes sense for UX to aim for better driving experience rather than driving function.

For the same reason, mechanical watches are less accurate, heavier, and more brittle than digital alternatives but despite being less functional, they provide a better ownership experience for many consumers who are paying a premium not for timekeeping functionality, but for experiential satisfaction.

Actually, the US is one of the few places to have enforced a limit on the maximum speed shown on a speedometer (reportedly to stop people trying to "speed test" their vehicles). For vehicles produced from 1979 to 1981, you'd only see vehicles showing up to 85mph: 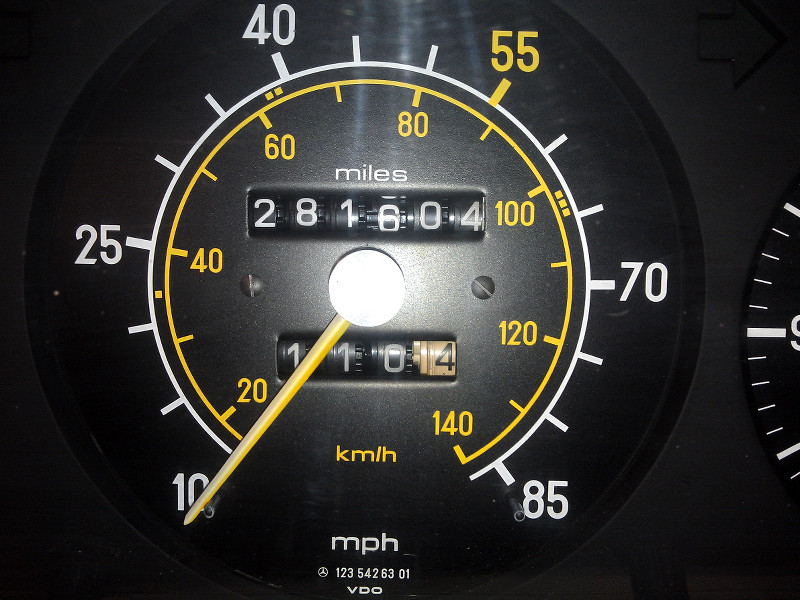 *The same law dictated the highlight at 55mph http://en.wikipedia.org/wiki/National_Maximum_Speed_Law#Speedometers

As others have mentioned, some countries require a speedo to show the maximum speed a vehicle is capable of (or have no / much higher speed limits), in other cases the manufacturer chooses to (possibly for marketing purposes) display higher values. For example, check out the speedo from a Suzuki Hayabusa: 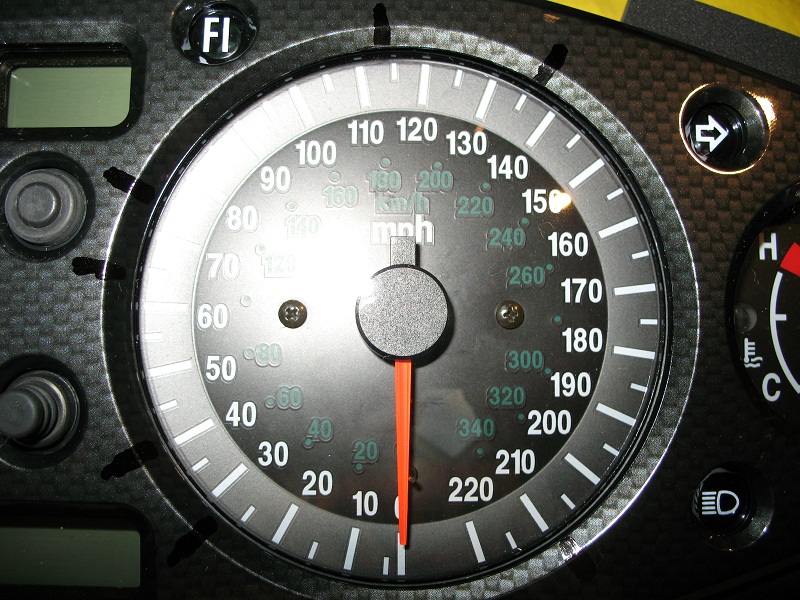 Then we have a typical BMW car speedo, where most of their vehicles are limited to 155mph, the speedometers generally read up to 160mph (even on the models that don't produce enough power to ever achieve that speed): 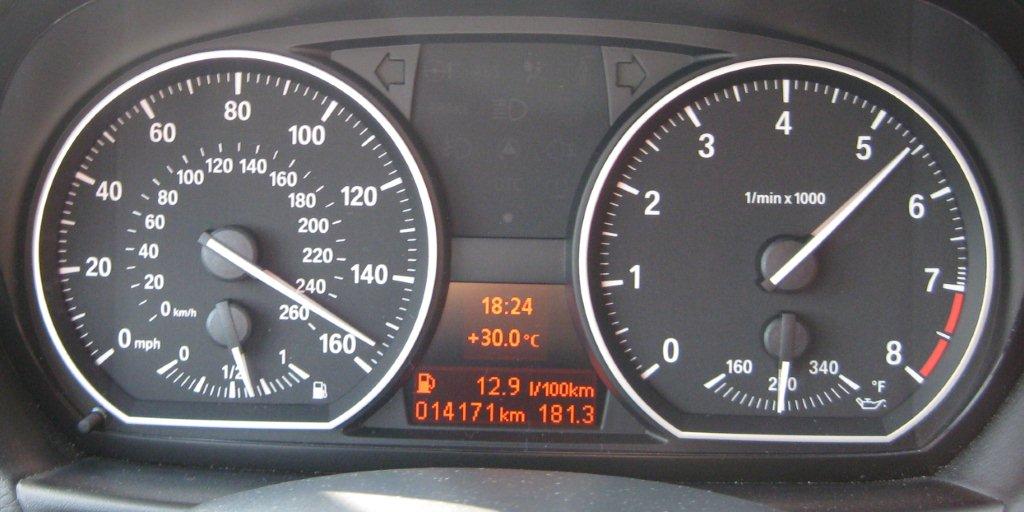 From a UX perspective, it's probably better to provide a display (a gauge in this case) capable of showing all the possible values.

The use case for this in terms of speed could be:

The downside (of a gauge) is that the wider the range you attempt to cater for, the less readable it is and it becomes more difficult to determine your exact speed (as the needle is raised, perspective can affect "read" speed).

Digital displays make it more difficult to read changing values / assess rate of change, but you only need to consider the appropriate number of digits (tens, hundreds, thousands etc.) - a three digit display should cater for most cars, though owners of vehicles incapable of 100mph/kmh might question why their speedos go so high too. :D

Interesting question. Looking around online, it seems to be a combination of marketing (makes the consumer think the engine is powerful) and manufacturing efficiency (can use the same speedometer in faster cars as well as minivans).

It's often set so 65mph / 110km/h (which is a common speed travelled on the highway in north america, legal or otherwise) is on top. It makes it easier to glance down and see your speed on the highway.

If it's pointing up, everything's good.

It is the same here in Europe. I think it is for 3 reasons:

I have absolutely no proof of what I say, but I spent some time in the car market and this is the explanations I see.

I imagine there's some parts commonality going on. My Toyota has a 140 mph speedo which is shared among a number of models. Mine is a sports car that I take to the track and have hit 125 mph in. Track users kind of need the speedo to go that high, other people don't, but there's no extra cost in setting the speedo higher and being able to use one across family and performance models. So, it can make everyone happy without increasing costs.

The UX aspect of this is that by squishing all the important detail into a smaller part of the dial it makes it harder to read and less sensitive to minor variations in speed - particularly if the speedo is trying to show both kms and miles.

And it begs the UX question as to why the analogue speedometer doesn't seem to have been replaced with the digital one on most cars...

I think it's far more mysterious why some people would think that a speedometer would omit showing speeds above typical speed limits.

The jurisdiction of laws is limited to specific roads. There are places where one can drive at higher speeds than highways, such as private race tracks.

Also, if your speedometer was so in awe of typical speed limit laws that it stopped at the legal limit, how would you even know if you were exceeding the limit, and by how much?

Zhaki nailed it. In addition, there is some benefit in a gauge of placing the most common reading in the middle of its range rather than close to the high end. Many measuring devices exhibit different systemic errors in the mid range than they do at the top end. Old fashioned voltmeters and multimeters behaved this way. you could get a slightly more reliable reading by choosing a scale that was roughly double what you expected to measure.

If this is the pattern, then a speedometer that most often going to be checked at 65mph might be calibrated so that the top end is 130mph. In my car, that's about how it is. Moreover, 65mph is just about vertical ( the gauge is analog). So I get an intuitive grasp of my speed without even reading the numbers. This makes a real difference in terms of how long my eyes are off the road.

But it's probably mostly marketing, and mostly deceptive marketing at that.

To put it simply: people DO go that fast in conventional cars - when they take them to the race track.

There are plently of open public race tracks in the United States, and they don't all require you to take or own a race car in order to drive them. In fact, there's plenty of races that pit completely unmodofied commercial cars against each other.

Not to mention commercial cars are tested for top speed, and why bother changing the speedometer out after testing, when the test speedometers will do just fine?

12
Why electric car windows can be automatic for driver's window and manual for others?
15
Why do some cars have the fuel door on the passenger's side?
6
Are dial format speedometers more effective than numeric speedometers?
1
Why do trunks for cars typically open upwards?
9
Why do car doors have an almost-closed state?
3
Why do most car radios have 6 preset buttons?
8
Why is the R in front of the D gear in cars (and vice versa)?