I'm working on a menu that can be toggled on or off, with sub-options within the menu that themselves can be toggled on or off. while logically I think it makes sense for both the parent menu and child options to have toggle buttons, visually it looks a little confusing. I've tried an alternate that uses checkboxes for the child items instead, which looks a bit clearer to me. Is there an alternate design pattern that would work better / feel more intuitive than these two options?

I think a priority here is, let's use the best control for the job.

Here's a result which may be more successful: 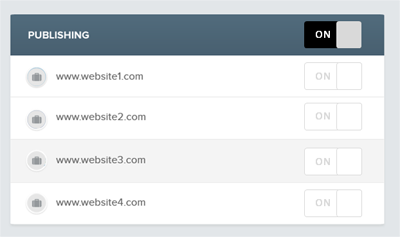 Firstly, toggle buttons are somewhat problematic. Although they are a pretty common design pattern on modern touchscreen devices it isn't immediately obvious that one can activate them just by clicking. A user unfamiliar with this on-screen element but familiar with it's real life counterpart is going to try and drag it as we don't click such switches in the real world.

Also, if you look at sites like GMail or Amazon, who invest huge amount in UX you'll see checkboxes, not toggle switches.

Checkboxes mean on / off (yes, or no; or if you're geeky, 1 or 0) and have been used on the web literally billions of times to represent yes or no, on or off type choices for users.

You do also encounter a problem if you were to use the same element for the parent and the child (particularly a checkbox) as you imitate another very common web design pattern which is the all or none parent checkbox pattern. This goes beyond the aesthetic issue you raise in your question. There are 1000s of examples of this pattern throughout the web.

What I would recommend is the following design:

Where the on and off selections are clearly clickable and where the checkboxes themselves would remain set as the user left them. The current state would be clearly defined by which button was selected

Also, the entire panel would be either greyed out, collapsed or both while in the off state. Both of these actions and the switch in interface state depending on choice would help to reinforce the action.

PS ... I am assuming you want the checkbox set state to be retained regardless of the parent state, if not and the parent is a 'toggle all' function then use checkboxes throughout as this is a very well established, common and usable solution.

Not the answer you're looking for? Browse other questions tagged interaction-design design-patterns toggle or ask your own question.

9
Most effective way to display the enable/disable part of a setup page
12
How to best represent a ToggleButton (representing on/off) with the ability to be locked
2
What's the best web design pattern for a list of people?
2
What's the best design pattern for splitting things in parts?
4
Best way to present toggles for sharing on other social networks?
1
What is the best Menu pattern for large dataset?
5
UI to best convey whether results of selections in a filtering interface return intersections or unions (and/or)
1
A checkbox that can interact / display 4 states with nested child elements
1
How can I best display a three-way toggle (show, show all, and hide)?
3
Dropdown menus: Should the parent item be clickable?