Based on this question I've been racking my brain trying to find a color scheme for journal publications that is color blind friendly and that I actually like. I've tried color brewer and other sites, and they all seem to give color schemes that are just one pastel collection after another.

I tend to only make simple x-y plots with perhaps 3-5 data series (no major data crunching here). "Old" me would have loaded up a more traditional scheme with black/red/blue/green. "New" me wants something better, but all I can find are color schemes that look so pastel. In my field, traditional is the norm, so I don't want to be too outlandish.

The best I can come up with is using a more traditional color scheme, but with different line types (dashed, solid, etc) and data points (circles, squares, etc.) to distinguish data. Can't recall where I saw this but this is one strategy for making more color blind friendly plots.

Is there a non-pastel or non-wild color scheme I could use?

If possible, try to use other visual indicators (line shapes, point markers etc). AFAIK there is no "safe" color scheme for all color-blind; at best, you can address some most common (eg. red=green).

Here's how I might design for these priorities (you'll have to pick your own way):

#1: Use solid, bold, colorful lines for the data, fade the axes and titles to highlight the data. Avoid dashed and dotted lines because they break up visual flow (remember, color-blind is a lower priority so let's solve that later).

#2: We decided not to use dashed/dotted lines above, so (a) use markers to distinguish different data series for the color blind. (b) Avoid using legends (this is a pet peeve for me) because they force reader's eye to dart between the legend and the data. Instead, put series names right next to the lines so it's clear. This will also help color-blind reading.

#3: Now that #1 and #2 are satisfied, you can move onto the subjective palette design. There are tons of palettes available, just pick one.

Here is one result of this process, using a contemporary palette that includes the Pantone color of the year: 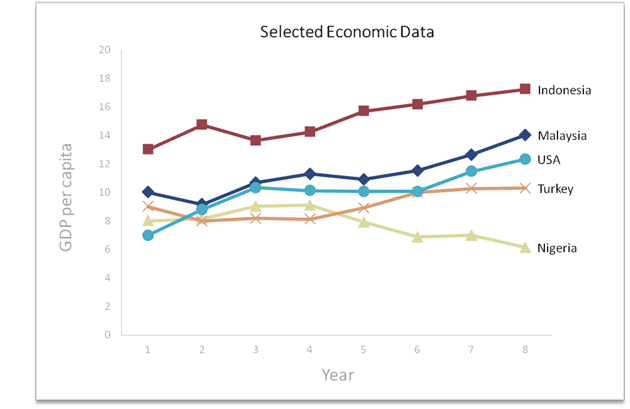 Cynthia Brewer has done a great deal of work in color arrangements, namely for cartography, which can take color blindness into consideration.

She has a website which allows you to select from several parameters, including color blindness, to create a limited set of colors for multiple situations: ColorBrewer. The color selection is put in the context of maps, but the colors work equally as well under other situations.

Here is – at least theoretically – in some sense the most color blind safe 7-color set that is forced to include black and white, in no particular order: 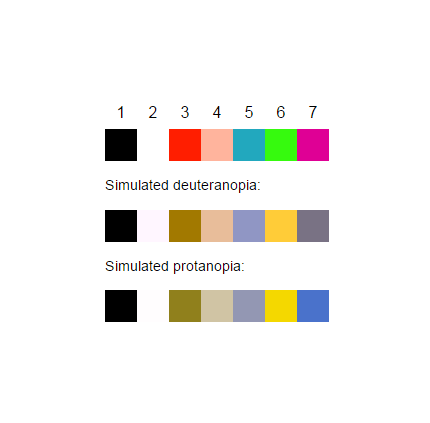 It is pretty much the same as a larger 16-color set I made but modified according to feedback from 7 persons with deuteranomaly and 2 persons with protanomaly. It is the maximum minimum CIEDE2000 color difference (14.8) solution in sRGB for normal vision and for simulated deuteranopia and protanopia, with 25 % white mixed into 75 % color in linear intensity scale to simulate small markers and thin lines on a white background. In HTML notation the colors are:

or as floating point numbers as they were optimized by Differential Evolution:

These are quite usual colors, but for a reason. I do not know how much printing in CMYK deteriorates the set. A number of color blind people commented that there should be a double code, for example with shape, texture, or literal, in addition to color. This would also help people with achromatopsia (total color blindness). I considered making sure that the colors look the same in grayscale, but unless the colors were actually shades of gray it would probably not work for all forms of achromatopsia if the affected people have varying sensitivies for red, green, and blue.

I know you said you've used Color Brewer before, but you might also consider downloading Color Oracle. It's a program that was developed by Bernhard Jenny and Nathaniel Vaughn Kelso, both of whom are rockstars in the Cartography world.

Generally for articles, the accepted convention for any kind of graphic or table is black and white.

Not the answer you're looking for? Browse other questions tagged accessibility info-visualisation color-blindness or ask your own question.

5
Traffic light like indicator for color-blind users?
6
What are HTML colors that could be used for a 4 level performance measurement (Poor, OK, Good, Great) that would work with color blind people?
5
How should you create simple, color-coded graphics for color-blind people when the graphics are particularly thin?
14
Alert colors are really user-friendly to color-blind users?
1
How can I find a color scheme that is appropriate for color blind persons?
0
Looking for Friendly Documentation on Color Contrast and Readability
3
should buttons that look like links have the exact same keyboard accessibility?