The width and height fields are read-only and display the current dimensions of the elements bounding box, i.e. for a square rotated by 45 degrees it will show different values than for the same object rotated by 0 degrees.

For some objects - rectangles for example - users can specify the width and height parameters in dedicated text boxes.

These are always the actual heights and widths regardless of the current rotation of the object.

This is roughly how the UI will look like:

I've been fiddling with this issue for quite a while now but could not come up with a satisfying alternative..

Any advice on how to design this user interaction less confusing for the user is much appreciated!

You're right that there isn't a great mapping between the input boxes and the shape on screen.

But, I would guess that other UX priorities dominate the layout issue here because:

So, even though it appears to violate good mapping design, it may actually be good UX design to scale down the dimensions controls so they are readily discoverable if users need them, but otherwise fit nicely onto the bottom part of a sidebar, or horizontally (as in photoshop) across a toolbar. For example:

This lacks the intuitiveness of a better mapped control, but could be totally appropriate because it occupies small space and draws minimal attention, which is perfectly proportional to its rare use.

I've consolidated the width/height into a 2 input boxes instead of 4, where the input is read-only if the rectangle can't be edited (I'm not sure why you had 2 separate sets for output and for input, but obviously you could leave it that way too).

BTW, if you really want to spend the space and time on a mapped control, the following one from Chrome's CSS browser is thoughtfully laid out for describing different dimensions for an HTML box.....it would be easily adapted to a mapped control for a PowerPoint rectangle or text box: 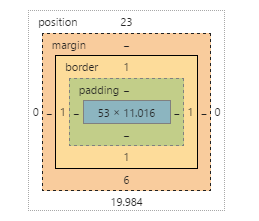 Not the answer you're looking for? Browse other questions tagged gui-design interface or ask your own question.

0
How to present multiple options
0
Should I present a menu option that shows capabilities for a mode the user is not in?
3
UI for AND, OR and NOT query combinations
1
Graphical alternatives to mini-language to operate on large sets
4
What's the best way to layout an application for building lists of objects?
2
One tablet app, one flow with two users (specialist and customer) - how to differentiate?
13
How to represent an abstract data type in a form?
0
Better 2D UI control for Yaw, Pitch Roll in 3d objects (transform)
1
How to take rules as inputs from user?
2
Which is the better way to rotate an object?