How should inline up and down button affect the selected row in a table?

In this table there is an up and down button per row.

If the user press up for the second row, should the third one keep the selection or the selection should me changed to the first (previously second) row? 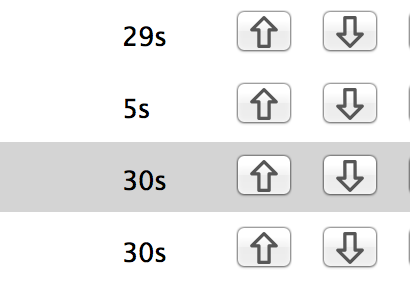 The one that is originally selected should hold that selection. For example, if the user hits up twice the highlighted '30s' should be at the top of the list. The selection should be based on the items, not the row.

Typically a user will pick a row based on its contents, not on its current relative position (as in "I want the row labelled 'Bob' or '30s' I could care less if it's the 3rd or the 17th").

So in your example, you have two different interactions:

My initial feeling is that the act of reordering a row may select that row as the current selection; but this is highly dependent on the context and actions being performed (which you didn't say).

Here's a way to look at it: Instead of using up/down buttons, if you were to implement re-ordering using a drag-and-drop handle as pictured below, would the act of clicking on that handle (in order to move it) set the current selection to that row?

Note that it doesn't satisfy the following:

The reason you don't allow reordering is that reordering involves moving things more than one row up and down.

Although it really depends what users really trying to achieve, I suspect that selecting something and reordering would, for most tasks at least, not involve coupling - they each action for a distinct task.

It's not stated in the question, but I would assume that whatever row is moved up or down in the list order still keeps, or tries to keep, its physical position on the screen, under the pointer/finger (while all other rows move down or up to accommodate it), so the button would be easy to use multiple times.

In that case, selecting the row that gets moved is not only simpler and more common, it also avoids the situation that the other row that is staying selected gets scrolled out of the visible portion of the list.

The only potential argument I could see for not updating the selection would be if it would be very disruptive to some concurrent activity, e.g. reordering a playlist while listening to the highlighted song.

From the UI is is not clear how the row is selected. A click anywhere in the row (including the arrow) is just simpler to deal with (in my mind).

Another problem is up on the top item. If the selected item is the last and arrow does not select then both the last arrow click item and selected item will not be on the same view.

Arrow cause selection and selected item always in view is the least confusing. In my mind.

Not the answer you're looking for? Browse other questions tagged tables or ask your own question.

2
iPhone button on screen with table view: last row or outside table?
2
About the creation and management of items
8
How to load data into a table based on the selection in a tree?
4
iOS: table view “Close”, “Edit” and “+” button placement in a navigation bar
6
Inline table edits: how to make it quick to edit?
2
Should the row numbering of a table update if a row gets removed?
5
How to handle a data table with row selection and infinite scroll?
3
Creating a new row above or below a selected table row
1
Should previously selected rows of a table (via row checkboxes) be retained when the user uses a search box to search for a table entry?
3
How to show selected items in a paginated table?