What is the most dyslexia friendly colour combination

Following on from this question I asked a while ago:

What is the most dyslexia friendly font?

Again, easily would be defined as quick to interpret, as in fast to read and understand and real evidence is prefered.

While contrast can be provided by black text on a white background this is not so beneficial when considering Dyslexia. Research suggests that pastel backgrounds, increased line-spacing, font choice and paragraph justification all have an effect.

Below is an example : Dark blue text on pale cream

Optimal colors to improve readability for people with dyslexia

A study contributed to the W3C looked specifically at text and background colour combinations with the aim of improving readability for people who suffer from dyslexia. the study focused on:

performance and preferences, among the different color values across people with and without dyslexia

source: Optimal colors to improve readability for people with dyslexia 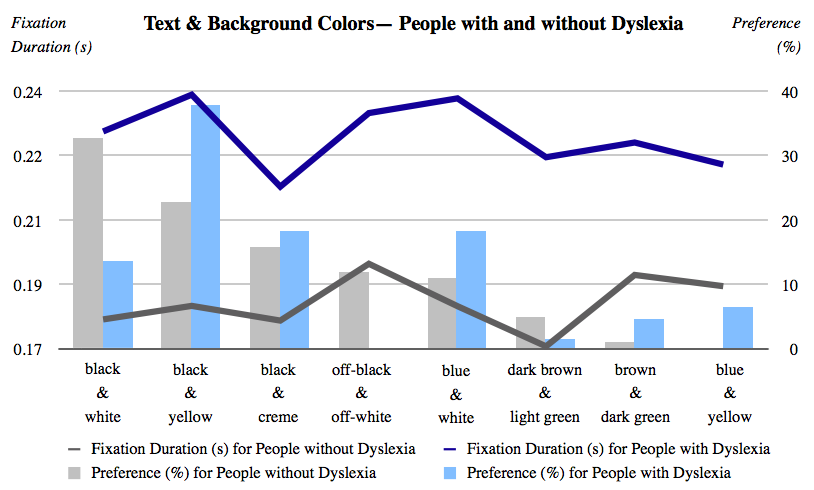 In terms of outcome, the study suggests that dyslexic users read faster and more easily when colour pairs have lower contrast levels.

There is also this piece entitled "Designing for Dyslexics" which could prove useful.The soultion discussed also evolves around creating a lower contrast scheme to cater for users suffering from dyslexia.

It would appear that there have been a number of studies done on this topic. Like this one that shows courier had the lowest amount of fixed duration. Meaning it took the test caused test subjects the least amount of difficulty. The article does go on to say that Arial and Veranda will work as well. The article also notes that when using type for a dyslexic reader italics are a no-no.

There is also this site that breaks down the challenges dyslexic users face and step one can take to select a font that compensates. The site is also kind enough to share both free and paid fonts that are designed with dyslexic reader in mind.

There are quite a few other sites that mention a study of dyslexia and type faces, however, they all refer back to the Spanish study of 2013 previously referred to in this answer. This leads me to believe that this study is probably the foremost resource on the matter.

44
What is the most dyslexia friendly font?
3
Looking for research regarding pure black vs dark gray for readability

82
What is the best color combination for on screen reading?
4
Dyslexia friendly colors for wider audience?
14
What is a good color combination, visibility for outside use
6
What is the validity of contrast and colours tests?
0
How to test for the best colour of an online store?
7
Is a colour contrast compliant if it passes WCAG but fails the earlier W3C test used on Snook.ca?
44
What is the most dyslexia friendly font?
1
What do numbers mean in a colour palette?
3
How should dyslexia-friendly headings, sub-headings, paragraphs and button texts took like?