I've been contemplating the idea of increasing UX for mobile touch screen phone users by programming a keyboard to avoid typos when touches fall in-between keys by guessing the key that the user most likely meant to touch.

For example, the user types technic followed by an o - well based on the keys near o, on my keyboard i, p, and l, we can deduce that the user is almost certainly intending to type an i towards technician (since the a in technical - another candidate - is no where near the o on this keyboard) - thus by, in that moment, inputting an i for the user, we can successfully improve his/her experience by avoiding the typo.

This theoretical functionality would be disabled for the following word after a backspace was made in case by chance the functionality caused the typo that was backspaced.

Thinking about this, I began wondering:

Is this already an industry standard for user experience in touch-screen mobile phones? Or is it standard to simply calculate based on the center of the touch?

I ask because this is a complex UX feature that would take lots of time to develop - I might pass it up in a project - but if it's a standard, then I would think twice since users might be used to this and have a worse-than-usual experience purely for the lack of a feature that they didn't know they'd been using.

I'm not sure it is a standard per-se, but it is certainly very common. It's commonly known as "auto correct" but is really just a form of error correction algorithm.

To illustrate the extent of what's happening, there are keyboards that take this much farther than merely looking at what keys you're pressing, and actually allow you to draw words:

This technology is credited as being created by Cliff Kushler who formed Swype Inc. It's since been copied/licensed (I'm not sure which) and is available in keyboards by other developers including default keyboards at least both Google and Samsung have shipped with Android phones.

This works using a number of factors, including:

This can even detect words with double letters like "food", though you can loop the letter to make it even clearer: 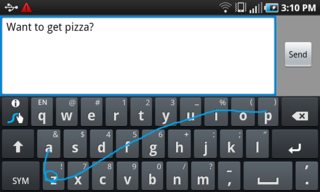 I've personally been using this type of keyboard for the last several years, and have found the technology to be quite impressive, and it didn't take long to be effective at it (though I'm not as fast as I am on a real full-size keyboard).

So if you consider the technology necessary to make drawing out words possible, you can imagine that when you actually type individual letters (or at least close to them) the problem is simpler: there are less possibilities to consider you might have typed because you didn't touch every key between "i" and "z" (while typing pizza) like you do when swiping/drawing.

And they are not "guessing" so much as using error correction algorithms based on statistical analysis, dictionary lookups and grammatical models, and previous user input and correction behaviour.

Yes, this is already done by mobile keyboards although with varied results. The iPhone keyboards tend to do much better than Android keyboards at interpolation.

If you have an Android device I'd suggest trying out the various keyboards available (Google keyboard, swiftkey, etc) to assess how they do interpolation and word completion. I am not as up to speed on how much added intelligence IOS aftermarket keyboards have (eg are they just skins or do they attempt by intelligent completion).

Then you can decide whether you think you can so better. Btw this isn't an easy problem to solve... I still haven't found a keyboard I like. So I would applaud your attempt to develop something better!

Not the answer you're looking for? Browse other questions tagged touch-screen keyboard or ask your own question.

2
Responsive Layouts: Can they respond to *on-screen* keyboards? (i.e. Tablet / Mobile keyboards)
7
Should touch image sliders in mobile devices avoid scrolling on touch event?
11
Why do keyboard keys have (most) letters in top left corner?
7
Why do some keyboards extend the Return key up into the backslash?
8
Why Greek letter mu (μ) on European keyboards?
7
Why is there no standard layout for computer keyboards?
8
UI button labeling in touch/mobile web and native apps
1
Support of keyboard in application designed primarily for tablets