Which direction should the title text rotate after collapsing a panel? [duplicate]

I recently built a filter panel similar to the one left of Amazon.com search results. 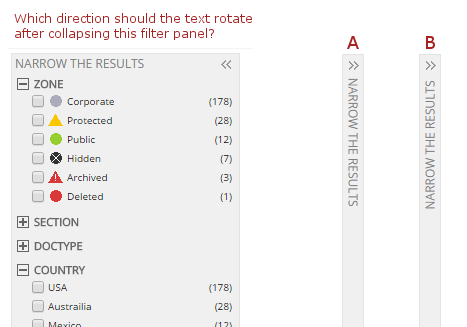 I felt that the first letter of the title should basically remain in the same place as a user clicks to expand / collapse the panel so I went with option A but another developer thinks option B looks better.

I can't find anything official so I thought I'd ask here.

After collapsing a panel should the title read down, up or not matter either way?

In general vertical text is best avoided, but in cases where it's the most viable option, the text should read from bottom to top. This is most commonly seen in feedback buttons:

The reason for this is often debated, but in my opinion it has clearly been shown that counter-clockwise (CCW) rotated text is easier to read that clockwise rotated text (CW). My simply explantation is that it's to maintain the left-right, and top-down consistency in reading. With the text flowing as in the example above, the top of the text is on the far left, which feels more natural than the alternative (at least for left-to-right languages).

Top to bottom ensures that the first word is visible

Below is one example from Microsoft Visual Studio.

A user may have many of these dockable frames and by making the text of collapsed panels read from top to bottom it ensures that the first word of long titles is visible up top even if the rest of the title is truncated. The beginning of the title could also be shown going from bottom to top but in the case of truncation this would put the ellipse ... up top making it more prominent.

Not the answer you're looking for? Browse other questions tagged user-expectation or ask your own question.

73
Is clockwise or counter-clockwise rotated text easier to read?

9
Which page should we go to after results are deleted?
42
Should I empty the wrongly filled fields or leave as user has filled after validation message?
1
Which page should I redirect to after item edit/creation?
6
What is the minimum waiting time after when should a page loader be displayed to the user?
0
Online consultation: Should notes be ready right after the consultation?
3
Should the search-box that was used to search for a user hold it's search results upon return to address book after editing a user?
1
Having a preview next to text editor, should it be on the left or right side?
1
What is the best practise for a Search button state - should we always keep search button active or make it active after user inputs?