How to make a marketplace multi languge support?

How to make a marketplace with buyers and suppliers multilingual? Because if someone writes product details with their language then how can another user in another country see the text in their native language.

There are translation tools (API’s) that can be implemented in websites and applications, but I recommend not to rely too much on them.

You shouldn't translate the text automatically for users but leave it as an option. It’s possible a non-English person can still read English, and the message is almost certainly better communicated in it's original form. Automatic translation tools like Google Translate are a disaster to UX. Text get translated into something that doesn’t communicate the message anymore. They mess up grammar, mis-interpret the meaning of words or complete sentences. Leave it as an option to the user as a last resort.

Also Google Translate isn’t the only translator to look into:

A comparison table on Wikipedia

You get better results when you let it translate by people. A way to do this is to reduce the amount of supported languages in a way it will still reach most of the users. For example English and Spanish are in the western world the most spoken languages and you can get the English text translated by a small team of Spanish students. This is just an example and there are other/better ways to reduce costs but for a marketplace with an unknown amount of data it will be an impossible job. Instead, stick with automation or no translation at all.

This has been well implemented on a few sites by showing the original text, and the offering a button to translate the text with a well chosen icon (typically a globe). Once translated, there should be a button to "untranslate" the text as well. Here's an example of the buttons:

This usually is done using the Google Translate API, but I'm sure there are also other services for this.

Alternatively you can spend millions on having all the text professionally translated into all the languages that you support, but I'm going to guess that you have better things to do with the millions. Rather use Google translate and donate the millions to Doctors Without Borders.

A good example could be taken from Aliexpress.com, which sells and ships worldwide. They do use Google translator to translate the whole page.

I don't know any better solution to reach all languages. 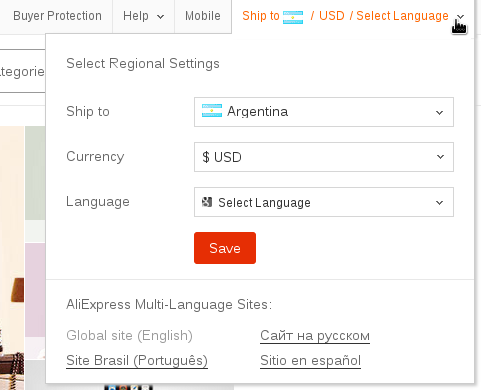 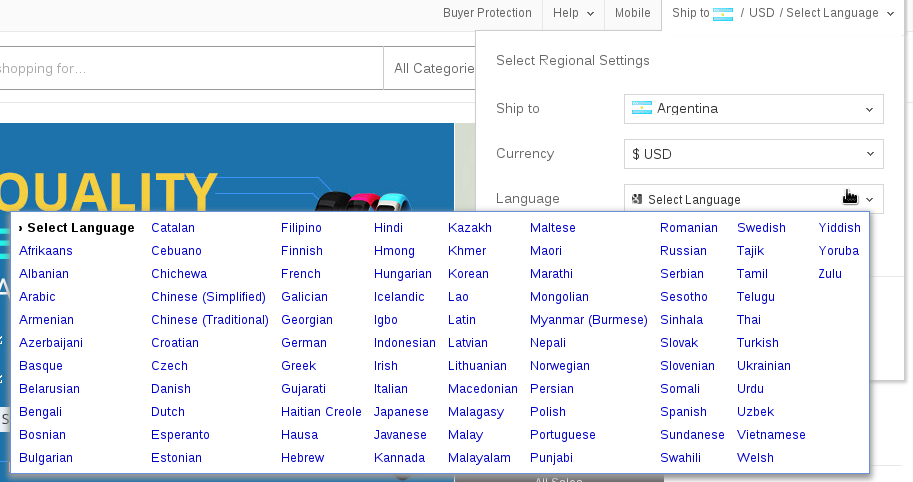 If you support multiple currencies on your site, then use a drop down to enable shoppers to select the currency and/or the country. Ensure the option to choose the currency/country is highly prominent. If you can automatically detect the geographic location of the shopper, then set the default currency/country based on the location.

Since automatic country selection is not always accurate, you can also ask the users to choose the country when they first enter the site and allow them to change it any time.

If your store is localized in 2 or 3 languages, then list them using the language’s own name itself across the website header so that the user can toggle between them.

If yours is a multilingual store, then use a drop down language selector that lists all the languages in alphabetical order.

Not the answer you're looking for? Browse other questions tagged web-app internationalisation or ask your own question.

12
What's a good alternative to flags for depicting internationalisation as an option?
6
Mixing languages on a blog : cute or worst idea ever?
3
Providing multi-language descriptons
5
What is the best mechanism for language and country selection?
10
Is it good to change keyboard's input language automatically in JavaScript?
1
What to use as a textual link to a page showing a list of available languages?
4
Why is sites i18n often based on the users country and not the preferred language in the browser?
3
How to deal with official country names which aren't understood by users?
3
Internationalization - how to handle situation where landing url implies different language than previously chosen settings