What's the clearest way to visually show greater or less than

I am designing a UI to allow users to set time-based goals.

What is more recognizable, why:

This is tabular layout so saving space, consistent alignment and reducing redundancy are important.

1. Leave it off altogether

Unless the directional info is important consider leaving it off. Google maps does this in their voice directions algorithm. When you need to turn in 1.6 kilometers it doesn't say in less than 2 kilometers or in a little over 1 kilometer. It simply says, in 2 kilometers. So far, not knowing the exact distance to the turn hasn't made me miss anymore than just being a bad driver has.

In your specific "Goal" example I would simply put 5h instead of >5. The fact that someone can go beyond their goal's target should be obvious enough to leave the symbol off.

If you feel the need to emphasize that goals are a minimum that can safely be exceeded then try saying that in a single place below the table.

Exceeding the minimum number of hours set as your target Goal is encouraged and might possibly earn you the title of Ninja among your peers!

2. Choose an option which places the number in front

With only a single number as a reference point then all of the suggestions in the question are valid but some are better than others for the simple reason that the most critical information is the very first character:

this is good because the 5 is first

this is not as good

When people see 9+ or 99+ in a badge icon they can usually infer that the UI is trying to save space by handling all possible cases in 2 or 3 digits.

For example, when showing the number of appointments scheduled today 9 could be a reasonable maximum but 99 is probably a safer choice. Not many people will have 99 appointments in one day so 99+ is okay to show to handle the few special cases.

Why not write it out in words? It's not much longer, there's no room for misinterpretation, and you're not requiring the user to interpret what you mean.

For example, if you question is "How long will this task take you?" Your option to the user would be "more than 5 hours"

Each of the examples you've given could be considered more recognizable depending on the scenario:

a) This indicates a relation between 2 numbers - x is greater than 5. Although it's similar to option d) in it's meaning you haven't provided x which makes it a little ambiguous. I'd also suggest that it's less easily read by users who are not used to reading math notation.

b and c) Are commonly used to denote an increase from x to the current value. For example if your initial estimate was 10hrs, this would denote a total of 15hrs

d) As mentioned above, is similar to a), but being more semantic I'd suggest it's easier to read, there is no missing x here either. However, if you're putting this in a table, repeating 'or more' in lots of rows could clutter the data you're presenting.

If you can provide a bit more context it'll be easier to give a more definite answer. 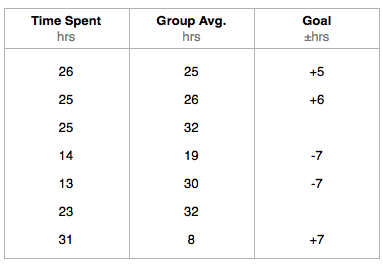 Colour coding the Goal with (for example) red or green to show a positive or negative connotation would make it even clearer. (Maybe that's what the green circles are in your image?)

Perhaps this order of columns is clearer if you're comparing actual time to Group Average (Benchmark)?

I'm assuming you are wanting to refer to "greater than or equal to"?

So from the get go, we can rule out >5 and "greater than 5 hours", for being factually incorrect.

We can rule out +5h, because that has an existing definition, to mean, 'add 5 hours', as in GMT+5

Three answers: >=5h, 5h+ and "greater than or equal to 5 hours" are objectively correct.

5h+ jumps out as being the shortest and the clearest there.

Not the answer you're looking for? Browse other questions tagged design symbols or ask your own question.

14
What is the difference between a Hi-Fidelity Prototype and a visual design?
1
Solving category display issue
1
Is my needfinding observation plan methodologically sound?
5
Are design frameworks, design guidelines and design languages essential for UX design work? If not, what is used instead?
1
What's the best UI Element / something new for a single select list where at least 10 options must remain visible?
22
Do product-based sites NEED review capability?
4
Should I tell what the function is or not?
1
What's concretely the designer's mental model?
1
UI Approach to Question/Reply Table
21
What is the clearest way to display "less than"?