Airlines use differently sized seats and arrange them at different distances, of course, even if we look just at Economy class, but since windows are so small – probably due to technical constraints – there are always more of them than rows of seats. For many a passenger it is a joyful experience to sit next to a window and look outside (when it is not too cloudy).

To enhance the user experience, would it make sense to have exactly one well positioned and well sized window per row?

PS: I tagged this question with cars, because it applies to busses and trains, too, although there windows are much larger often the spaces in between them block the view from some seats.

To expand a bit on jamesqf's answer, while the airlines decide much of the interior layout, window placement is driven by structural elements of the aircraft. An airliner fuselage has a series of circular frames, and windows go in the gaps between these frames: 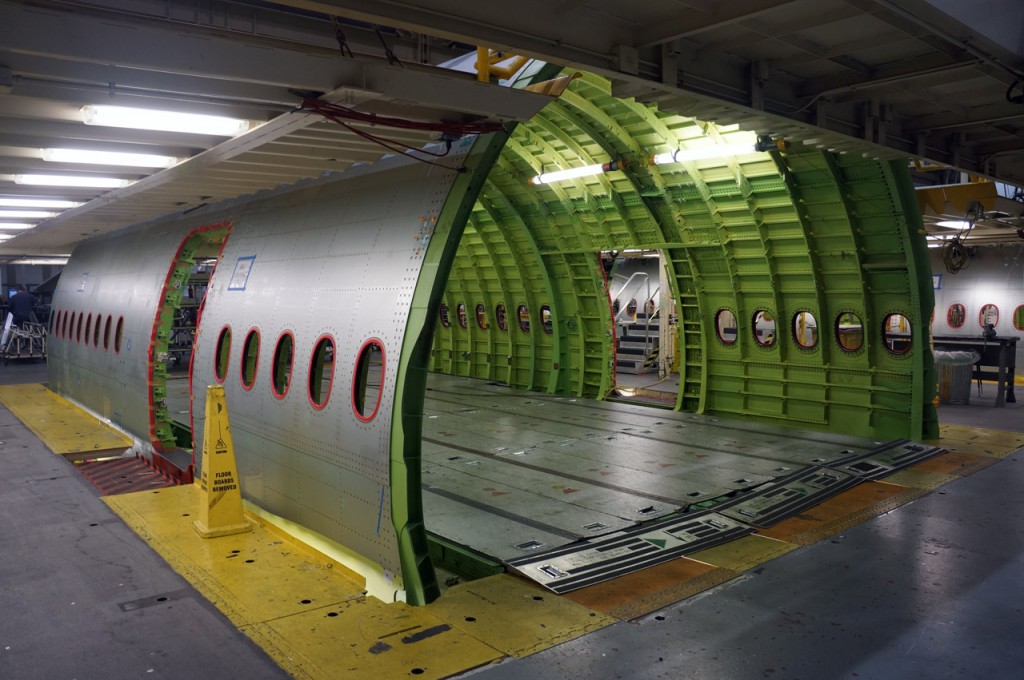 You can't really change the window alignment without changing frame spacing, and doing that is a major airframe modification that requires regulatory approval. So long as airliners are built with this basic structure, you cannot easily change window spacing on the same type. Furthermore, structural demands dictate that window spacing is going to be completely uniform, like the frame -- even if airliners came from the factory with a fixed seat layout, you'd have trouble aligning all the rows of a multi-class cabin (your business/first class would need seat spacing to be an integer multiple of the spacing in economy). It's not just that you can't change windows when you change seating, it's that window spacing basically must be identical and uniform on all aircraft of a type.

While it may not be great for UX to have misaligned windows if all else were equal, it's the natural result of this structural design dictating uniform window spacing and other concerns (e.g. fitting as many people as possible, having more legroom in some seats without having to give them too much more) dictating non-uniform seat spacing. You could align them if you have few seats and can align seats to windows, but that leads to inefficient use of space in the plane.

The problem is that seat layouts are something that is decided by the airlines, not the aircraft manufacturer. There are a large number of possible seat layouts for any particular model, for instance http://www.airbus.com/aircraftfamilies/passengeraircraft/a330family/a330-300/cabin-layout/ In addition, seat layouts for any particular plane might be reconfigured several times over its operating life. So to get one window per seat, you'd have to build the planes with reconfigurable windows.

Then too, it seems that the great majority of people would rather watch movies or TV reruns than look outside :-(

would it make sense to have exactly one well positioned and well sized window per row?

That depends on what "well-sized" means. If it is just large enough so several people could theoretically look through it at a time, that might not be enough, because the window could still be blocked by the person sitting right next to it. In that respect, two small windows could even be advantageous compared to one moderately large one, as the passenger sitting next to the windows will probably look right out of the rear one (and thereby block that), while still providing a clear line of sight for the other passengers through the forward one.

Some remarks on this:

For many a passenger it is a joyful experience to sit next to a window and look outside (when it is not too cloudy).

Yes, though there are also some circumstances opposing this:

Yes. It would make sense to have exactly one well-positioned well-sized window per row.

I believe airlines should be more fully regulated because, right now, passenger experiences are abysmal. I think the airlines need to adhere to more stringent regulations that govern passenger comfort even if it drives up prices. Right now, it's like paying for torture.

Not the answer you're looking for? Browse other questions tagged cars transport aviation or ask your own question.