Why can I only close tabs to the right?

In both Chrome and Firefox I have the option the close the tabs to the right, but not to the left. Why is this? This seems like a somewhat ridiculous limitation to me. 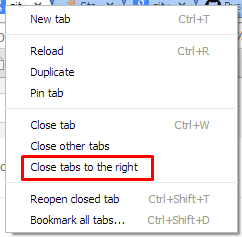 It has been discussed in the google forums but it seems that there isn't any clue about it.

The only theory I can imagine of is related to the situation when someone starts googling about an specific topic and opens a lot of tabs (which will be opened on the right), then when navigating, the result might be found in the first previously open tabs, so you wouldn't need anymore all the rest and the close tabs on the right would work for that.

It's common that the first tabs you have usually open are the ones you always use and don't want to close (e.g. email's inbox), it's something I've seen everywhere with everyone. Taking that into account the close to left could be proportionally less usable.
EDIT: user @Josiah has found that this was mentioned in the 'close tabs on the right' feature creation thread for Firefox.

It's just my theory, but maybe taking these things into account they decided to put just one of them, being the "on the right" option more usable. btw, I don't think that this is a feature frequently used by the majority of the users and there are plenty alternatives to achieve the same thing (with a little more effort though).

Btw it seems that some people fill the gap with extensions both on Chrome and Firefox.

Also you can select multiple tabs: Click in a tab -> shift+click (or ctrl+click) in other tab (which "adds" selection) and then dragging them out.

That way you can drag the ones you want to be open to a new window and close the old window or you can move them to the left and use the close all on the right.

I agree with @rewobs about the first tabs often being more important. It's not just a common observation, but actually a very reasonable occurrence, because new tabs open on the right. So if I open my "main" item (my inbox, my facebook feed, an article), and then it leads me to open a bunch of secondary items (through links in the original), the secondary items would be lined up to the right of the main one.

Also, browsers are actually tailored to make the closing of "later" tabs much easier than the closing of "earlier" tabs. If you position your mouse on the X button of a tab and you wish to close all the tabs to the right, you just keep your mouse in the exact same location and click away until you're done - you don't need to move the mouse at all, the tabs slide into place with their X buttons being in the exact same spot (which is a kind of magic, because their sizes change!). But if you wish to close earlier tabs, you always need to move your mouse to the left.

I agree with both previous answer but they've missed one pretty important point > Locked Tabs are always staying most to left. If you'd have a possibility to close tabs to the left you'd just simply always close your Pinned/Locked Tabs – which you for sure don't want to.

IMHO that's the main reason – personally I'm using locked tabs for most important things i.e. email, corporate website, to-do list application and project I'm currently working on so they're my main point of focus and I'm always closing all other tabs which are position on right side of them.

one interesting thing I've noticed is the speed in which close tabs to the right AKA CTTTR for brevity henceforth. I havent sat around and recorded the time taken to: A)Close the browser completely B)Close multiple tabs by clicking on the close button individually C)Close Tabs to the right

anecdotally it seems to work much faster and I use that tactic daily to close out my browser windows quickly using that function and then closing the last tab or exiting the browser via the program menu (in chrome /chromium: clicking the 3 parallel lines and hitting exit

anyone else agree? I'd like to take a look under the hood and see why this is but am unsure how I would go about that. (yes I know how to use google)

I recall an add-on I had for Firefox (FF) a few months ago (which was version 48 but worked more or less OK for my needs) that gave essentially full control over tab closing. It was right there, in the context menu, close tabs to the right, to the left, all but the current tab ... etc.

However, now I'm at the stage where FF48 will not support the structures of some websites I visit, so I can't go back to it anyway.

Having suddenly 'jumped' a few releases to a 65 version the now forced cessation of some very useful options in FF is blindingly obvious. We all know about the previously useful add-ons no longer working, and no replacements because they don't fit the ethos, the difficulty stopping FF from trying to upgrade itself, and the difficulty assigning a web page to new tabs if it's stored on the computer. This removal of the "Close Tabs to the Left" option is just one of the ones that have fallen by the wayside.

I understand what some have said about 'buttons next to each other' and the danger of hitting the wrong one, but... this is about context menus where "Close Tabs to the Right" is next to "Close Other Tabs". Don't you have a problem with those two being adjacent? I don't. Perhaps it's called "exercising control" or "taking a modicum of care"?

Additionally, there is a discussion about the sequence in which new tabs are opened, and the apparent notion that tabs to the left are usually ones you want to keep.

Regarding that, I have to point out the fact that any given tab in an instance of several tabs can be moved sideways to another position, e.g. I can move my leftmost tab to the middle or the right hand end, etc. So that "explanation" won't work either.

The problem isn't that we aren't allowed to even risk the possibility that we might sometimes be liable to perhaps make mistakes.

It seems to me that, as such as Microsoft and Adobe believe that "we know what the customer wants better than the customer knows", Firefox is joining the club.

Not the answer you're looking for? Browse other questions tagged user-behavior chrome firefox or ask your own question.

30
Why does Firefox remove the “close tab button” when you have more than n tabs open unless you focus on the tab?
2
Unclosable last tab in firefox. Is this a real decision?
7
Understanding the scroll bar in the Firefox 'List All Tabs' dropdown
9
Studies on the efficiency gains of Vimium-esque keyboard shortcuts
4
How to tell to the user that a web app is optimized for a specific browser?
4
Prompting users to save web app to homescreen
8
Toggle Switch position the right way?