Is the discount more important than the price?

I am working on a new app that list a lot of great deals and I was wondering what have the greater impact on user between the price and the discount.

In other words : Are users looking for a low price or an opportunity ?

There is no universal answer to this question, as which is a more important factor in a buying decision varies depending on: price; type of user; perceived quality; and type of purchase.

Based on A/B testing and discussions with other professionals, in general women tend to be more interested in the discount, and men more interested in the absolute price. It's why women's clothing stores tend to always have items on discount, and where the discount is the most visible marker. Of course there are other factors that come into play, this is just one of them.

Another is the wealth of the user. Typically poorer people will focus on the absolute price more than the discount, as their shopping is more utilitarian in nature. E.g. in the Netherlands if you want to buy beer, there is the Euroshopper beer which is about €0.30 for 450ml on one end of the scale, and craft Belgian beers at about €3.00 each sold next to each other. As people in the Netherlands have more disposable income, and are less price sensitive, they tend to buy towards the middle of the beer price scale. Whereas in places like South Africa, the price difference between common beers in a supermarket is far less and people tend to buy whatever is cheapest.

If the item is perceived as having a high quality, and something that is likely to only be bought once or a few times in a lifetime, the discount tends to matter more. You can often see this logic with men buying tools, or sound systems. I'm sure a similar thing would apply to women and high end handbags or shoes, but I thankfully have no experience with this.

With impulse buys, the discount tends to be more important, as it's what's used as justification for the purchase. This also applies to pressure situations where people don't want to lose out on an "opportunity". It's a common negotiating tactic to give a good discount, but limit it in time to create pressure. You'll often see car salesmen do this sort of thing.

Whereas a purchase where someone takes the time to research it and make their decision carefully, the final price is more significant.

So overall, you'd have to make an informed decision based on what you know about your audience and product. I would strongly suggest A/B testing to be sure, and if possible combined with some sort of user demographics.

I took a course on Coursera. Beginners Guide to Irrational Behavior by Dan Ariely. The course addressed these kind of issues. As you would guess, people are irrational.

Lets say a customer is buying a pen for $20 and you say to them, "The store down the road has the exact same pen for $10". They would be more likely to consider that a deal worth exploring and make the effort to go to that store and buy the pen there.

If the exact same person were buying a $800 television and you told them the same thing. "The store down the road is selling that TV at $790", they would see the same saving in a different light and not bother to save $10. The discount on the TV is perceived as less significant even though the amount is the same.

To answer your question: I believe the discount compared to the price is the draw. Naturally, this kind of experimentation would best be conducted in highly controlled experiments since its a direct effect on the bottom line.

I can't find his specific study, but here is a list of his research. Good nerd reading.

I agree with others that there are just too many variables (a good portion were exposed) to make a decision without A/B testing.

BTW, I think the image of the OP seems to be reducing the chances to a false dichotomy where one or the other (price or discount) must be the one "highlighted" in the final design, when in deed they could both have their distinctive place and presence in a balanced way, with the chance of getting the "attention benefits" for both the customers who are discount or final price seekers.

Here just an fast example to illustrate the idea of the last paragraph. 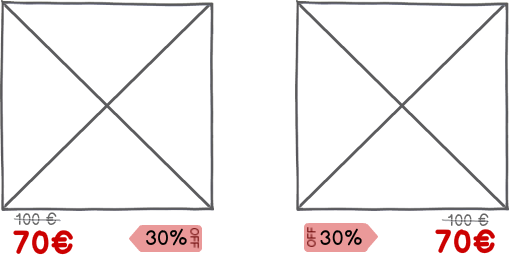 I don't think there's a perfect answer here but I know I lean towards Option A.

Obviously every store is different so not all these apply in every scenario.

Marketing Answer: The discount is most important!

UX Answer: The actual price is most important!

You could do some A/B testing to determine which approach is best but, as some other answers suggest, there may be no one size fits all solution.

If you could start by randomly varying which number is given prominence and track how individual customers respond to this (i.e. are they clicking on more products with big discounts, or going for lower prices), you could build up a profile and personalize what users see based on what they are more interested in / respond better to.

You could also try explicitly allowing users to filter products on the magnitude of the discount as well as price.

It depends on your price bracket and customer type.

If the product is already cheap (like a 50p pencil down 10% to 45p), then the price is more important.

If the product is expensive, or an investment purchase (like a £1500 handbag down 10% to £1350), then the discount is more important than the price.

You'll need to factor in your audience and product type into your UX decisions.

There are many factors that go into marketing a product for sale. A key factor is the environment the buyer is operating in. If I am physically in a store and I see an item with a steep discount it may trigger an impulse buy, so discount might be the most important factor.

However, that is not your environment. A user willing and able to run your app to see this item, is very likely willing and able to check this item at other retailers, through your app or another. At that point, I believe they are going to care more about the bottom line price/value and not the discount.

There are 3 Type of buyer in World, One, Who want good quality product who never compromise with price for good product, Second are who find products that may comes handy in their budgets. So some time they compromise with product quality. And Third type are who, want product for their fond of and change that product frequently. So they found low price and of course with discount product.

And Yes, Discount is effect on all those type of buyers, So you need to display it wisely. If discounts' label are every where in your project, then it may negatively affect on your project.

Think like buyer, If you visit ecommerce website, and show offers every where than what you think?

There are two possibilities there.

Display discount is good but its depend that how you manage it in your UI.

You can set sorting like others that sort by price, discount etc...

I agree with one of the comments - if you can set your max visibility item to be the thing they sorted or searched by then you have the best of all possible worlds.

Making the things visually different is good, too - have one in bold, another in a larger font, so that they all stand out, and their eyes - or rather, their mental filter of "what I'm searching for" can most quickly gravitate to the things they most want to see.

When someone's shopping, they're in hunter/gatherer mode, searching for those ripe fruit, or that twitch of movement that gets them their prey. You just want to make it easy for them to hunt.

If people were rational, they would disregard the discount and look only at the final price. But people aren't rational. Retailers have figured out that if store A advertises a product for $20, and store B advertises the same product as "regularly $40, today only 25% off", people will buy from store B to get the big discount, even though the final price is higher than store A. I don't have citations to any studies on this handy but I've seen them, and you need only look at store displays to see that many, many stores follow this strategy.

The store where I usually buy clothes always has everything on sale. Absolutely nothing is sold at a regular price, everything is always "50% off!". 50% off what? I presume 50% off double the price that they sell it for every day.

Absolutely true story: Once my wife told me that she was going shopping that day and had seen a sale on men's dress shirts and would I like her to pick me up a couple? I said sure. When I got home she had bought me two shirts. I tried them on and, unfortunately, they didn't fit. So I said to her, "Oh, didn't you know my size?" "Yes", she replied, "But the ones in your size weren't on sale."

This book contains examples which relate:

Predictably Irrational: The Hidden Forces That Shape Our Decisions is a 2008 book by Dan Ariely, in which he challenges readers' assumptions about making decisions based on rational thought.

There are handy chapter summaries on the Wiki Link,

Chapter 2: "The Fallacy of Supply and Demand" relates to the question

When consumers buy a product at a certain price, they become "anchored" to that price, i.e. they associate the initial price with the same product over a period of time. An anchor price of a certain object, say a plasma television, will affect the way they perceive the value of all plasma televisions hence forth. Other prices will seem low or high in relation to the original anchor. In other words, decisions about future LCD television purchases become coherent after an initial price has been established in the consumer's mind

PS Edited in response to comment- I will try to find the book and actually quote from it rather than Wikipedia !

Another way to handle this issue is to add discount percentage as a ribbon on image. This will keep consistency and will be easily seen by all visitors.

Not the answer you're looking for? Browse other questions tagged user-behavior e-commerce discount or ask your own question.

3
Is it better to display featured products as a slideshow or as a list of products
6
What is a best practice for branch/leaf creation?
8
Showing the user the hierarchy of inputs in a form
31
Is it better to include shipping cost in the product price?
9
Is there any research on how users scan Pinterest or Trello style pages?
1
What is the default sorting for customer reviews on e-commerce website?
4
How can I encourage my users to use the "Login with Google" button?
2
Mobile friendly price slider
4
Is it good to have multiple steps in pop up?
7
Placement of primary button in pop up