I'm building a similar date picker option to the Mailbox one. I'm arguing with friends about their UX logic for returning from screenshot two to screenshot one.

This is their main date picker screen: 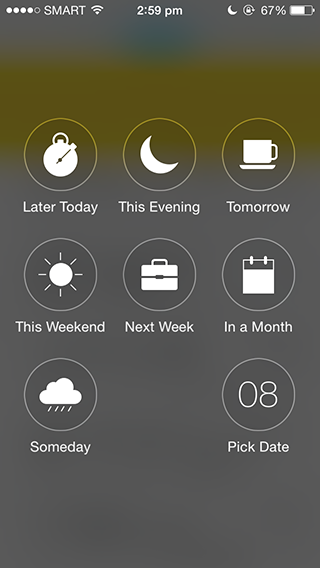 After selecting the "Pick Date" option, you are presented with this screen: 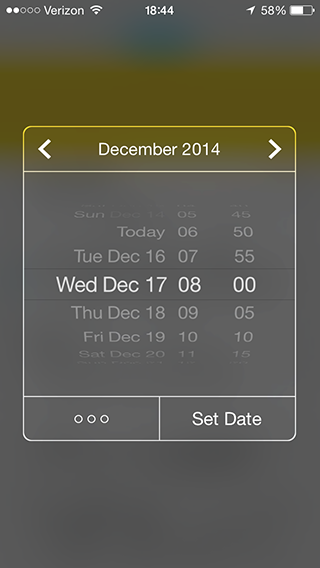 I have a problem with understanding how a three dot option here is actually a back button that leads to the previous screen. I understand that users would understand it after they tap on it, but it just doesn't feel intuitive.

So, my question is, should there be only one button on the bottom saying: "Set Date" while having an X in top right or back button in standard iOS position on top left or just having the tap outside the date picker pop the view and take you back to the first screen of picking a date? Mailbox's default behaviour for tapping outside date picker options is cancelling the reminder and going back to inbox. Another option could be writing "Back" or "Cancel" instead of having those three dots button.

What do you think? Thanks ;)

It's essentially an iconised version of an ellipsis - i.e. an indication that something is intentionally omitted, perhaps due to lack of space or for the reader to use their imagination. It's used when the intent is clear but the words do not need to be said.

Three dots does not clearly mean Cancel, Back or anything similar, and the usage above is poor in my opinion. There's plenty of room for the word cancel so I would prefer the button to say what it means.

There would be no harm in having the X in a standard position for those that expect it on a particular OS, and tapping outside should also have the same effect, as this would be expected behaviour for some and introduces no visual clutter.

As to whether the touch outside the box goes back one step or more, it would seem that in your scenario it should go back to the previous screen where you have alternate ways to pick the date, rather than cancelling the whole process.

I do somehow feel though that there must have been more to this than meets the eye. I'd like to know what was being thought at the time the 3 dots were implemented.

There must have been some rationale...

Oh hang on - I get it! The three dots are being used to show more options! It's just that those options just happen to be all the options that were on the previous screen! But when you tap it, it feels like the button is doing a cancel. That's just confusing labeling for the navigation paths you have here.

Cancel or Back will be a much clearer option if the destination page is the one you came from. Three dots (or clear equivalent wording) could sort of work if the options were on a sibling page rather than a parent page in the page hierarchy. 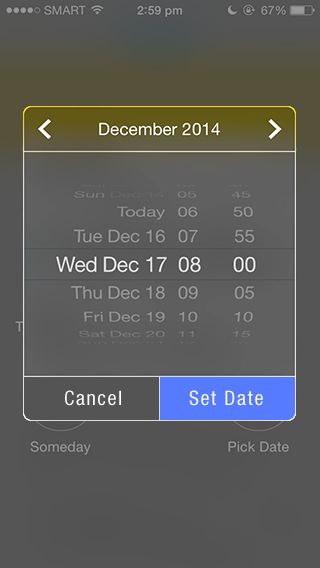 Not the answer you're looking for? Browse other questions tagged ios back-button cancel back or ask your own question.

8
Mobile App Back Button Placement
4
iPhone table view filter with multiple controls
9
Can we assume users know the devices they're working on?
1
Plain tables customization in iOS
4
Handle Push Notification when app is in foreground
2
What's a valid reason for the iOS home button going back to the last app from the task switcher?
2
Message and button labels in iOS Alert view
4
Back button or Cancel/Save when calling server is necessary
1
Is history-dependent navigation after save/cancel actions good practice?
0
iOS list with checkboxes and radio buttons alternative