Can you apply a similar UI design used on a “web” app towards a “native” (iphone, android) app?

I'm in the process of redesigning my website to be responsive, so this will also include a "mobile" web designed version of my website.

I'm just wondering, would I be able to use my "mobile" web app design and apply it towards a "native" (iphone, android) app design? Or would I have to design a whole new UI for my iphone/android app?

I think I grasped your question correctly: you want to redesign a web site, and the accompanying native app should look similar to it. You need a native app for certain features like push notifications.

By going down the native route it would require you to override the GUI controls in whatever platform and redraw these controls to look how you designed them. This can be as simple as this.button.ForeColor = Color.Red; but you would only be changing colours and not have very much control beyond the colours and font.

Redrawing is actually fairly complicated, and StackOverflow would be the better place to ask for help with that.

There is also the option of creating a web app in a native wrapper. I believe Phonegap et al can achieve this although I have no experience with them myself. As we saw with Facebook's u-turn on a HTML5-based mobile app in 2012 though - users wanted the speed and responsiveness of native.

It's worth considering also whether your users will be expecting the SAME UI on their phone as in their browser, or just one that shares the same theme. Compare the reviews for an app that is released with Google's Material design with a previous version without it. There is usually a huge difference and the users are preferring a material based app using native UI controls rather than a custom UI controls, even if they are native.

You could use your web app design in your android and iOS app quite easily. It would also provide continuity to your users, who would be able to switch from one to the other with ease. 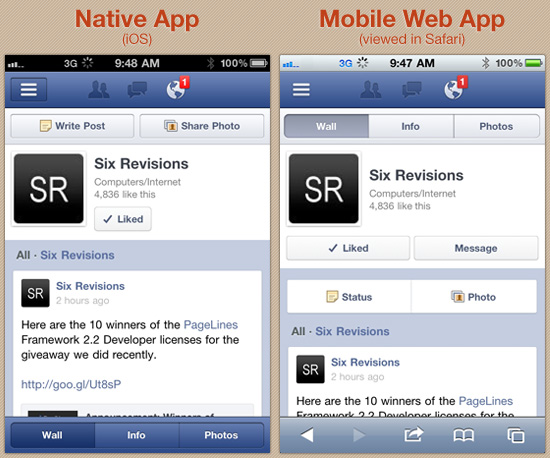 Note that this image is quite dated. With the advent of HTML5 one can create even more impressive web apps.

Not the answer you're looking for? Browse other questions tagged gui-design web-app android iphone mobile-web or ask your own question.

1
Is it good or bad to follow iPhone native look and feel in design of mobile Websites?
5
On Android, how do you design a very shallow navigation?
1
Native tablet apps or web app
6
Automatically redirecting to mobile app from home page?
7
Implementing UI Design of iOS to Android App, Good Idea?
1
Would I need a mobile website for iPhone as well as iPad?
2
With the appearance of progressive web apps, should native vs web mobile apps still have different features ?
3
Back function in (mobile) native apps vs. web apps