I am programming application that writes data about contracts into database. It is similar to banking software.

Contract is very complex data, so let me describe its structure:

It has basic info that is represented with a set of basic controls ( button, checkbox, textbox etc ).

Contract may or may not have additional complex data that describes it, in view of an annex.

Contract may or may not have additional complex data that describes it, in view of a special report.

Annex and Report have exactly the same characteristics like the original contract. They have same buttons, textboxes and so on. The only difference between Contract and these two is the fact that Contract has 2 extra textboxes, and of course, that Annex and Report are part of a Contract.

After asking for help here previously, and researching online I have decided to use master-detail interface to preserve space. That way user can both add new data or edit/delete/search/print/etc existing one.

MY EFFORTS TO SOLVE THIS

In order to present such enormous amount of data I have decided to use tab control. This solution halved the amount of occupied space.

For displaying existing data, I have decided to use treeview control because of following :

Below are the sketches of tab control when user enters contract/annex/report.

Here are the sketches of treeview for following cases: 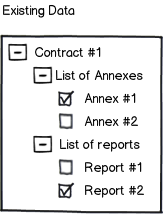 Below is the sketch of what I have "figured out" so far. 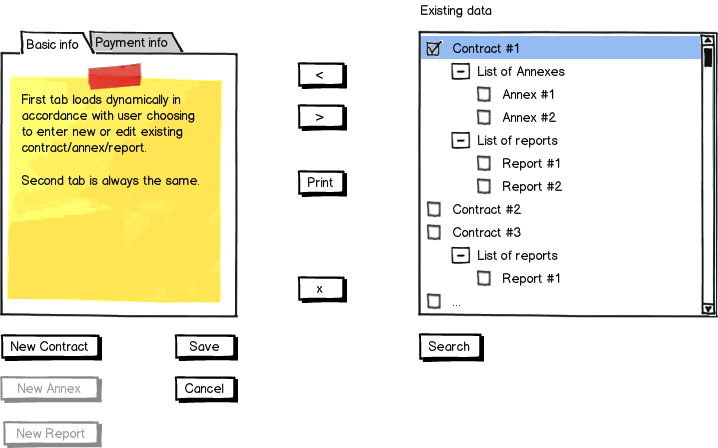 As said before, treeview represents existing data in database.

If user wants to edit contract/annex/report, he checks desired node and presss < button. This loads selected node into tab control. When finished with editing, user saves edits by pressing > button and changes are saved.

If user wants to add new annex/report to the contract, he can do so by loading existing contract into tab control ( by pressing < button ) and then pressing New Annex or New Report button ( these buttons will become enabled as soon as contract gets loaded into tab control ). Once finished with entering data for annex/report user must press save button in order to add the new entry.

New contract is added by pressing New Contract button -> tab control gets reset and cleared. Once user finishes entering data he must press save button to add the contract into database. Contract will be shown in treeview control.

If user wants to delete/print contract/annex/report, it can be done by checking desired node and pressing corresponding button.

As for search option, pressing that button will launch a dialog box where user will configure search criteria. Treeview will be repopulated with search results.

I believe my general idea is good -> use tab control for entering data, and treeview for showing existing entries. I am also satisfied with the solution for editing contract/annex/report via < and > buttons. Printing, deleting and search functions are also properly implemented in my opinion.

However, adding new entry - be that contract/annex/report - is inefficient in my opinion. The same goes for the case when user loads existing contract into tab control and tries to add new annex/report.

I believe my design is very "clumsy" and inefficient, which is the result of my inexperience.

If further info is required leave a comment and I will update my post with relevant information.

Your instincts in general are on point, but your implementation is a little bit wonky. The interface you have 1) moves from right to left (first select something from the right, then enter info on the left) and 2) requires a loading/unloading step that isn't strictly necessary.

Here how I would redo your interface: 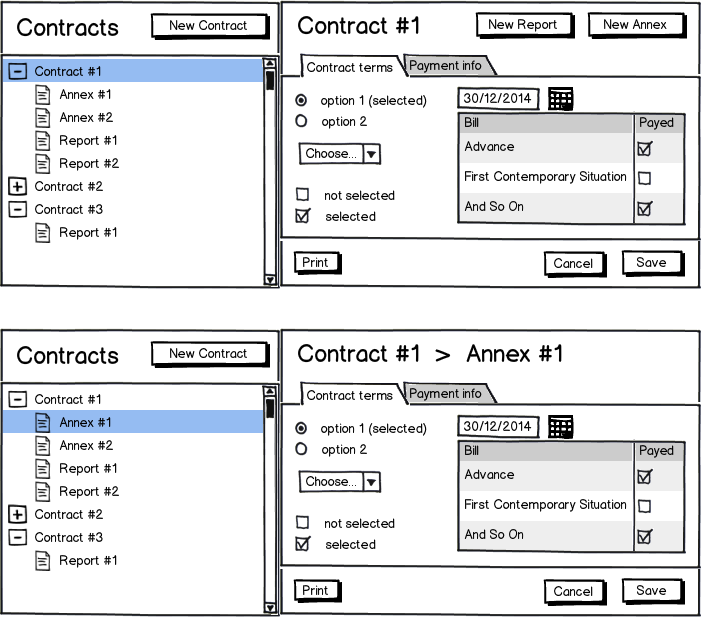 Clicking on the left loads the requested info into the right pane. Make edits, click save, done.

"New" buttons in this design are located in a contextually-appropriate spot. New Contract is a top-level addition so it lives in the master list. New Report and New Annex are specific to an individual contract, and so live within that contract's view.

The one UX path that is not reflected here is the case of the unsaved contract: what happens if a person makes changes to a contract and then clicks to a different contract or annex? In that case I would throw a popup that says "You have unsaved changes to Contract #1. Would you like to save your changes? [ YES ] [ NO ]".

5
Designing an interface that contains text fields as well as a datatable
2
Interface for managing public and private profile fields
6
master/detail view blank state/detail view when nothing is selected
1
Time-consuming "Request - response" steps in desktop application
3
Master-master / detail approach? (a.k.a, how to approach summarized data)
4
Can not reorganize large number of controls on a form , in a visually appealing and efficient way
1
Can not design window to be used both for inserting and reading data from database
2
Improve form design for more efficient editing/browsing through data
1
The most efficient solution for breaking this form into multiple tabs
1
Display hierarchy of mutually exclusive options