Dialog box on top of wizard

I have a wizard which has two tabs and in first tab I have drop down box. There are two options in the drop down.

Please suggest what is more appropriate: 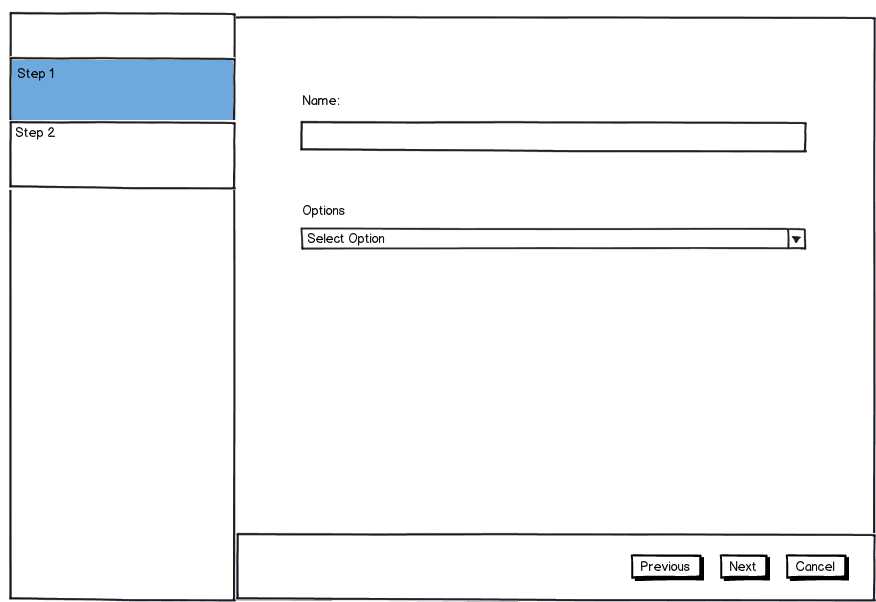 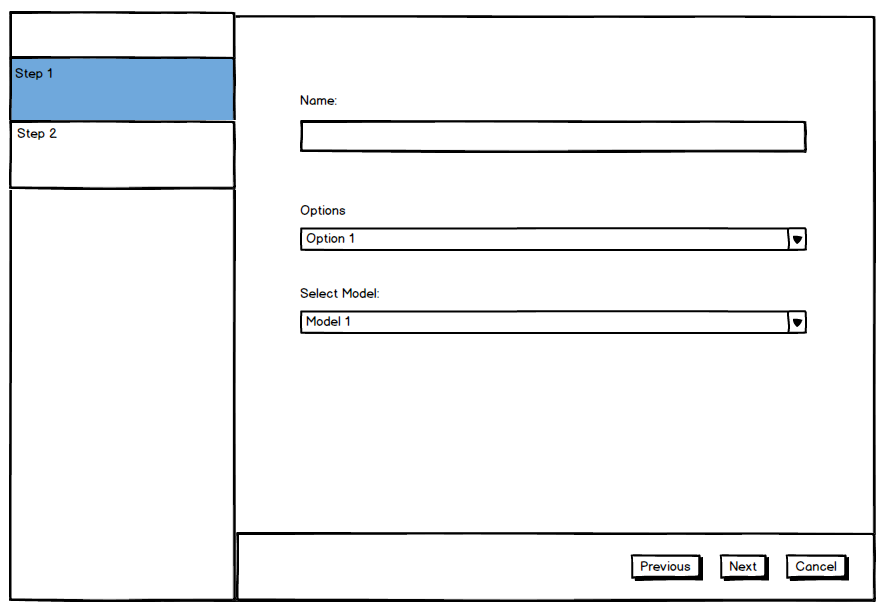 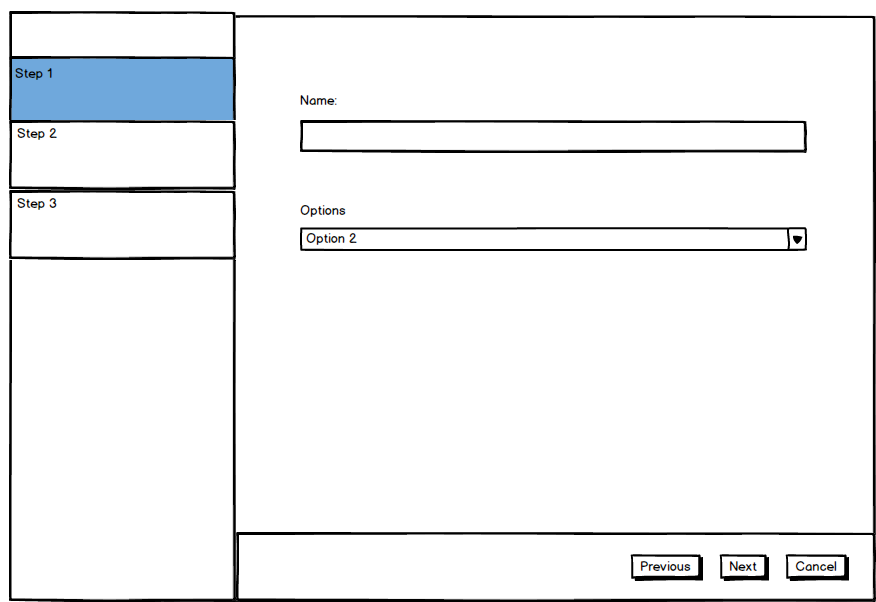 On selecting option 2 one more step is added 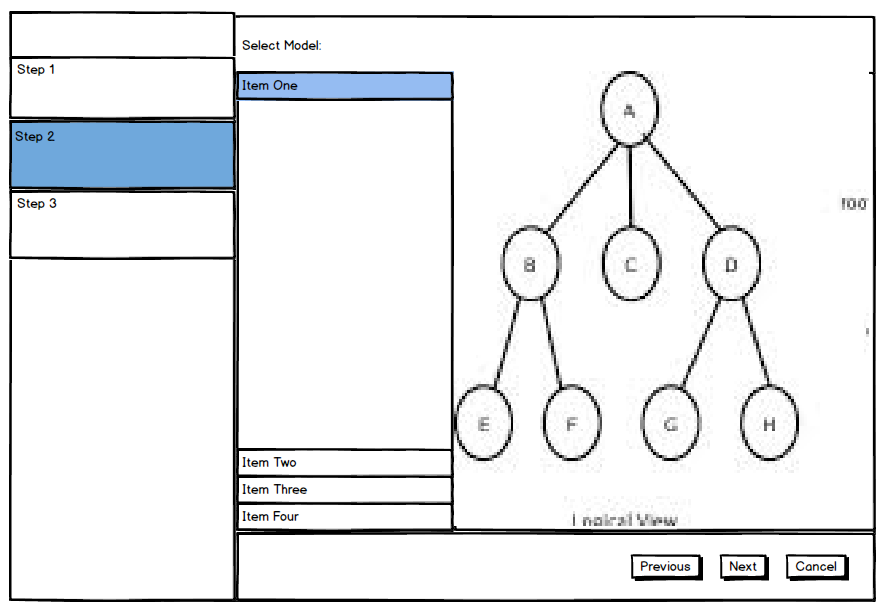 Please suggest what is the best approach to display this, need it urgently. Thanks

A wizard with tabs? Wizards and tabs should be mutually exclusive. As it says on page 179 of the Windows 7 User Experience Interaction Guidelines, you shouldn’t use tabs if the controls on one tab are dependent on the settings of another. The user should have one decision for each page of a wizard –there never should be so many controls that you need tabs.

Variable Paths with a Wizard

With that in mind, the solution is:

A wizard is good precisely for these situations where the next input depends on the previous input –where there are multiple paths to completion.

Showing Progress in a Wizard

As for the general problem of showing progress in a wizard with variable paths, the solution is to use a progress bar and/or percent complete, not the number of steps. At any point in the wizard the percent complete is (Number of Steps Completed) / [(Number of Steps Completed) + (Maximum Possible Number of Remaining Steps)]. In your case, it’s 0 / (0 + 3) = 0% done on presentation of the first page, 1 / (1 + 1) = 50% done on the last page after selecting Option 1, and 1 / (1 + 2) = 33% done on the second page after selecting Option 2, followed by 67% when getting to the third page. In other cases, the progress won’t be linear like yours, but at least it always increases and, besides, users are used to percents and progress bars not being linear with computers.

However, if you are required by the style guide or whatever to show a list of numbered steps, then you have little choice but to insert the step. However, I wouldn’t give it a whole number, forcing you to renumber all subsequent steps. I’d number it “1a” or “1.1” or “1½” –whichever makes the most sense to your users. If possible, insert the new step with some brief animation to keep it from being too jarring, and your users might be okay with it.

Then show the design to whoever required step numbers in a wizard. While you’re at it, ask him/her what’s supposed to happen if the user clicks on the Step 3 tab after selecting Option 2 in Step 1. Maybe then they’ll get the clue that wizards shouldn’t have tabs, numbered or not.

Alternatives to a Wizard

It’s possible you don’t want to use a wizard. In general, wizards are for complex tasks that are done rarely. If this task is done regularly, then consider alternative designs. For example, take the input controls from the second tab and put them below the drop down on the first tab. The fact that they are dependent means they are related and should be on the same tab. Maybe draw a border around the dropdown and dependent controls to emphasize that they are related. Disable the dependent controls when one option is set in the drop down, and enable them when the other option is set.

In your case, it looks like users use the Logical View window to specify a model under Option 2, which alternatively (with Option 1) the users do with a drop down. You could use something I call an “assignment dialog.” A familiar example of an assignment dialog is the “Browse” button and dialog to select a file. You show the current/default model in a text box. Beside the text box is a command button. It could be labeled “Browse,” but maybe something else makes more sense to your users. When the users select the button, it opens a dialog featuring your logical view to select a model to fill the text box.

I’m not clear what the Option drop down does, but maybe you can eliminate it. Instead, you always show the Model drop down, which also always includes the “Browse” (or whatever) command button. Users decide whether to use the drop down or Logical View by whether they select the dropdown button or the command button. With this approach, you may be able to consolidate everything to a single main window with a drop down, a command button, and whatever is in the last step (if it's a "congratulations" page, just eliminate it completely -"success" pages are largely deprecated even in wizards).

BTW, assuming you keep the Options control, see if you can replace the dropdown with radio buttons. With only two options, radio buttons don’t take much more space, and they're easier to read and use. It would also allow you to signal which specific option is associated with additional dependent input (e.g., by the dependent controls being under or beside the specific option they relate to).

A Dropdown with just two options isn't the right way to go consider displaying both the options with radio buttons. Using tabs in a wizard wouldn't be appropriate. Consider something like this . 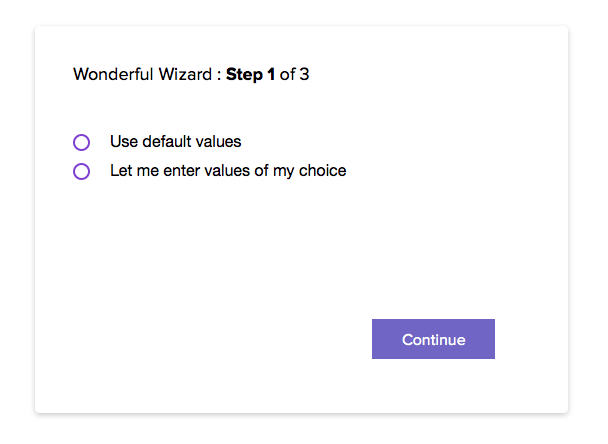 It will be a better to convert the tab into one additional step.

Considering the user cannot navigate to the second tab, keep it disabled. When conditions to enable it are met, enable it and provide a fade-in animation such that the user notices the change. Keep it simple! :)

Not the answer you're looking for? Browse other questions tagged wizard dialog or ask your own question.

2
A dialog to set up working hours
5
On a form wizard step what input type/s shall I use for when there are two options?
0
Three level hierarchical data - How best to structure hop navigation at any level when wizard is stepping at the second last level
0
Selecting hierarchy in wizard
0
is it wise to create a popup screen in a wizard?
3
Create sub-objects within wizard
3
Wizard - Optional steps now or later?
4
Navigating out of wizard flow
3
Editing of individual items and saving them
1
How will you manage this step inside a wizard? Hard level: external plugins and valid signatures certificates needed