Does anyone know of better terminology to differentiate between describing:

Update: There are some good ideas below - but it would be useful if this question could be updated as things evolve to produce a common terminology...

For stakeholder communications, rather than academic rigour I have found that

This has been somewhat useful, wouldn't mind improving it too though :)

"Persona X does not understand the User Story we are asking them to make, because ..."

This can go in many ways. It's really hard to answer, particularly as there are mere two examples.

But as an attempt, consider the following model. 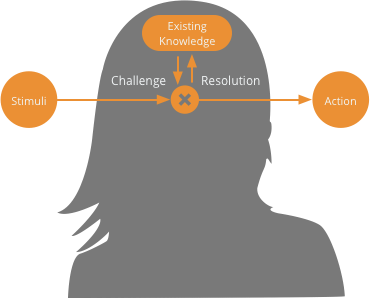 Basically, any stimuli we're exposed to goes through a process of correlation (or pattern-matching) with existing knowledge. If a match is found, then the input challenge is said to be 'resolved'. Sometimes this means we understand something (internal effect), sometimes it means we make a decision that leads to an action (external effect).

The main point is that cognition in response to stimuli is 'generative' (a term borrowed from visual perception theories): it's a fusion between our senses' input and our existing 'knowledge' as determined by our past experiences.

Now I guess by 'detailed' stuff, you mean that the stimuli are flawed. This will cause a problem with interpretation - one cannot link a low-level stimuli (like a button label) to a higher level semantic (like what the button does). Yet, interpretation - the ability to recognise things for what they are - is a relatively 'simple' process. Misinterpretation issues are often easily solved.

On the other hand, if the stimuli are fine, but users have no existing high-level knowledge to make use of them, users are said to be lacking an appropriate mental model. This is a much bigger problem, since establishing mental models typically takes effort and time.

Somewhat related is the concept of comprehension - the high level ability to understand complex problems.

X has a coefficient of 7

For someone who doesn't know what coefficient is, this sentence (arguably) pose a problem of interpretation. It can easily be fixed by rewriting: "X is multiplied by 7".

While the dynamic range of floating-point numbers is beyond any practical calculation mankind will need, the signal to noise ratio of each sample is never greater than the resolution of the mantissa + one bit.

Well... this sentence will be crystal clear to people who are experts in digital audio, but it would take a good 5-day seminar to explain it to the layman. Neither the terms, nor the comprehension of what they stand for and how they link together is part of the layman's mental model.

So you really have two sets here:

Again, it's hard to give a more definite answer without more examples. But I'm inclined to say it's more of an interpretation vs mental models case.

What did the user expect?

All frustration comes from unmet expectations so when a user expects something to happen and it doesn't then frustration occurs. The level of frustration will be different depending on the person and the situation.

Why did the user expect something different?

If an "unclear label" (detailed stuff) is the reason a user expected something different -- frustration occurs!

If "not understanding the underlying process" (structural stuff) is the reason a user expected something different -- frustration occurs!

Either way the outcome is the same but the remedy is so very different (i.e. changing a label is easy while changing the underlying process is hard).

This is one reason why making a distinction matters and consequently the reason I would use terminology that describes how hard it would be to change it.

On the surface, fixed by rearranging things or applying makeup. (1 or 2 days needed to fix it)

As far as this user is concerned you simply aren't doing it right. Major rework is required to the entire system. (months or years needed to fix it)

This is an interesting question. I can think of lots of ways to answer it.

Perhaps one way to think of is along the lines of dependencies.

Anything that can be fixed in and of itself, such as label that needs to be rewritten could be considered to have no dependencies.

A bigger UX issue where many elements, flows, pages and content may need to be changed could be considered to have a lot of dependencies.

This could then be placed on a continuum as needed.

The benefit of this is that for most items that have no depencies, you can set those aside as low-hanging fruit for someone to grab and fix as they can. There's little risk to these affecting the overall product so a lot easier to get in to subsequent builds/iterations.

The ones require a lot, however, then need to be brought up to a much higher level and worked through with likely many stakeholders and teams.

To me, this is a hierarchy (from big to small):

Overall/Conceptual UX — epic tasks, involving many people and many services

You can apply the Conceptual, Semantic, Syntactic, Lexical model from the HCI literature. The user's overall grasp of system function resides in the conceptual and semantic levels. Details, like button text, fall on the syntactic level.

Of course it's best not to mix the above two models, as they use the same terms in different senses.