What is the reason arrows are interpreted as direction?

What is the reason arrows are interpreted as direction? Is this a cultural thing or is there something profoundly intuitive to it?

Arrows have been an indicator of direction for so long that it's hard to say for sure, but my guess would be that an arrow fired from a bow only has one direction it can go, lending ease of communication when direction is needed. And since bow & arrows have been around long enough, and in practically every culture it has basically become universal.

Is the arrow symbol truly universal?

The United States launched two spacecraft in 1972 and 1973 with a message for any alien species that might encounter them. The message was specifically designed to be universally interpretable. It built up it's own number system from scratch using the fundamental properties of the Hydrogen atom. The goal was to communicate where Earth was in the universe and what sort of life humans are. There was one symbol, however, that was criticized for being too human-centric: the arrow. 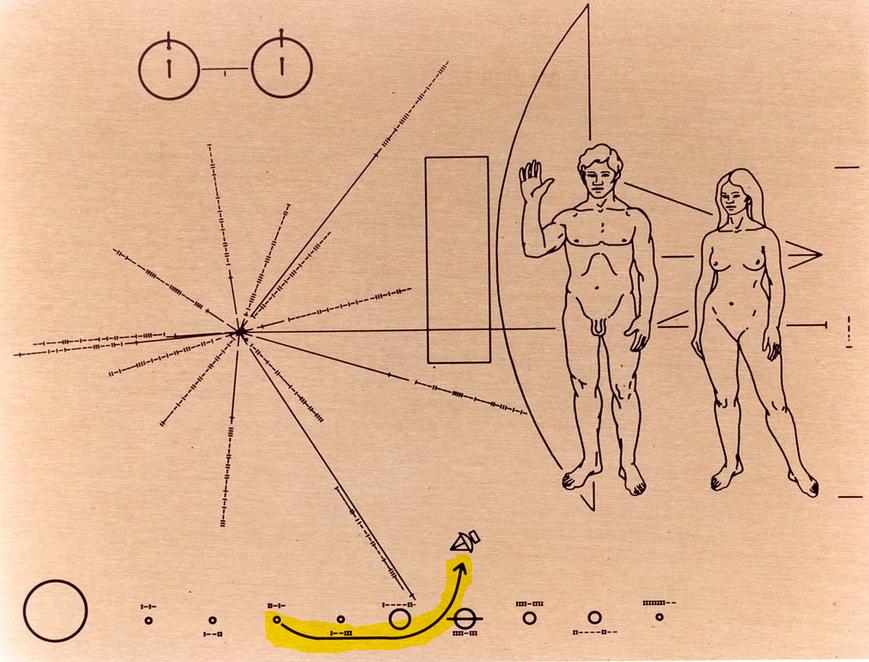 I would say that the arrow is indeed a cultural thing and only makes sense in a hunter/gatherer mindset. Anyone who has hunted or benefited from a hunt understands the importance of focusing on a target with a long straight pointy object. Arrows, as a hunting tool, are only effective in a single direction and usually have a single target so it's easy to see why they would eventually play a role in other forms of communication.

Some cultures even point using their middle finger which mimics the shape of an arrow:

A pointing finger indicates direction ('It's over there'). For a long distance, the finger may be pointed diagonally upwards, as if firing an arrow. The index finger is usually used, though the middle finger or even all fingers may be used.

The thumb may be used as a pointer to something being jerked over the shoulder.

People who are angry tend to point more, including at themselves (when they feel hurt or insulted) and at those who they feel are to blame.

Pointing, especially at other people, can be particularly rude in a number of cultures.

In some cultures the thumb is a phallic symbol and giving a 'thumbs up' signal says 'I want to have sex with you.' or may just be a rude insult. This can cause a lot of confusion between people from the Orient and the Occident.

How old is the arrow?

The Smithsonian Institute places the first arrows at around 71,000 years ago! 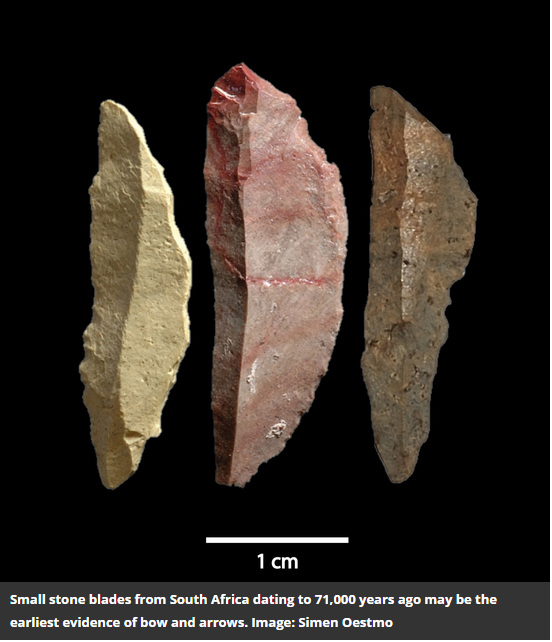 When was the first recorded drawing of an arrow?

The drawing below dates between 2,000 and 4,000 BC and although people were probably using arrows to indicate direction before then it's the earliest written form I could find. 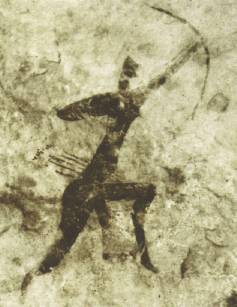 Anyone reading this post (on planet Earth) can be traced back to a period where hunting meant survival. Consequently, the arrow became a universally understood symbol by anyone who has ever benefited from a bow and arrow hunt. Which may or may not include aliens... 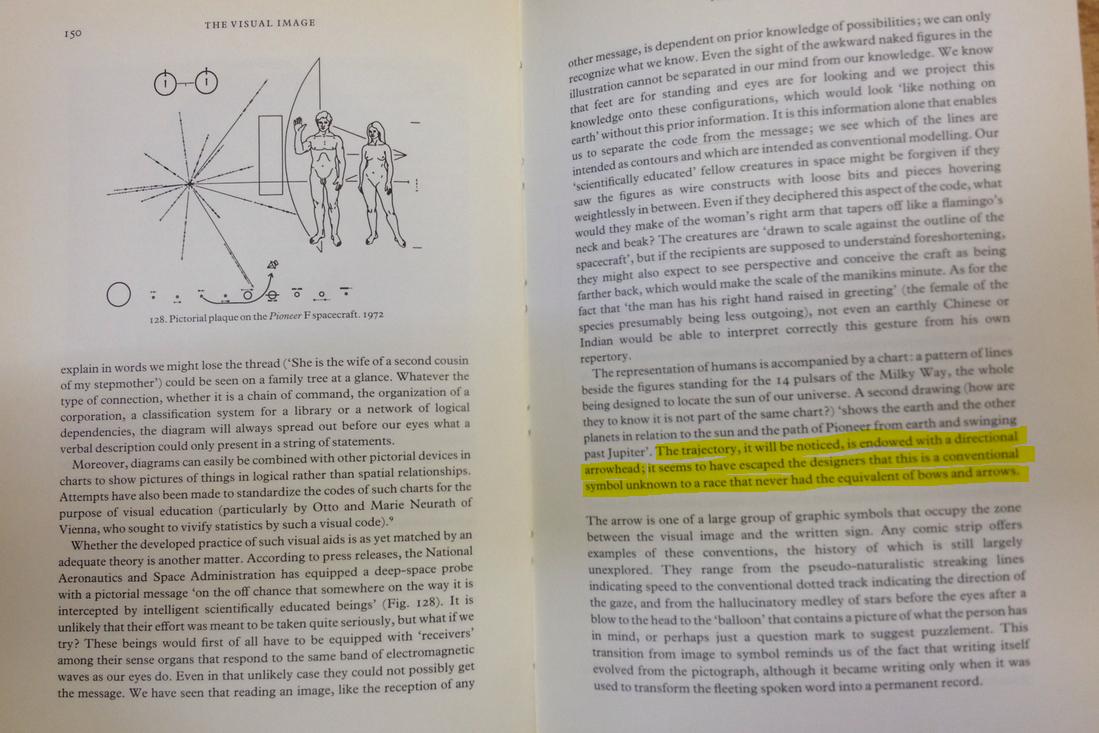 Just to offer an alternative hypothesis, the fact that the basic shape is two lines converging on a single point, might have something to do with perspective: 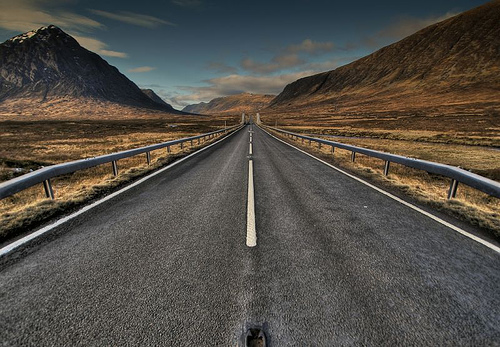 In this case the sense of direction is created by our very own direction. There may not have been very many highways in paleolithic Africa, but the plains may well have had some similar features. At the very least, simple roads existed by the time symbols began to emerge.

I don't expect this was a conscious choice in any way, but since our visual cortex is fine-tuned for observing just these kind of depth cues, to help us reconstruct a 3D world from a 2D signal (cf the Ponzo illusion), it may help to explain why the arrow evokes such a strong sense of direction.

Addendum Some examples our ancestors might have come across: 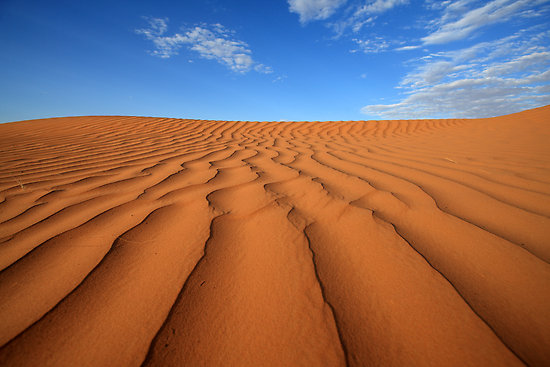 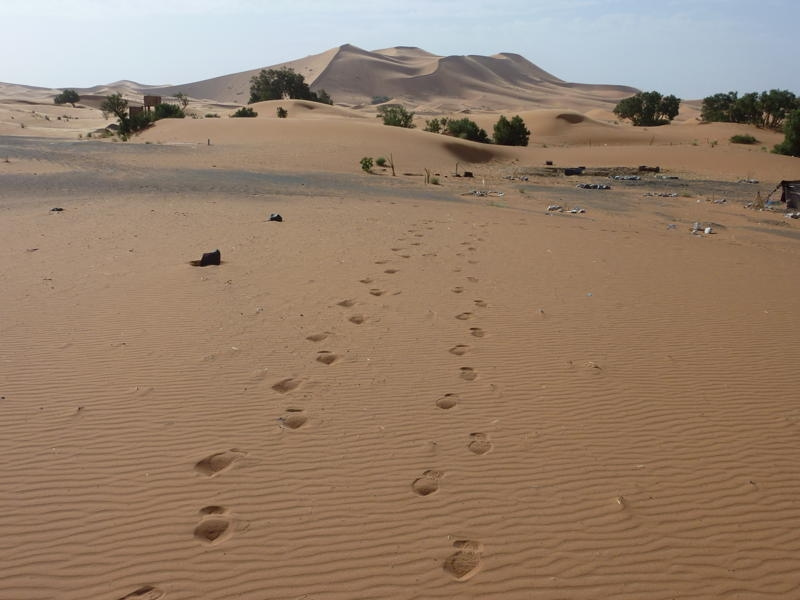 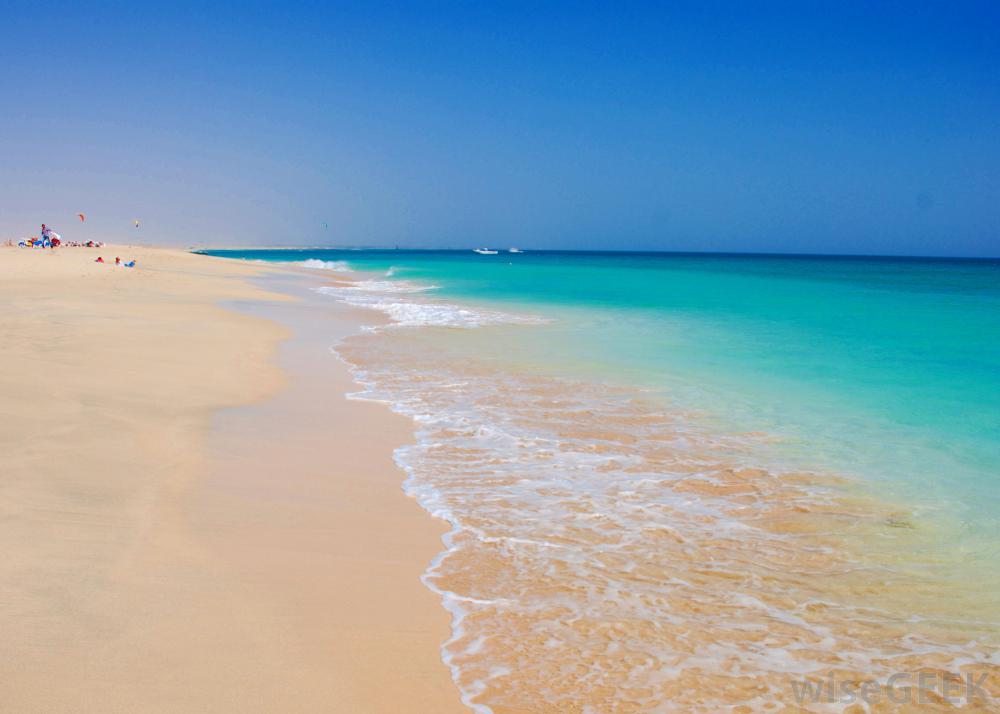 I'm cherry picking here, and searching for evidence to fit a hypothesis, so take it for what it's worth. The footprints are particularly notable, I think, because early man would hunt by stalking animals, so following footprints is a key survival skill, and an important indicator of direction.

I think the Arrow symbol is pretty universal, even without spears or perspective.

Easy task: Specify a certain point / direction with colour on a wall. If you just paint a Dot it is hardly visible. A line may provide direction, but is ambiguous as it points in two directions. The best way to explicitly point to one direction/think is having multiple lines, which point to the same target, so two or three lines converging in a single Point will specify a direction.

If I use colour to paint, I will also have a thick base where I start painting and result in a small pointy edge where I finish - this will also have a shape which reminds of a broad arrow: I believe an abstract arrow shape could easily have developed from these crude pre-forms of pointing forms. 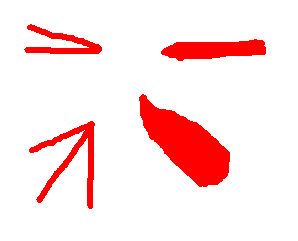 Physically, arrows go in one direction--the direction of the point at the end.

A drawn arrow is a representation of a physical arrow. It's an object that has been known to mankind for most all of human history. Most people would intuit the direction from the pictogram.

What are the reason arrows are interpreted as direction? Is this a cultural thing or is there something profoundly intuitive to it?

I think it’s actually both so the answer is two fold:

Intuitiveness is directly linked to affordance or rather perceived affordance.

So how did the arrow come to exist?

We could safely assume that in a hunter-gatherer society the use of objects based on their actionable properties would have been an essential survival skill. Stone blades are a case in point here as their actionable properties lend them to a number of uses: If we are to describe these properties, these blades will acquire a number of adjectives such as penetrating, piercing, sharp etc. that of course goes to reinforce its possible usage for example carving, hunting etc

At some point in the evolution humans were able to combine objects based on their inherent actionable properties to create tools, and through usage these tools became culturally embedded. The arrow is a prime example of such a tool; stone blade as an arrow tip combined with a shaft (light weight wood) and feathers to help to pull the arrow into line and increase accuracy of the projectile.

So affordances help shape everything that goes into an arrow, the same of course applies to the bow created from bendable wood and animal guts to provide elasticity. so all what's left for the arrow is to find its target!

While affordances help shape tools the representations of these tools is a matter for semiotics, which brings us to culture.

We seem as a species to be driven by a desire to make meanings: above all, we are surely Homo significans - meaning-makers. Distinctively, we make meanings through our creation and interpretation of 'signs'. Indeed, according to Peirce, 'we think only in signs' (Peirce 1931-58, 2.302). Signs take the form of words, images, sounds, odours, flavours, acts or objects, but such things have no intrinsic meaning and become signs only when we invest them with meaning. 'Nothing is a sign unless it is interpreted as a sign' 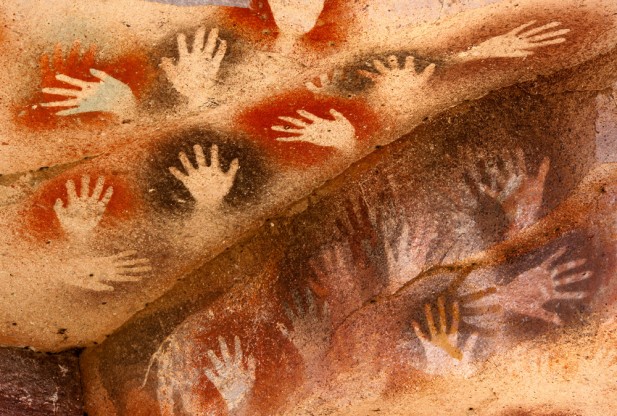 According to Pierce: signs are divided into three categories, indexical, iconic and symbolic, these categories are based upon the relationship between the signs and the objects they refers to.

The index, literally meaning “to point out or to indicate” has a direct relationship to the object it refers to; for example footprints on a sandy beach or smoke emanating from fire.

The icon is a sign which preserves resemblance yet has no direct connection to its object of which common examples are most of road signals as well as computer icons, these are visual re-presentations.

Finally, the symbol is the most abstract of these Signs as it is arbitrary and based on a convention of use such as languages (although some languages are iconic). Symbols are also re-presentations.

The arrow acquired significance and meaning because of its inherent properties which are (related to the index), historical usage and most importantly from symbolism attached to it through representations that are either iconic or symbolic. For example :

Native American Indians were a deeply spiritual people and they communicated their history, thoughts, ideas and dreams from generation to generation through Symbols and Signs such as the Arrow symbol.

Visually, the tapering form of an arrow also justifies its use to indicate direction since the visual asymmetry interests and guides the viewer's gaze along itself. The biggest thing in common between arrows represented like this →, ▶, ➢, or much more abstract shapes is the taper. Why does the human eye naturally respond to this particular asymmetry/taper by following it as opposed to looking away from it? That may be a question more suitable for biologists and neuropsychologists to answer.

Circles, on the other hand, have no beginning or end and hence no direction to follow: they may be points of interest in themselves but will guide the gaze to a stop, not conduct it further. Lines without arrows have a beginning and an end--but which is which is up to you to decide, if at all. As such, they are visually direction-agnostic. They demarcate space/length without favoring any particular direction.

Further to this, it can be surmised that direction could be interpreted from the drawing of a line in a particular direction (the action of drawing the line from East to West for example indicates "to the West"), BUT once the action of drawing the line is complete, there is no way to indicate what direction the line was originally representing (say to a later party who saw the drawn line), and therefore movement needed to be "captured" in the image.

As many people have already stated the reasons for an arrowhead come from the fact that arrows are likely the earliest understanding of "something that can only go in one direction" and so were used.

Not the answer you're looking for? Browse other questions tagged gui-design guidelines or ask your own question.

12
Is it a problem if a word describing a software action has additional controversial meanings in the real world?
3
What is the best way to show Log Information of user actions
3
HUD UI design - what drives the line and transparency theme
1
What are the alternatives to dragging items to add to data view?
1
Should "expand" arrows point towards the expanding content or away from it?
11
Why are the titlebar buttons on the left side in OS X?
1
Should Up Arrow increase the value or decrease it?
2
Is there any logic when arrows are used before or when after the content
2
Is there any reason not to change the style of web radio buttons and check boxes?
0
Direction of dropdown arrows when the relative position of the UI component and content is reversed