I have a blog that focuses on listicles that's very image heavy (eg. 10 Cats That Looks Like Madonna). And I'm trying to make it as "share friendly" as possible. 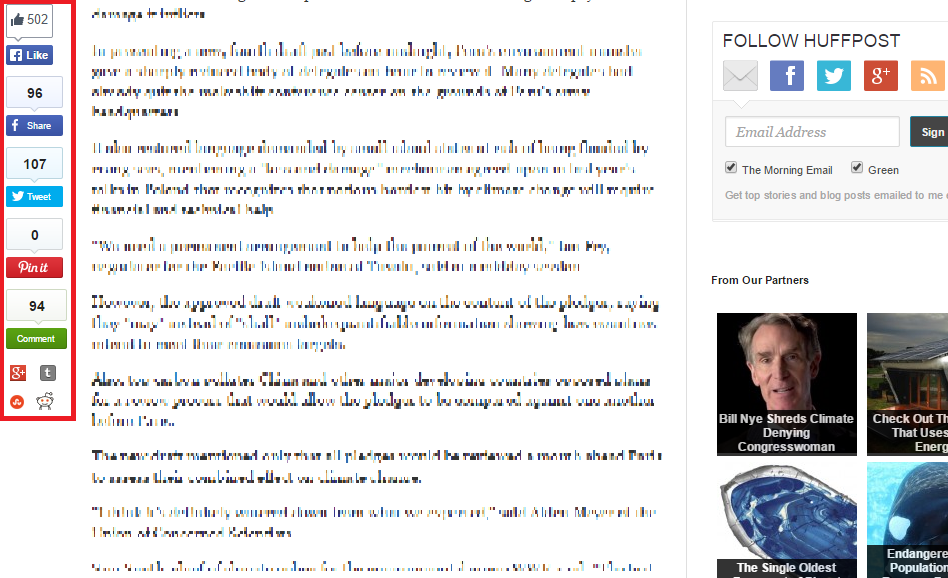 This design seems to be popular among most sites.

However, what I've noticed is that sites like Buzzfeed, ViralNova and Distractify that are more image heavy don't have fixed share buttons at all. Instead they have their share buttons pop up whenever you hover on an image. 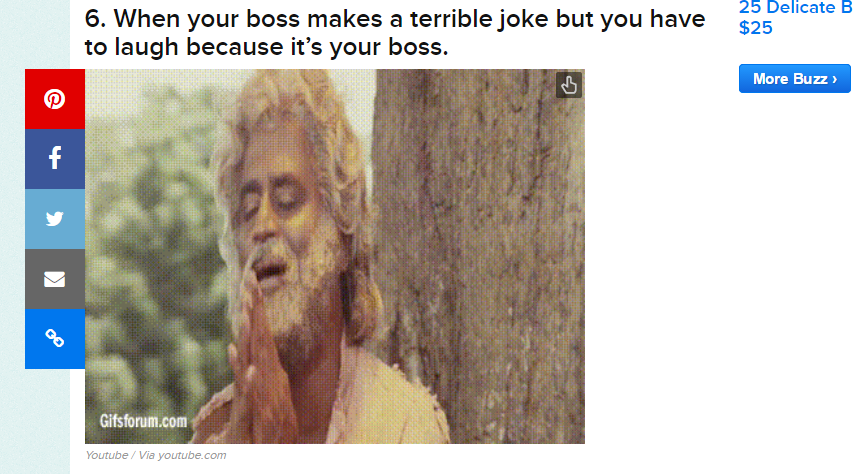 I'm wondering what benefits this has over the standard floating buttons design?

My guess is having the share buttons "pop up" catches the user's attention, but so does having a floating bar follow you around.

Upworthy claimed hovering buttons increased their shares by 398%. But I'm a little skeptical as they have now changed their design to floating.

Another benefit I could think of is that hovering buttons allow users to share different parts of the article. But how important is that to the user?

If controls float with users' scrolling, it can be irritating, specifically in the case of image-heavy services that tend to overload their users with visual content. I prefer sharing buttons to appear on hover, they tend to steal too much attention from the content and should be an opt-in.

Hovering an image (video component etc) when you need to operate it is a conventional behaviour, so there's no need to worry users won't find it.

I am really bad person to answer this as I hate both social media and "listicles", but the benefit of "pop up" is simple enough. They save space. Basically, if your site has lots of separate items you want people to share separately, it becomes desirable for every item to have separate sharing option without more than one being visible at a time. So if you want images to be shareable individually putting the relevant options into a pop-up would be reasonable. If you just want the "listicles" to be shared, floating is easier to use. It all comes down to how many shareable items you want to have at the same time.

Not the answer you're looking for? Browse other questions tagged website-design usability user-behavior buttons social-media or ask your own question.

6
Social Media Icons - show all visible, or group under "share"?
7
Optimal placement of share on Twitter/Facebook/social media widget on web page to encourage use
24
Are grayscale buttons with icons usable and effective?
5
Should a site have separate buttons for social media sharing and following?
15
Can I use "Prev" instead of "Previous" on a button?
2
Form with both save and submit buttons
1
Is there a recommended and consistent way of adding social buttons?
1
Notifying users of incomplete data in hidden fields when moving orders from draft to submitted
2
Does a floating sidebar decrease usability?
2
On some screen sizes the CTA goes below the fold