Any good examples of how to show an overview of the status of multiple items moving through a process?

I'm working with a client on the design of a tool runs an analysis on school data and presents the user with reports that help them support their schools This is the process a user goes through:

During this process, schools can be in these different sates:

As a user is looking at their report, it's helpful to know that their schools are in different buckets because some of their schools will either not appear in reports, and some schools appear in some reports but not others.

For this reason, I want to give the user an overview of where their schools fall in this process. Below is my original design.If a user clicks on the blue status bar, they go to a table that has more details about which schools are in each of the buckets. 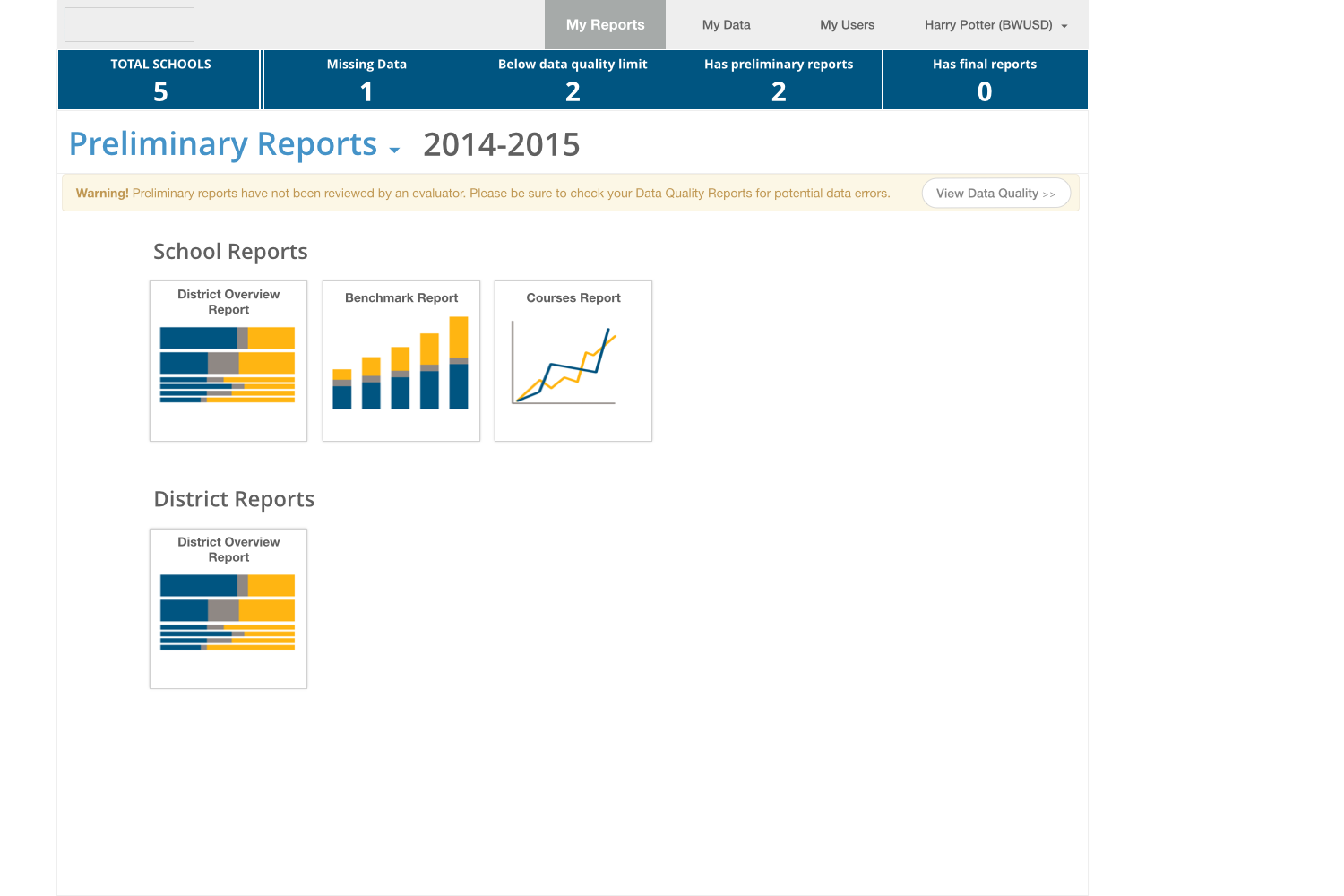 I'm not really satisfied with this design, so was hoping to get input. I also got the following feedback:

Below are some iterations I considered. Thanks in advance for the help! 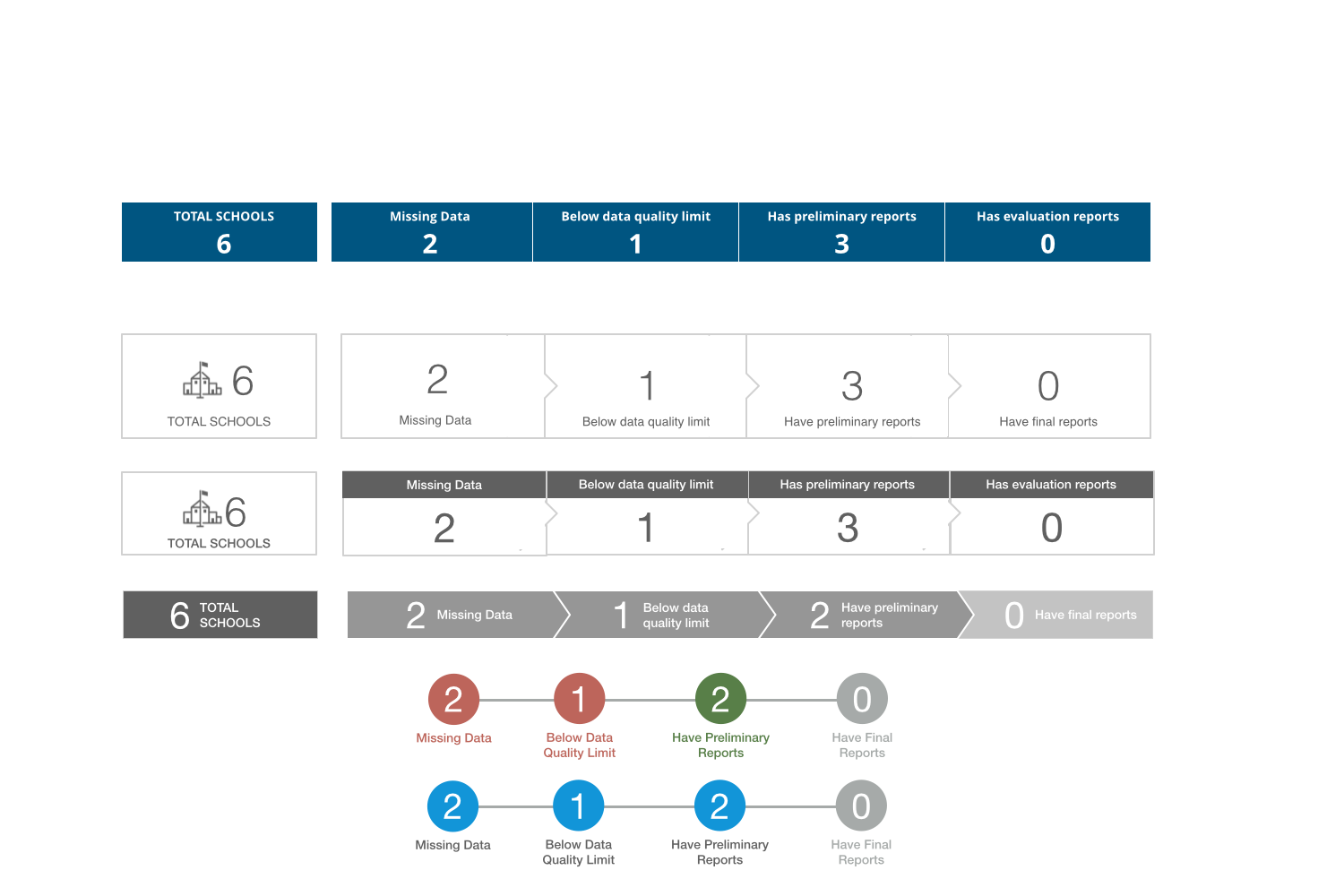 There are a few "pipeline" or "sales funnel" management platforms/services that are probably worth looking at regarding their UI and UX.

While their end goal and content might be different, the way they display what is in the "pipeline" and give overview stats, could be applied to most process management occasions.

I do like the design you have already, perhaps adding colours to highlight the severity of each step (Red, Amber and Green), would help highlight.

I definitely recommend going with colors & possibly also icons for the various stages in your workflow, especially if you're going to refer to these same states/stages in multiple screens on your app.

For example, if you're going to want to list down all the schools along with their respective states, you may want to consider an interface like this one we came up with our social media content management app. 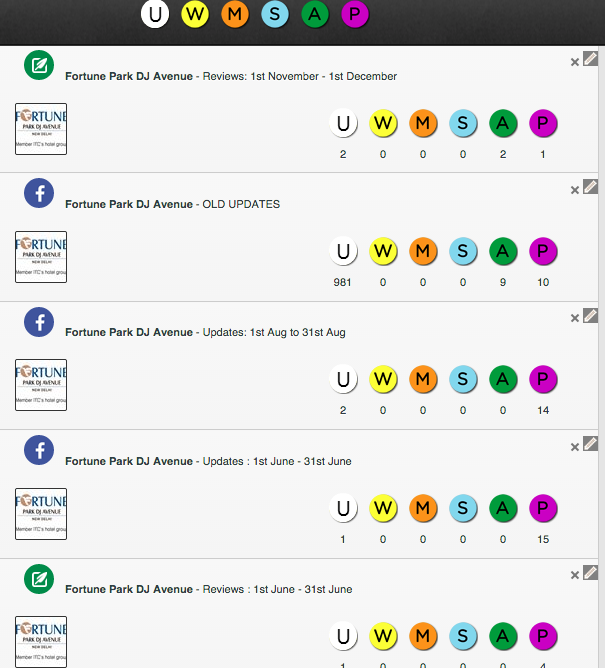 Here, we tried capturing the workflow of a post from Unwritten (U) to Written (W) to Moderated (M) to Scheduled (S) to Approved (A) and finally to Published (P). I know this may seem overkill for you at this stage, but it helps to plan out exactly where you're going to refer to these states/stages in your app, so you can accordingly decide how much real estate it requires, and whether it's an ever-present fixture in your header or somewhere.

Hope this helps. I liked your 5th version, but I think you're going to want to signify the relative positivity/negativity of each state. Do share what you finally came up with if possible :)

Not the answer you're looking for? Browse other questions tagged progress-bar status progress or ask your own question.

6
designing an "online / offline " status indicator and examples of existing ones with good practice
1
From which direction should a modal progress bar enter the scene?
2
System status and availability best practice
9
Messaging a user success and error messages at the same time
0
Nonlinear Wizard Progress Tracking
3
Progress Indicator for Slow Progress Process
173
At what point does a user lose trust in a Busy Spinner?
1
Detailed progress indicator with different states
3
Progress bar - single or multiple for multi-step process?
1
Overview of daily status for list of items