I want to read about floating popup menus that are customized to fit my software (not for a webpage) - in the same manner that Maya does this: 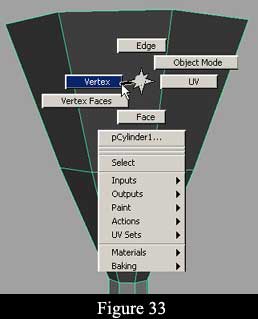 The popup menu should appear on right clicks and I want to know:
When to remove the menu?
How many items are ok to show before the user feels that the menu is to bulky?
How to place the different icons and text buttons for an optimal user experience?

My software can't use keyboard shortcuts - hence the reason to place undo and redo on that menu.

this is a quick sketch of my idea (the mouse cursor is the white in the middle): 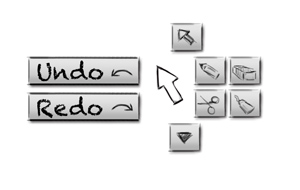 I appreciate all hints, links and such that can help me develop this kind of menu....

Maya’s “hotbox” menu system has apparently been subjected to fairly extensive evaluation, so you can use its characteristics as a starting point for testing of your app. You can read more on the designers’ rationale and lessons learned in developing hot box in:

Note, however, that what they describe looks different than the "Figure 33" screenshot you're showing.

The “safest” approach is to follow the conventions of a context menu (what usually appears with a right-click) and remove the menu when the user clicks either on a command in the menu or outside the menu, the latter being the means to cancel selecting a command. This should be consistent with most users’ expectations and will be thus be discoverable.

The chief alternative is to use a “quasi-mode,” where the menu remains visible only as long as the user is actively sustaining an action. In Maya, this is action is holding down the space bar. This makes dismissing the menu naturally easy and discoverable –if you don’t want the menu, stop doing the menu-action.

You may be able to do this with right click (show the menu as long as the user holds down the right mouse button), but there may be a few issues:

Instead of right click, you could use a key like Maya does. This gets around all of the above issues. A user can easily hold down a key with one hand while slewing the mouse any which way with the other. It also allows the user to select multiple commands in sequence without needing to re-display the menu each time. That's apparently a major advantage for Maya, and may be good for your app too.

It’s understandable that you can’t use the space bar like Maya does. If you have no menu bar, how about using the Alt key? Normally the Alt key provides keyboard access to the menubar, so it may already be tied to “menu usage” in some of your user’s minds. Nonetheless, any use of a key will have discoverability issues, and you need to make it clear to new users. On the other hand, once they learn it, I bet they’ll never forget it.

Hot box was designed to accommodate a large number of menu items. Maya apparently shows about 30 menu items (of which most apparently open cascade menus for more items). This is consistent with research showing that you can have such large numbers of menu items on a single menu as long as you visually group the menu items into related clusters, as Maya does.

Your main concern is not so much the number of menus as the size of the area covered by the menus. You can reduce the area while still having a large number of menu items if you make the menu items small, but this makes then harder to read (due to small font or the use of icons*) and slower to click. Transparent menus are likely necessary for a large number of commands (e.g., over 12), but even with transparency, you’re going to somewhat obscure the background the user may want to see. The optimal menu size depends on what users need to see behind the menu.

You need to balance two issues:

Fortunately with a pie menu like you’re proposing, you have substantial flexibility. You have at least four locations close to your pointer (left, right, above, below), so you can have four main groups of commands where each can have its most frequent command right next to the cursor. Can’t do that with a context menu.

There are also a couple things you can do to control speed of access independently of grouping.

If I had to guess, I’d say Western user will look first to the upper left from the pointer for menu items, so you also want your relatively more frequently use items positioned to left and top of your pointer.

Even more important is to be consistent across contexts: keep the same commands in the same place. One of the advantages of pie menus is that experienced users development muscle-memory for the commands, and execute them with a quick slew of the mouse without really looking carefully at the items themselves, in essence making a gesture-driven UI. Consistent command location encourages this.

*Maya designers apparently had more success with text labels than icons for their commands, even though Maya is a graphic creation application where one might expect icons to do relatively well.

I just stumbled across your posting while looking for a good screenshot of maya's cursor menu functionality to pair it with this java script tool:

It is limited to an HTML5 canvas but has big potential for implementing the kind of menu functionality you are looking for.

Microsoft Office introduced a similar context menu in Office 2007. Take a look at this behavior.

When the user right clicks somewhere, the context menu (aka pop-up menu) and a toolbox is shown next at a logical place near the working area, close to the mosue cursor.

The cursors distance to the context menu decides when the menu hides. The context menu fades out the further away the cursor is. (If it is important to have persistent pop-ups, then some sort of a "pin button" that can toggle on/off the hiding might be appropriate?)

I have only two words regarding how complex you can make this context menu: "Test it".
No guideline will ever give a good answer to this. Experienced users with a well organized menu can have several items, and novices need a simpler menu (if they will ever use this functionality). Establish a personas on the users' domain experience and computer experience and design some prototypes (it may well be mock-ups or hand drawn sketches). Test the prototypes, compare the results, and you know the iterative drill from here :-)

You could hide the menu on mouse release. (Works with option selected or without.) If an option is selected give it a positive feedback (eg a quick two times blink). I would arrange the object radial but not in two rows. I assume that two rows (two buttons next to each other) will result into selection of the wrong button. You could arrange like this: important stuff (=most frequently used) on the top left, and less important stuff on the bottom right. About the amount of elements/buttons: I'd go with a maximum of 8 elements. More might fell cluttery.

Not the answer you're looking for? Browse other questions tagged contextual-menu or ask your own question.

3
Context menu with non-clickable subheaders?
2
Hijacking the mouse pointer on context menus
2
Action in a context-menu uses selection of records
3
Android: Bye bye menu button? Should I now force the use of an on-screen menu?
5
How to indicate that there is a context menu?
1
What's the pattern name for: optional action menu after input
2
Remove or disable context menu items with multiple selected items?
8
Order of items in a context menu
1
Is the context-menu cursor a useful replacement for the pointer when opening a context-menu?
14
Are redundant close buttons on an auto-closing popup necessary?